The Ministry of Defence has contracted Leonardo and Thales to deliver an integrated Defensive Aids System (DAS) for Shadow R1 aircraft.

The procurement will equip the RAF’s fleet of eight Shadow R1 intelligence-gathering aircraft, providing an advanced DAS which will protect the aircraft against latest-generation of Infra-Red (heat seeking) missiles.

According to Leonardo in a release:

“Designed, developed and manufactured in the UK, the system provides a sovereign capability which will be able to evolve in anticipation of changing threats to air platforms.

The contract will be delivered by a combined MoD, Leonardo and Thales team under a Leonardo prime systems integration contract, with the equipment being integrated onto the platform by Raytheon UK.”

Initial Operating Capability is targeted for early 2021. The system consists of the following subsystems:

Leonardo say that the DAS brings together world-class capabilities in threat warning, self-protection co-ordination, countermeasures dispensing and in DIRCM.

Shadow aircraft, which are based on the King Air 350CER, are operated by 14 Squadron out of RAF Waddington.

Because of the ISR role of the aircraft, it may be required to fly through hostile airspace, necessitating protection from enemy forces.

A particularly deadly threat is heat-seeking, Man-Portable Air-Defence Systems (MANPADS), which are widely employed around the world.

The Shadow’s new defensive aids suite is designed to counter this threat, being able to rapidly defeat incoming missiles.

Which ISTR assets were they only just talking about selling off?

A couple of sidewinders as well would not go astray . 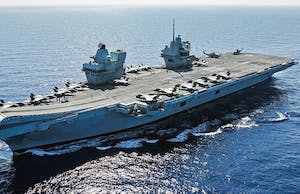 November 24, 2021
HMS Queen Elizabeth has welcomed 30 NATO ambassadors on board.