Home Sea UK should focus on export of systems, rather than just hulls says... 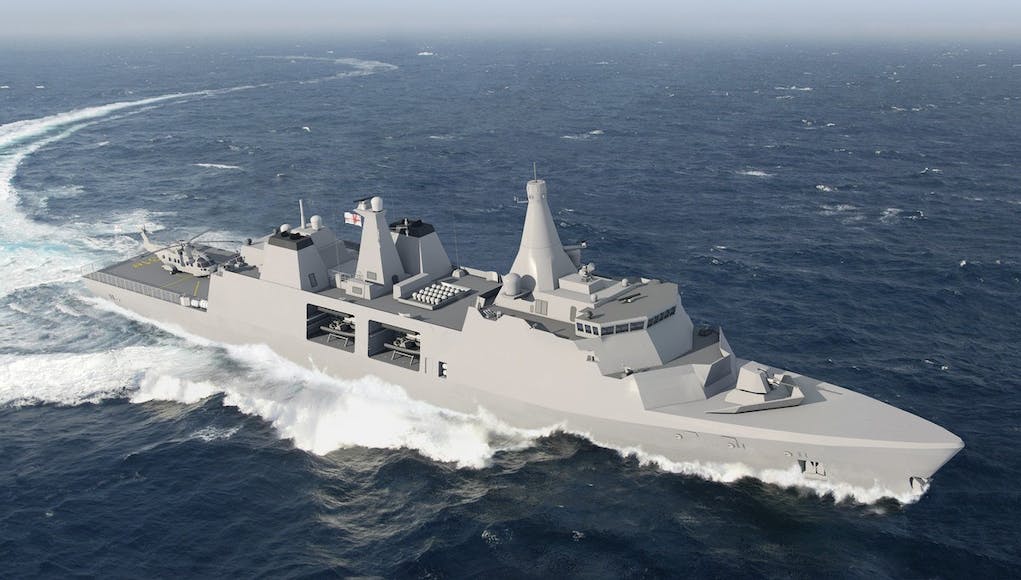 The Government should seek to place the capabilities of UK-developed CMS along with sonar, radar and other combat systems and armaments at the heart of Type 31e export strategy, advises a report.

The All Party Parliamentary Group has launched its report on the National Shipbuilding Strategy, the report can be downloaded here.

The report argues that the commercial value of mission systems and through-life support is ‘aptly demonstrated’ by the success of Thales TACTICOS combat management system (CMS).

“As of June 2018, the company counted 23 navies as customers
for TACTICOS, with more than 180 ship sets fitted or ordered across almost 50 different surface ship classes. The partially state-owned French multinational, through its Dutch subsidiary Thales Nederland, continues to evolve TACTICOS and expand its user community amongst nations keen to build up naval fleets.”

The report goes on to warn that the procurement strategy for the Type 31e seems to “overly focus on UK-based hull fabrication”, increasingly the element of least value within a warship, rather
than the systems which ultimately drive capability.

The report recommends that the Government should regard it as “a success if a foreign navy orders a Type 31e with the intention of building the ship in its own yards, while still integrating UK-made CMS”.

Thank you George for highlighting this section of the report. We get very passionate about the ‘old’ skills and jobs involved in shipbuilding and forget the high value, highly technical subsystems.

Who who would have thought.

Stop building hulls in the UK and focus on the high technology high value equipment that goes into the hulls.

That’s the Type 26 then,export design and subsystems,the Type 31 cheap frigate was all ways a fantasy there are many cheap subsidised ship yards that can weld hulls.

I didn’t think the uk mod was thinking of anything than getting ships quickly and at an affordable price before the type 23 start falling to pieces for those saying t31 should be abandoned could I ask what the evidence is that all of a sudden t26 can be delivered by 2023 within a cost envelope of circa £350 – 400 million per hull? Again if it can bae could have offered a cut down version of type 26 in the tender process instead of a stretched al khareef design. It sounds like someone is trying to push for Leander… Read more »

180 ship fits is nonsense. Thales claims to have a ‘Tacticos’ system on 180 vessels whereas in fact a ‘tacticos solution’ can be anything from a single missile firing control module integration (as with the Japanese destroyers), yet their website brochure claimed a ‘tacticos solution’ for the class?!? They’ve never actually put a ‘full’ CMS on anything larger than the Indonesian corvettes which have 18 positions and have never left the Indonesian economic control zone. The fact is, they don’t have the scalability needed by the RN. Granted, they are good at selling, but their ‘creative marketing’ is largely to… Read more »

Yes. Until maybe now, it was considered that a warship cost does not go up with just inflation but add another 7% due to new systems. So our warships look expensive. The hull build in the UK with new investment and tech will become increasingly more competitive if the UK government believes in the UK ship build sector as a whole and not just frigate sub and aircraft carriers (as if we are going to build a load more carriers soon, but a third would make sense). A question could be asked. Can we source cheaper just as good systems… Read more »

In the case of the RAN’s future frigate the SAAB 9LV/Aegis CMS combination, Australian CEAFAR radar and US Raygeon missile systems, Seahawk Romeo were all effectively mandated by the Australian government

UK to triple size of naval support base in Oman