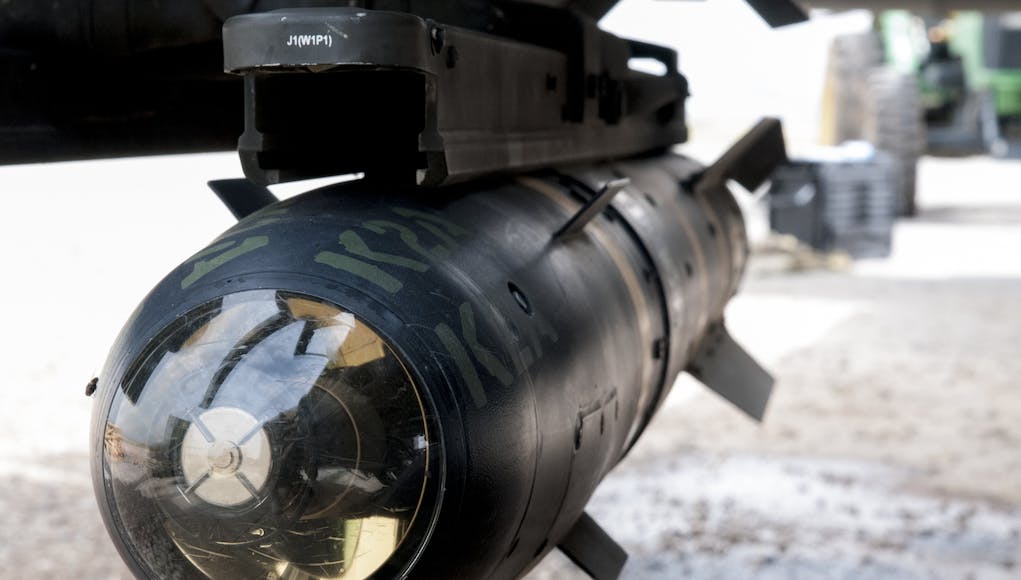 The US State Department has authorised a British purchase of three hundred and ninety-five AGM-114R2 Hellfire missiles for an estimated cost of $46 million.

The system provides heavy anti-armour capability for attack helicopters and Remotely Piloted Air Systems, the missile has a range of 8km and a 9kg warhead.

Since being fielded, the missiles have been used in combat by various nations around the globe and in British service have been been fired from Apache attack helicopters and Reaper unmanned aircraft.

According to a contract authorisation notice:

“The State Department has made a determination approving a possible Foreign Military Sale to the Government of the United Kingdom three hundred ninety-five (395) AGM-114R2 Hellfire missiles with support for an estimated cost of $46 million.  The Defense Security Cooperation Agency delivered the required certification notifying Congress of this possible sale today.

The Government of the United Kingdom has requested to buy three hundred ninety-five (395) AGM-114R2 Hellfire missiles.  Also included is technical assistance, publications, integration support, and other related elements of logistics and program support.  The estimated total cost is $46 million. This proposed sale will support the foreign policy and national security objectives of the United States by improving the security of a NATO Ally which is an important force for political stability and economic progress in Europe.

The proposed sale will improve the United Kingdom’s ability to meet current and future threats by replacing expiring and unserviceable missiles and maintaining capability to execute missions across a full range of military operations.  The United Kingdom will have no difficulty absorbing these missiles into its armed forces. The proposed sale of this equipment and support will not alter the basic military balance in the region.

The prime contractor will be Lockheed Martin Corporation, Orlando, Florida.  The purchaser typically requests offsets.  Any offset agreement will be defined in negotiations between the purchaser and the contractor. Implementation of this proposed will not require the assignment of any additional U.S. Government or contractor representatives to the United Kingdom. There will be no adverse impact on U.S. defense readiness as a result of this proposed sale.”

It is important to note that this notice of a potential sale is required by law and does not mean the sale has been concluded.

Is there a cheaper weapon to take out a Toyota Hilux ?

I would say Martlet/LMM would be ideal for taking out a Hilux and a lot cheaper, however at the moment I believe it is only planned to be fitted to RN Wildcats. The 30mm gun on the Apache would also work well, although I guess that would put the aircraft more likely in harm.

Yes, for an attack from an aircraft, close up would be either a 30mm cannon on the Apache, or the 27mm on Typhoon. From distance there are a number of options, these are the LMM(Martlet), APKWS and CVR7PG. All three have an effective range of about 8km. The Martlet is a viable alternative, but either of the 70mm rockets with the precision guidance kits fitted to CVR-7 or Hydra are a much cheaper solution.

Isn’t it horses for courses? The UK has spent significant sums integrating Martlet into helecopters over and above, as I read it, the development of Martlet itself. So if it’s low cost per unit, the overall development cost must be significant.

One presumes that Hellfire is aimed at heavier targets and the cost of 46 mil, at about 117, 000 each, is less than the 90mil cost of integrating Martlet into 28 Wildcat helicopters (say ThinkDefence).

Brimstone is similar cost to Hellfire (?) But has a longer range.

So is it all horses, courses and apples, oranges etc…?

The Yanks are paying $70k per missile, why are theycosting us 65% more per missile?

90 mil to integrate Martlet, that’s outrageous. No wonder we have so few fking missiles and so few Helecopters. There are times I think we would be better buying everything off the shelf from the US. We would more than double the amount of armoured vehicles, aircraft and missiles we have at our disposal. Quadruple that if you include the amount spent on R&D.

Yes I thought that too. So maybe the source is wrong.

Let’s subordinate ourselves to the USA in every aspect of defence. Not like they’d pass the McMahon act, is it ?

Sovereignty doesn’t come cheap. Personally I think it’s worth having, not least because of potential exports. Once more we can learn from the French.

Absolutely, no more brown nosing those that would have us as slaves!

Good question. Unguided rocket pods used to be all the rage in the cold war!

But not so accurate, so several need firing & even then may all miss.

A packet of nails from B&Q should do the trick…!! 🙂

So am I wrong to suggest Brimstone cannot take out heavy armour? Is Brimstone not based on hellfire?

It was designed as an anti-tank missile. The shaped-charge warhead weighs only 14 pounds and is optimized to penetrate armour rather than throwing out shrapnel over a wide area.

It can be used on either the Apache or Typhoon and has dual-mode laser and millimetre wave guidance.

Brimstone 3 is undergoing testing at present and is due to enter service in the mid 2020s I believe.

Thanks Nigel,
As previous posts on the subject it seems to be an integration problem on US kit.

Yes the cost of integrating Brimstone on some platforms has not been deemed worthwhile sadly. As you say American ones for the most part which of course are (in these cases) already integrated with Hellfire.

The Birmstone has been successfully test fired from an AH-64E, in 2016. Since the UK fleet of the E variant will only be adopted from 2022 onward, we might yet see Brimstone integrated in that time to the E platform (one can hope at least).

To add to Nigel’s post. Brimestone has a programmable precision effects warhead. This is because Brimestone, originally designed for aircraft such as Harrier and Tornado to take out massed numbers of tanks in one pass. It has developed into a true multi-use weapon. So can now target not only tanks, but UAVs, helicopters, bunkers, fast attack boats and has the precision to be guided through windows on buildings. The warhead has various modes, like Hellfire it can be used as a top attack weapon or as a direct attack. But it can also detonate at a specified time and in… Read more »

Thank you for this answer Dave

Probably the large amount of money the uk would have to pay Boeing to integrate it with apache and jump through all the hoops needed to certify it for use…. i doubt the software is sufficiently close in brimstone and hellfire to be plug and play even if it can be bolted on and dropped easily.

I don’t think it is integrated onto our Apaches. Test firings done a few years back but not full integration as far as I can see.

I think for the RAF Reapers we’ve only tested Brimstone but still use the Hellfire. Happy to be corrected on this.

First test firings were completed in 2016, enjoy the launch!

Nothing other than the cost per missile possibly compared to Hellfire?

US Army is deploying Israeli Spike long range version in their AH-64, they want more range that Hellfire cannot provide, also makes possible to firing behind a hill.

Seems a bit one sided relationship the UK as tried several times in the last decade to get the US interested in Brimestone. I guess it would have been a threat to US defence companies had the US ordered Brimstone in any numbers as it would have driven the price down and created a very competitive missile.

A one sided relationship? Of course it is, and ever shall be!

Don’t tell that to Brit companies like BAE that make a fortune off the US military.

Those are US subsidiaries so pretty much US companies.

I fear that you have a point there, though equally I am sure in their testing of it they have taken great notice of that which makes Brimstone so capable. Indeed didn’t we read here a while back (it may have been a contributor mind) that the US is building similar capabilities into a future missile. They do like to control their inventory as deeply as possible which I think you see reflected in their dealings with the Israelis on weapon systems. Further if indeed Brimstone was a serious rival on the World market to Hellfire (and read the Gump… Read more »

It comes down to one very simple thing, military expenditure creates jobs and politicians will always want them jobs to be in their area as it will win votes. This is just much more impactful in the US where the expenditure is significantly more than in the UK. That combined with the backhanders/promises of board places and jobs that defense companies give to the politicians to help with their post political life.

US is already producing the JAGM duel mode missile that will eventually replace the Hellfire.

Brimstone? Same old story US always putting spokes in the wheels to delay non US weapon integration
Even if brimstone costs more, it is more advanced and it is money spent into UK economy!

US is exactly the only country that hasn’t bought Brimstone. AFAIK only a couple Arab countries have bought it for use with their Typhoons. So quit the hissy fit, not everything that comes out of the UK is marvelous.

At that price I’ll have half a dozen me self !

Hellfire comes in many variants, laser seaker, dual seeker, tandem warhead, FAE -type warhead but if you want a low collateral damage hellfire for taking out a Hilux you need the AGM-114R9X Hellfire . No warhead or explosives inside it except for the rocket motor. What It does have instead 6 x 50cm sword blades that pop out around the body of the missile just prior to it hitting. It is literally a surgical strike weapon made for decapitation of leadership targets. This was the missile that was used to take down the Iranian general a few months ago in… Read more »

Why not 400, we always seem to end up with odd numbers.

If we are offering 50 Apaches to NATO this makes sense.