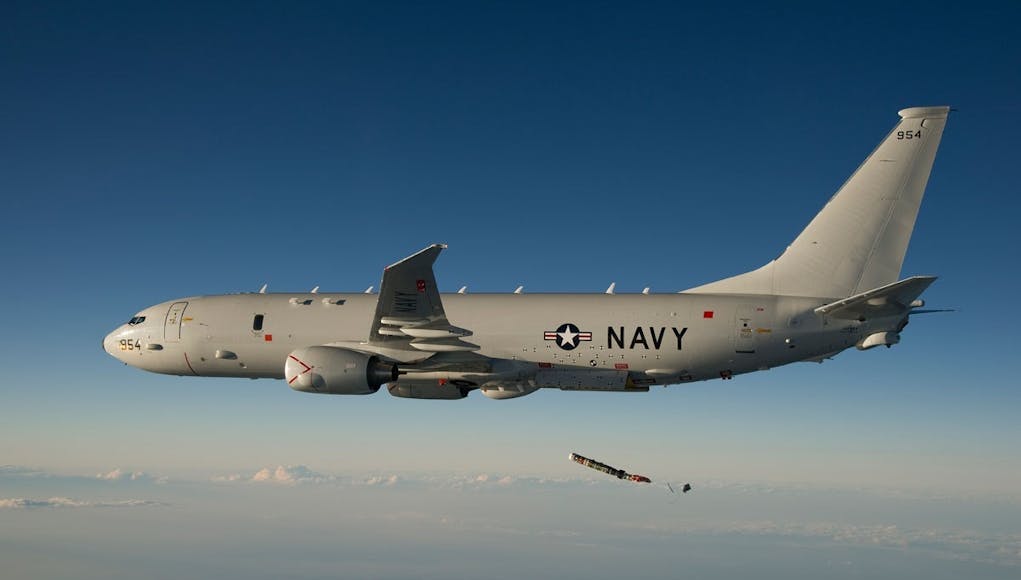 The Ministry of Defence have announced a £178 billion investment in defence equipment, including the purchase of 9 new Boeing P-8 maritime patrol aircraft.

The £178 billion investment in defence equipment over the next decade includes:

Further details of the investment will came as then Prime Minister David Cameron unveiled the Government’s five year National Security Strategy and Strategic Defence and Security review in the House of Commons.

According to the Ministry of Defence, the £12 billion uplift in funding will be focused on investments that will “help to ensure the UK can respond to diverse threats in an increasingly dangerous and uncertain world”. This will include:

But unfortunately it looks like the escort fleet will lose out again and if the rumour of decommissioning a T45 down to a fleet of 5 is true that’s pure madness.

Should have just finished building the nimrod ??

Get your head out of your wotsit – time to move on

Move on ? It was better

True . At least we are getting some sort of defence in place (at last)

Mark ….. It is time to move on…its been dead for 5 years…and as the former RAF officer who signed off its first flight all those years ago, I.might argue with you that it was not as good as you think it was. In reality the airframe in particular had some real issues that needed a shed load more money to get it safely into service even if tbe mission system was almost fully mature. In 2010 the extra cash needed was a bridge too far I’m afraid. .. now at least we are getting an aircraft which is as… Read more »

It was not better. Read up about the wings issue on how they didn’t fit due to every airframe being different. It was a farce ?

Just a few little problems they fitted in the end

Ok, Mark Bundred, what made the Nimrod better than the P-8?

Mark, David probably knows a bit more than you on this.

Yes i agree he seems to know alot about it im just wondering what his involvement was with the mra4 as from what I understand it was basically a brand new aircraft. Also i wasn’t trying to say we shouldn’t move on just that the mra4 would have been better ?

The MRA4 would have been formidable (in principle ) indeed…. By 2010 however, it had gone through so many development issues, with the mismatched airframe, engines and flight sytems (note I didnt say mission systems) that its was a very high risk project that would need a considerable amount of extra money to get it airworthy to modern standards. Like it or not that cash was not available at the time…. its easy to forgett how close the UK came to bankruptcy not so long ago!…., and lets not forget the procured number had dropped from 22 to 9 by… Read more »

Nimrods were hand-built. Each one was unique. It was very difficult to impossible to remove airframe parts from one and install them on another. ‘Nuff said.

It wasn’t as bad as you make out sam bits here and there didn’t fit but it’s nothing that couldn’t be fixed . Anyway im glad to see we have that capability back ?

Great news but wouldn’t a Kawasaki P-1 been better?

It has twice the engines, so yes it is way better.

Why is it that twice the engines = better?

I was being facetious
but it’s common for maritime search to take place at low altitude where bird strike is possible, belive the poseidon executes its mission at higher altitudes than Nimrod so not such an issue, or the yanks did not have a suitable of the shelf 4 engine airframe which to adapt, so it used it anyway. I have no expertise in the matter, I ran in the Internet however ( so it has to be correct) the P1 has a more modern Radar and a Magnetic anomaly detector which Possidon also lacks.

How is it ‘too late’ and why wouldn’t it have been better?

No it would not. This is a proven airframe. Good support

Fair enough, was just looking for a reasonable answer to why it wasn’t chosen

I saw the p1 at riat great aircraft I kinda wish we was getting that instead.

P1 was better suited to our needs. Forget the systems, they could be fitted to both airframes, but as an airframe itself, the P1 is better suited and designed.
But then, we wouldn’t want to offend our American overlords would we…?

This and more F35’s? Somebody in government is feeling generous.

Can’t wait to see how the public are going to pay for it though :L

They can go without and moan about the lack of or they can nut up and put up I suppose, ha.

Nimrod was a better aircraft ?

A raspberry for you I think

As a maritime patrol aircraft it was adequate for our national defence requirements. It’s continued use and development supported the British aviation industry.

Please read up about nimrod, especially the issue with the new wings on the MR4, ie: they didn’t fit! Nimrod is gone, a thing of the past, let’s move on and be thankful we will now have a modern MPA to patrol our shores ?

My point was not that it was a ‘better’ aircraft. Just that we should stop shopping out and look at the development of our own platform. The mistake with the Nimrod is the same as has always been the case with British defence equipment. ‘Making do’. My issue is with the decline in development of ‘British’ platforms

Those days are past. UK can’t afford to develop it’s own major projects any more. There’s a long history of UK developing ‘world beaters’ that end up with minimal export sales and such small production runs that the cost per plane becomes insane. UK has never successfully made a real military export winner (Hawk and Harrier sales weren’t bad, I suppose, but nothing on the scale of say, the F-4 or F-16). Civilian projects suffered from the same problem – Comet and Concorde both technically stunning but financial flops propped up by Government. When money is tight, the MoD has… Read more »

Nimrod was a work creation exercise for BAe much like the VC10 in the 90’s.

But you wrote that it WAS a better aircraft. Now you’re saying that it wasn’t? Make your mind up!

Well done Samuel for being pedantic. It was a better aircraft for the British defence industry, or did you not grasp the meaning of my last post?

In what way was Nimrod better, you ask – well, it was BRITISH for a start, with British parts. Should there (heaven forbid) be another major war, with Boeing aircraft, or any other ‘outside’ builder, we have to ship in spares to keep them flying. Boeing aircraft are designed for civilian use, and can’t take the wear and tear of heavy military activities.

737-800 spares are plentiful. Much more than Comet spares!

If I understand the previous discussions about this procurement, the P8 is going to have a lot of the more modern kit originally destined for the Nimrod, and BAE will have a role in not only the maintainance of our P8’s, but any bought by other European countries, and in addition, will be on the inside for new development on this airframe

The Nimrod was also originally designed for civilian use! It was called the Comet FFS.
An early 1950,s design.

The 737 800 (P8) isnt a 1980s plane, its essentially a brand new aircraft with 30 years of technical and safety innovations incorporated. Its an 80’s plane in name alone. Not a single part from the original jet would fit the new one. The Comet on the other hand actually was a tarted up 1950s jet. 🙂

Interesting to know whether they’ll adapt for UK torpedoes and sonobuoys, or whether we’re shifting to US stores (and kill off Stingray and UK sonobuoy capability).

Nah to both options??

The sonabouys question I think is debatable. … Stingray has just had a major investment. … so interesting for sure.

Maybe we’ll just pander even more to the Americans and buy their stuff again. (Whether it’s the best kit or not)

you mean we’re giving the aircraft to them…….

No, we’re paying for new ones whilst the production line is still hot.

No, they’re being purchased.

Just to be perfectly clear, so even Reno DeBortoli will understand: the U.K. will be buying the planes. But then what do you expect from an idiot who thinks that the Sandy Hook massacre was faked?

Reno debortoli the UK is one of the most powerful and richest country’s in the worlds you tool, and the US has never been able to conduct a war without the backing of Great Britain. And further more, aircraft carriers , radar , tanks , and all these fantastic inventions of war are all British inventions. Briton has never had hand outs if anything the US has been ripping off British technology for decades.

Andy Christie what ever, pull your head out of your ass…….you don’t know shit,

Samuel McAdorey your a real dumb ass, Sandy Hook didn’t happen research the facts and pull your head out of Andy’s Christies ass…… you all need to wake the fuck up……

RAF. All fixed-wing patrol aircraft belong to the RAF.

I suspect that the practical costs of running two air-forces (FAA and RAF) stopped being justifiable a while back. Just like F-35 and helicopters, these will be a joint asset.

Australia is also, replacing the Orion. It’s an old deal to be honest.

Will it be capable of carrying Stormshadow ? just a thought , the US version carries a similar weapon.

Hope they still commit to building the full compliment of Type 26 frigates. All accounts a total of 13 will get sanctioned after 2020 and the go ahead for 8 at the moment.

Any specs on the so called light frigates?

UK Defence Journal The PM did announce that, in place of the 5 x T26 frigates that now won’t be built, there would be other less capable General Purpose frigates built in lieu (presumably on Clyde Bank). Nevertheless this SDR is still a retrograde step for the RN because not only are they getting a reduced warfighting capabilty, because of these less capable vessels, but also because the increase in personnel to man the carriers was announced today as 400 total, when the combined ships companies should number 1360 basic (2 x 680 – not including those in training at… Read more »

Should have kept Nimrod!

A big raspberry to that suggestion

Nimrod was a modified 1950,s airliner.
The upgrade idea was a disaster.
Should have joined the US program in the first place.

Yes, Alan, and get a second-hand modified Boeing 707!

Not so much related to the p08 but it says will have 7 squadrons of 12 typhoons. That’s only 84 aircraft (of the top of my head, maths ain’t a strong point of mine). I thought we had over a hundred. Is 84 really a good enough number considering we remove tornado in 2019 and that about three squadrons, and it wouldn’t be intill 2023 or so that we have a reasonable f35 force. Meaning we will be short of aircraft for some four years.