The new Apache AH-64E attack helicopters operated by the British Army are to be armed with the Joint Air-to-Ground Missile (JAGM) and Hellfire, only Hellfire has been purchased so far with no date planned for a JAGM purchase.

In 2020, the first two of fifty new Apache AH-64E attack helicopters have been delivered to the British Army.

What’s the difference between the older Apache and the new AH-64E version?

According to a British Army news release:

What missiles are British Apache AH-64E helicopters supposed to have?

According to Jeremy Quin last year:

“The Joint Air-to-Ground Missile (JAGM) for the new AH-64E Future Attack Helicopter has been selected. This missile is designed for helicopter use and is already integrated within the aircraft, simulators and mission planning systems. In addition to JAGM, the Hellfire K1 and Hellfire Romeo missiles will also be fully qualified and integrated onto the aircraft.”

What do they have?

“To ask the Secretary of State for Defence, whether the purchase of the Joint Air-to-Ground Missile to furnish the UK’s newly-purchased AH-64Es was made as part of (a) the same agreement to buy the platform or (b) through a separate agreement.”

Jeremy Quin, Minister for Defence Procurement, responded by stating that the UK has not yet purchased missiles to be used in an operational setting:

“The Ministry of Defence has not yet committed to a stockpile purchase of Joint Air to Ground Missiles. Any future procurement will be through a new Foreign Military Sales mechanism with the US Government.”

I’ve said “operational setting” above because the UK previously purchased a small number to support trials according to a previous statement from Quin:

“The delivery date for the Joint Air-to-Ground Missile has not yet been determined. To date, a very small quantity of missiles have however been procured to support technical assessments and trials, to enable clearance of the weapon on the Apache AH-64E helicopter. I am withholding information about the cost paid for a single missile as its disclosure would prejudice commercial interests.”

It should be noted that while the UK has not purchased any JAGM missiles to be used operationally, it has however purchased Hellfire missiles.

“The Ministry of Defence has procured a number of Hellfire Missiles (of different variants) from the United States Government for the Apache Mk1 system and is now in the process of procuring additional missiles for the new Apache 64E platform. Some of the existing Hellfire missiles procured for the Mk1 variant are being cleared for use on the new helicopter. I unable to share the quantities, variants and costs of Hellfire missiles procured, as to do so could prejudice the capability, effectiveness and security of the Armed Forces.”

It’s likely that purchases will be made as the platform matures in British service.

Is it not possible to develop a black box adapter that makes a Brimstone look like a JAGM to the Apache?

I thought Brimstone was supposed to be our anti-tank/ attack missile? 1 type used on both fixed & rotary to reduce support requirement of not having multi types and to support British Industry. We need to either build/buy British and accept cost and get on with intergration to our aircraft/Helo’s or just buy the std US weapons and save the money. This we must build /keep British industry politcal BS, but then buying offshelf kit and neither putting our weapon on or buying US weapons is draining budgets/capability

I personally strongly agree with you, but it’s a measure to reduce cost and potentially risk in integrating Brimstone onto Apache.
The fact that the US is looking for a missile exactly like Brimstone to arm their own Apache (they’ve been trialling Israel’s Spike NLOS as a longer range man-in-the-loop missile recently), seems to have been missed.
Maybe the fact that we’ve not placed orders for JAGM yet means it’s in with a chance still…?

A little more info on the JAGM : 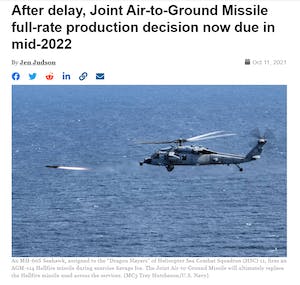 Why are we putting Hellfire on these and not Brimstone? Is this the US forcing us to buy US weapons as part of the purchase contract?

Money, money, money, or lack there of. Hellfire is less than half the price of brimstone. Brimstone niche is in fast air.

Hopefully the army go ahead with ordering a ground launched fire support version but if it costs a lot more than Spike ER and the new anti tank missile developed by France I can see that being shelved too as it won’t win exports.

As far as I’m aware, it’s our choice to avoid the integration costs rather than a US refusal. I think they were estimated at £70M by Nick Drummond, who’s a defence journalist- not sure how accurate that is though.

Almost certainly yes. They did the same with the original 64D contract. Notwithstanding the Hellfire missile is an excellent weapon.

Must be getting old , never heard of this missile .

I’m hoping that the US Army’s tests of Spike NLOS (They want a capability beyond Hellfire, for beyond line of sight engagements with man-in-the-loop targetting, which Brimstone incidentally also offers- but better) might have nudged the MOD into thinking that maybe it’s worth getting Brimstone onto our Apaches because the US wants a similar capability.
But I’m an eternal optimist, so this is unlikely to be the case.

The Israel lobby is rather more influential than the UK lobby sadly or is it simply that there is always enough influential anti UK protagonists politically to scupper British weapons chances for the most part. From what I read recently US intent to upgrade Hellfire to Brimstone’s full multi mode seeker capabilities has at this point been discontinued due to budgetary matters though doesn’t the Romeo version get close, my memory might be in brain fade there since researching it. Have also heard it claimed there though that Brimstone’s famed reduced collateral damage is mainly due to its smaller warhead… Read more »

You’re quite right, it’ll be tricky for us to compete with an Israeli product- even with a superior option. I’m not an expert either, but I believe the biggest advantage Brimstone has over Hellfire Romeo is more in range and the targetting, rather than the seeker. I think the seeker would be called fit for purpose, same as the warhead. But Brimstone 3 has significantly longer range- over the horizon from a rotary wing platform, and the 2-way data link to allow offboard targetting and all that kind of stuff. My understanding is that Romeo lacks those elements, and that’s… Read more »

Ah just checked and I see the JAGM is the latest proposed upgrade/replacement of Hellfire I was cross remembering it with the previously cancelled project that in combination I refer to above. The JAGM has indeed lost the planned trimode seeker that budget has so far precluded. So I am presuming that this missile is the final result of the program to produce a new missile to do the job that Brimstone was originally proposed for by MBDA back in the day, but the US decided to produce instead, while utilising an interim solution ( I presume Romeo) in the… Read more »

50 as opposed to 67 before has resulted in 2 AAC squadrons dropped.

If Hellfire/JAGM work and blow **** up effectively, I’m fine with them. Hellfire has been in service a while already. Integration costs always seem ridiculous to me?

Spot on D- 50 is too soft. Gone are the days of RAF close air support.
The army will have to look to it’s own.

I love the Apache but I can’t help thinking that in a real full on shooting match, aren’t they incredibly vulnerable to cheap man-pad missiles? For something so expensive and for which we have so few available, aren’t they more a liability (for not wanting to loose them) than a help?

Again, I think they are an amazing bit of kit but…………

It’s all to do with crypto codes. However it’s more probable that we will end up equipping Apache with what ever the US decides so that there is commonality between the fleets and reduces costs. If we end up in another conflict with our American cousins we can always borrow thier stocks because we never seem to store enough and enverabley run out.

Surely the UK government/MOD could form a special detachment, who’s sole purpose is to research and integrate weapons systems that will fit on any platforms necessary? Always amazes me that other nations such as Israel and Australia can purchase any off the shelf systems at ease.

Good it was a dumb idea – go for Brimstone

Slight aside, but the Apache fleet should be doubled, not only is it relatively cheap but it is heavily used in every force it is part of.

it really is worth stumping up the additional £1bn for 50 more of these assets if we can possibly afford it.

Understood, but at some point we have to break the cycle and start getting the right amount of kit in the door, especially when the pricing is so good. I would rather have 50 more of these than spend the money on CR2 upgrades at this point in time for instance (and actually this decision should have been taken 3 years ago). We do seem to spend an awful lot of money on equipment and not necessarily get good value for it. I am one of those who think we should be more of an expeditionary force and let the… Read more »

Hi Pacman -it’s a compelling case that you put forward
I can but only agree with your logic.

Your logic is spot on but the Government has just spent the money on free Covid test kits. Perhaps an unfair link but it illustrates the point of where the priorities lie at national level and it ain’t defence.

So basically maybe we will, maybe we won’t. Brimstone too expensive for just now. We spend all the money on broken armoured vehicles 😂
I wonder how many hellfire the uk holds and what variants. If the hellfire and rockets and cannon can do the main job just now that will be ok. When we have the 50 apaches and crews to operate them then we may see more weapons integrated. If they are needed

Call me crazy, but instead of buying JAGM, use that money to integrate Brimstone. You already have Brimstone in inventory so you don’t necessarily need to order additional specifically for the Apache. Also why have inventory of additional missile type that basically do the same thing.

Maybe the delay in procuring the JAGM is a bit of a subterfuge to get Brimstone on the Apache?

Brimstone isn’t just the missile. It’s missile component is based on the hellfire airframe. But the Brimstine system is also the quite complex “pylon” that enables it to work from fast jets. And of course the different electronic architecture. Converting this system for Apache would be needless work, for what opertional advantage?