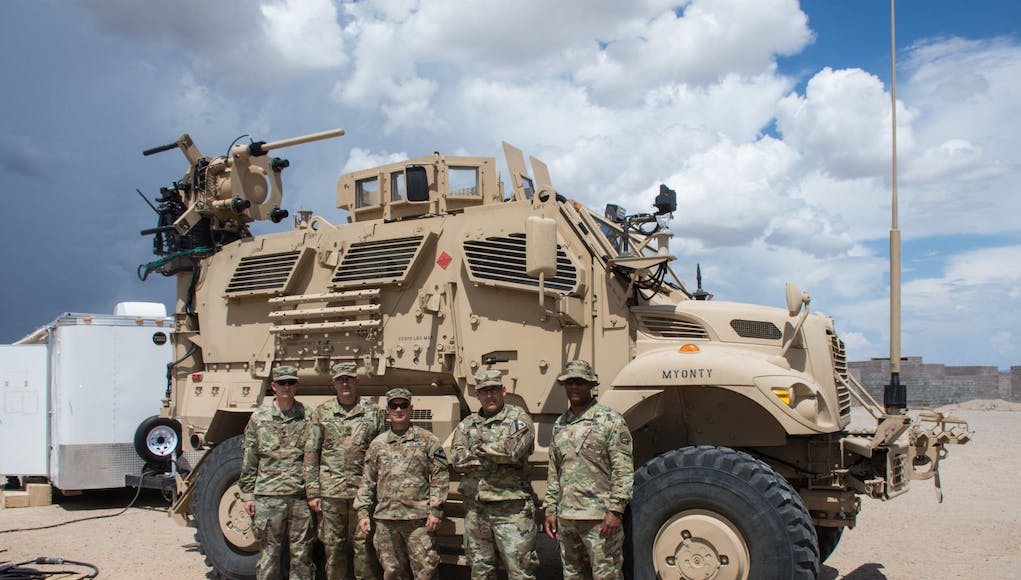 The new vehicle, say the Army, was developed to provide Army Electronic Warfare Teams with the ability to sense and jam enemy communications and networks from an operationally relevant range at the brigade combat team level.

“This effort will allow the ability for EW Soldiers to influence future vehicle improvements and grow their knowledge,” Lt. Col. Scott Schumacher, chief of the Rapid Equipping Force solutions team, said in a release.

“This is an advanced EW technology that can provide the Army new offensive and defensive capabilities.”

The Greywolf team reportedly attended two weeks of training on the vehicle in Yuma, Arizona. The electronic warfare kit is installed on a four-wheel drive MaxxPro Dash, one of the multiple types of MRAP (Mine-Resistant Ambush-Protected) armoured vehicles.

“It has never been used at the brigade-level, so we have to really put it through its paces and see what its capabilities and limitations are,” said Chief Warrant Officer 2 Alexander Torres, the brigade’s electronic warfare technician.

“We have to develop best-practices and TTPs (Tactics, Techniques and Procedures) that will help future units as well as continue the development of a dedicated EW platform.”

Since the inception of EW at the BCT-level there hasn’t been the capability for electronic jamming. The system is highly programmable, which allows the EW team to develop a programme targeting the frequencies the enemy is attacking the BCT with.

“This is a huge benefit because now we have it on our time instead of relying on our sister services to provide us with jamming capabilities and hoping it is available when we need it,” Torres said.

The EWTV was developed as part of the Army’s Rapid Equipment Fielding, which identifies gaps that need to be filled that cannot wait on the traditional contracting route.

This type of development was inevitable and will only become more sophisticated as time goes on. Combating such systems will ensure endless employment for those involved in the business. ‘Can not hide can, not run’ is quickly becoming the inexorable march to total visibility and nullification on the battlefield.

I wonder if the US will trial this in Syria to aid ISIS and Al-Qaeda by interfering with the Syrian Army’s communications during their Idlib offensive.

What the flying f*** are you talking about? America has dropped more ordnance and deployed more forces against Isis and Al Qaeda than any of it’s allies could dream of doing. Stop your infantile conspiracy theories, if the US truly wanted an end to Assad and his regin he would be dead within the week. The argument that the US would be stopped by Russia in Syria is imbecilic. For one the US has never been stopped by another countries disapproval not even the Soviet Union’s when they disapproved of actions during the Cold War. Second are you really so… Read more »

Steven the troll. The nato forces have bombed isis every night they have done more than anybody to defeat isis . Basically russia have done nothing but help a evil Syrian leader