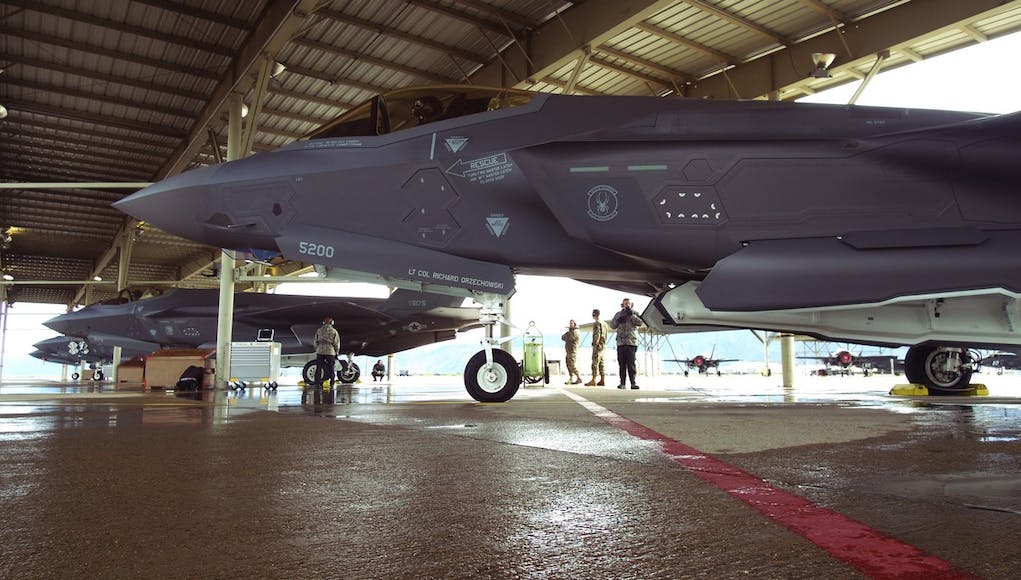 The US Air Force has deployed one squadron of F-35 Lightning jets to Aviano Air Base, Italy.

The F-35A aircraft are from the 388th and 419th Fighter Wings, based at Hill AFB, Utah, and according to the US Air Force they have been deployed to participate in exercises and conduct training with other Europe-based aircraft as part of a ‘Theater Security Package’.

“Funded through the European Deterrence Initiative, the TSP provides a more robust U.S. military rotational presence in the European theater capable of deterring adversaries and assuring partners and allies of U.S. commitment to regional security. The F-35s and members of the 421st and 466th Fighter Squadrons arrived at Aviano AB, May 24 and will remain in Europe for several weeks.

The 388th FW is the Air Force’s first combat-coded, or operational, F-35A unit. This is their second deployment to Europe. The first was the 34th Fighter Squadron deployment to RAF Lakenheath, England, in April 2017. The 421st FS is the newest F-35A squadron and this is their first deployment with the multi-role stealth fighter.”

“As the final 388th Fighter Wing squadron to transition to the F-35A, we’ve been able to leverage the experience of the 4th FS and 34th FS and take the squadron on the road just six months after getting our first jets. We are really looking forward to continuing the cohesion built with our allies and partners. It is a real privilege to get the seasoning, training and life experiences for our 388th and 419th FW Airmen.”

Does Europe really need Americas millitary everywhere? Europe used to have a couple superpowers! And we have enough jets, I jst can’t understand why America spends so much money deploying assets all over Europe when we are pretty well protected, Europe alone is a dam superpower.

Surely, only in part? Thank goodness America is so active in deploying their forces to Europe. Historically, they have the right to ensure our and their security, and rightly so. I find difficulty in visualising a cohesive EU counteraction against an aggressor and, yes, I could be doing them a disservice by saying that? One thing is clear, whilst the conglomerate of countries decide how to react the Americans will be in action, and hopefully, stemming the tide of any offensive activity?

The rules changed after WW2 when the Americans recognised they needed bases in Europe to deter the Russians from invasion. As for being late, they may have prevaricated at the outset of each war, but gave thousands of their young people to the fight. I recommend you visit an American war grave cemetery, it’s very sobering.

LOL. Germany, the leader of the EU entire military is basically either grounded or tied up at port awaiting maintenance, trained personal, ect. All the other EU countries besides G.B. and France have very small militaries with very limited capabilities. If Russia decided to attack the EU there is very little if anything those countries could do without the help of US forces. They have all been and continue to depend of the generosity of the American taxpayer to defend them. I don’t see this ever changing.

Putin’s bit by bit strategy is to restore the Von Ribbontrop Pact… won on the back of German snowflake 19year olds busy trending whats on Russia Today bulletins.

The cynic in me says they have left Hill to avoid the tornadoes currently seeping the mid-west. Europe is a long way to evacuate to though

Yes. and Europe Is pretty much an Open Door to Russia. Europe has next to Bugger All Defence Truth Be Known.

This is a joke… isn’t it? Seriously?

@Cam – I have some sympathy with your asking that question and to add some context one can mention that after the UK leaves the EU 80% of all NATO assets will come from OUTSIDE the EU (if not Europe). Which then leads to the other question if I was American which is “Why should we bother if the Europeans can’t be bothered to defend themselves?” However as to your question I think there is one simple answer. The USA projects power and influence by one means and one means only – Military power (or threats of use of or… Read more »

@Chris H – to take the American side, I would say they recognise the nature of the geopolitical situation as a cultural war. The world is being fought over by a few socio-cultural blocs on multiple fronts; politically, economically, and of course militarily. There’s the Chinese who seek to entrench the power of the Politburo over the country for centuries to come, and that can only be done by extending its power regionally and across the world. I don’t know what the Russian oligarchs want besides profit and a return to the glory days of “Velikaya Rus”, and they cling… Read more »

The USA is an integral part of NATO. It provides substantial financial support as well as weapons systems and their technical support. Should the USA exit NATO, the result would be catastrophic for the EU. European leaders know this.

Any one know f35 numbers or political reasons for deployment? I’d guess around 24 planes, can only speculate on reasons. A way of saying thankyou to f35 partners by deploying some planes in their countries? (Pretty limp thankyou if that’s the case) USA showing off their military capabilities? i.e. we have enough operational f35s that we can forward deploy some to other countries (albeit for only a few weeks).

Chances are this is linked to the Iranian perceived threat. Moving the planes to Europe, is a good way to get them closer to the region, should they need to be forward deployed further, without Congress needing to be involved/ intervening.

Same.reason as the massive arms sale to Saudi

Kinda feels like we have been through this before in the 60s/90s and it didn’t end well.

RAF practising onward deployment of a new asset. Obvious place to stage them from.

If all this is for Iran why are these allied aircraft not in Al Udaid, or Oman, or elsewhere in the Gulf where there are plenty of airfields?

Too obvious. If Trump wanted to move a load of assets into the middle East,.it would spark a huge debate in Congress and would also be seen as an act of agression by Iran and it’s allies. The aircraft carrier in the region caused enough problems on its own.

Oh yeah way too obvious to send a handful of
F-35s, the Iranians will know for sure that something is up.

Better to use more covert means like deploying B-52s and a carrier strike group, that way you don’t arouse suspicion

Yes I think so too.

But the arms sale to Saudi/UAE is more likely related to the Yemen war, just conveniently parked under “Iranian emergency” to cut through Congress.