The focus of the multinational exercise, Astral Knight 2019, was to defend several key areas of terrain from cruise-missile and aircraft strikes.

During the exercise, U.S. military forces worked closely with coalition forces from Croatia, Italy and Slovenia at various locations across Europe, carrying out operational and cyber scenarios.

From June the 3rd-6th, the 421st Fighter Squadron flew eight sorties per day and met all of their frontline requirements, say the US Air Force in a release.

“It’s hard to appreciate the challenges if you’ve never been in an exercise like this before. We’re bridging commands, services, countries and continents,” said Lt. Col. Richard Orzechowski, 421st Fighter Squadron commander.

“We have some really smart, dedicated problem-solvers who helped us overcome the early hurdles that are going to be present at the start of any conflict or large, integrated exercise.”

Strategists say that integration, a key theme of exercise Astral Knight, will be essential in any future war and one of the main technological design features of the F-35A is interoperability.

“It’s truly rewarding to see that we can leverage all the capabilities of the F-35A, which we have all been working toward,” said Lt. Col. Brad Klemesrud, 419th Operations Group deputy commander.

“In an exercise this large and complex, you get the opportunity to see how theory meets reality and put into practice what’s only been on paper.”

For the first time, U.S. Air Force F-35As integrated operationally with Italian Air Force F-35As and communicated with each other over the Multifunction Advanced Data Link, a system unique to the platform.

Great, are these the UK based F35As?

The US are steadily ramping up the pressure, to try and stop Turkey going through with the S400 deal. I wonder how much the F35’s component sub-contracting is worth?

Turkey has done very little over the past 20 years for NATO or the US. The US pays Turkey a small fortune to use their bases. We should remove our nukes from Turkish soil immediately and cut back our presence there. They are all buddy, buddy with fellow dictator Putin so let them defend themselves!

Was not aware any were kept there, thought they were all at Lakenheath or in Germany.

A budget justification and approval (J&A) document released in February 2018, however, shows it to be related to the carriage of the B61-12 nuclear weapon on the F-35A for the US Air Force (USAF) and international customers. The F-35A will carry up to two such weapons in its internal bays.”

So a fighter bomber that the enemy cannot see and which can drop 2 stand off nuclear bombs? Useful. This alone should be worth the cost of the F35 programme. I seems to me that it would be handy to have something like that in F35s of our bomb bays. 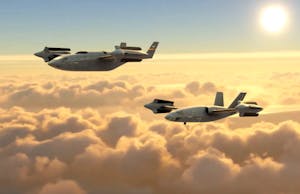 August 4, 2021
Bell have unveiled design concepts for aircraft that use the firms 'High-Speed Vertical Take-Off and Landing' technology.