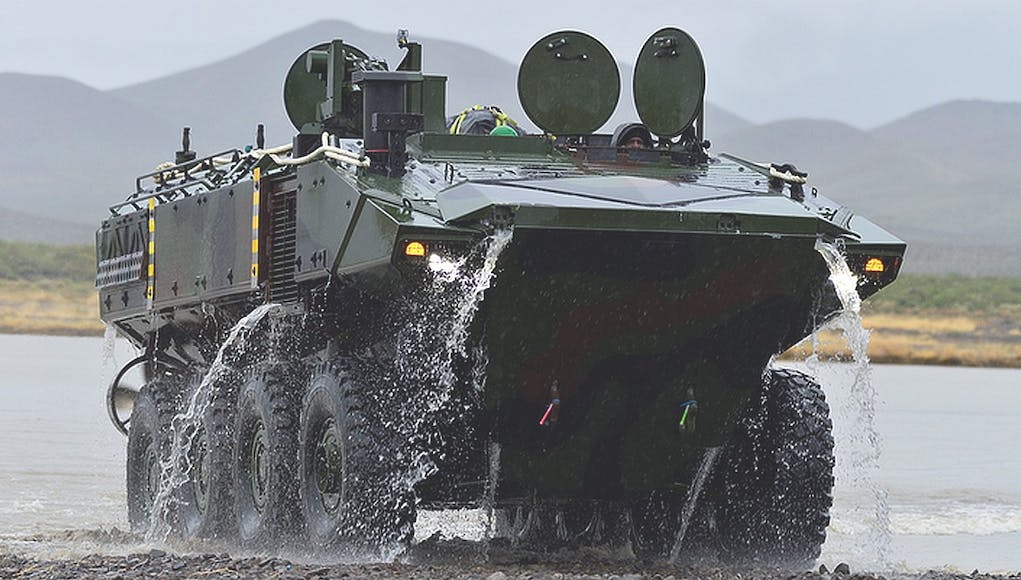 Share
Facebook
Twitter
Pinterest
WhatsApp
Email
BAE Systems, along with teammate Iveco Defence Vehicles, has been awarded a $67 million contract modification by the U.S. Marine Corps to develop new variants for the Amphibious Combat Vehicle (ACV) Family of Vehicles programme.
“The ACV has proven to be a versatile platform capable of numerous configurations to meet current and future mission requirements,” said John Swift, director of amphibious programs at BAE Systems.
“With this award, BAE Systems will be able to develop a family of vehicles that will deliver the technology and capability the Marines require to accomplish their mission in support of our national security.”
The contract calls for the design and development of the command (ACV-C) and the 30mm medium caliber cannon (ACV-30) variants.
The firm say that the ACV-C incorporates seven work stations to provide situational awareness and control of the battle space.
“The ACV-30 integrates a 30mm cannon to provide the lethality and protection the Marines need while leaving ample room for troop capacity and payload.”
BAE Systems was previously awarded a low-rate initial production contract in June 2018 for the personnel variant (ACV-P).
The US Marine Corps announced the ACV had successfully completed anticipated requirements testing and would no longer be pursuing an envisioned incremental ACV 1.1 and ACV 1.2 development approach.
The programme is now known as the ACV Family of Vehicles, which encompasses the breadth and depth of the vehicle’s capabilities and multiple variants.
0 0 vote
Article Rating

Has there been any updates on when Boxer will be delivered to the UK?

Was the order actually placed yet? Last I read it was still at intention to by phase?

Don’t think so. Rumour was order was going to be bigger than thought.

Strange how the trend of wheeled APC’s in the British Army in the post-war years gave way to tracked (FV432/Scorpion) and today, it’s come full circle for a preference of wheels once more?

I know this is probably the US BAE company winning the AVC programme, yet it’s still profitable for UK Treasury?

Wheeled vehicles are much cheaper to maintain and easier to airlift to places like Iraq or Afghanistan, environments which are perfectly suited to these IFV/APC. If an IED kills a track you are stuck and it can be dodgy to get out of the vehicule to repair the track, whereas in a wheeed vehicle you can still limp back home with 6 of 8 wheels. With CAS (cluster bombs, etc..) you are less likely to see big armored columns deployed which can make the terrain really muddy, in which case the track is better. So unless you plan to invade… Read more »

Absolutely right, and with run-flat technology it makes eminent sense to use wheels. In Adan, a number of Saladin and Sarisan’s got home on four wheels after being hit by rebels!

Do the Royal Marines operate in such different ways and environments to the USMC that they don’t need a wheeled amphibious vehicle?

I think it’s more a case of lack of money.

Glass Half Full
Reply to  Bloke down the pub

Probably different philosophy/primary environment. The RM have ~100 tracked BvS10 Vikings which, while slower on paved road and in the water than the ACV in the article, are likely to be much more flexible in use, particularly off road/in snow for use in Norway for example.

Elliott
Reply to  Glass Half Full

Royal Marines natural habitat is Norway.
The USMC’s is the islands and peninsulas of the Pacific.

Elliott, I scratched my head on your response. It sounded more like something out of WW2. Royal Marines, as far as I know, also train in Belize, Brunei, parts of Africa and the Middle East. Some of the islands and Peninsulas of the Pacific can be much like Norway. The Japanese islands, the Korean Peninsula and the Kamchatka Peninsula come to mind. As far as I know, the USMC has had training in Norway as well. The “Natural Habitat” of both these elite forces is anywhere they are sent to. That’s why both train in as many different climates, terrains… Read more »

Whether a force is dispatched all over the world has little to do with what it’s primary function and where it primarily trains and plans to fight. The USMC has since the end of the Civil War mostly acted as QRF and as the way the for the USN to project power in the Pacific. Hence there procurement choices and emphasis on training for amphibious and helicopter assault. Since the of WWII the RM has mostly been tasked with a primary mission in the event of war with Russia securing Norway. Hence the ordering Viking APCs. On international training? That… Read more »

Does the Boxer have an amphibious capability?

No it can’t swim so if no bridging available it will get stopped at the first river it comes to.The strike brigade best avoid them?

True but neither do the big heavy tanks which boxers are supposed to support in a “classic” war.
There are mobile bridges and landing crafts, so not sure the ability to turtle at 8mph in calm waters is worth the added costs considering it is hardly ever used.
The pentagon can afford to spend what it wants, but the MOD doesn’t have that luxury. Unfortunately, when you have finite budgets, choices must be made.

The Boxers are intended for the strike brigades whose philosophy is to rapidly deploy in small dispersed groups,considering all the water obstacles across Europe they will quickly get stuck.

Europe is not that big of an issue for that due to the sheer number of crossings, bridges, and narrows where temporary bridges could be thrown up.
Now if the Strike Brigades are somehow caught flat footed and take to much time to deploy? Then the bridges would have had time to be blown by combat engineers or damaged by artillery and aircraft.
But anyone who thinks a contested crossing of a river, like say the Dnieper is going to be easy (no matter the equipment on hand) are high as a kite.