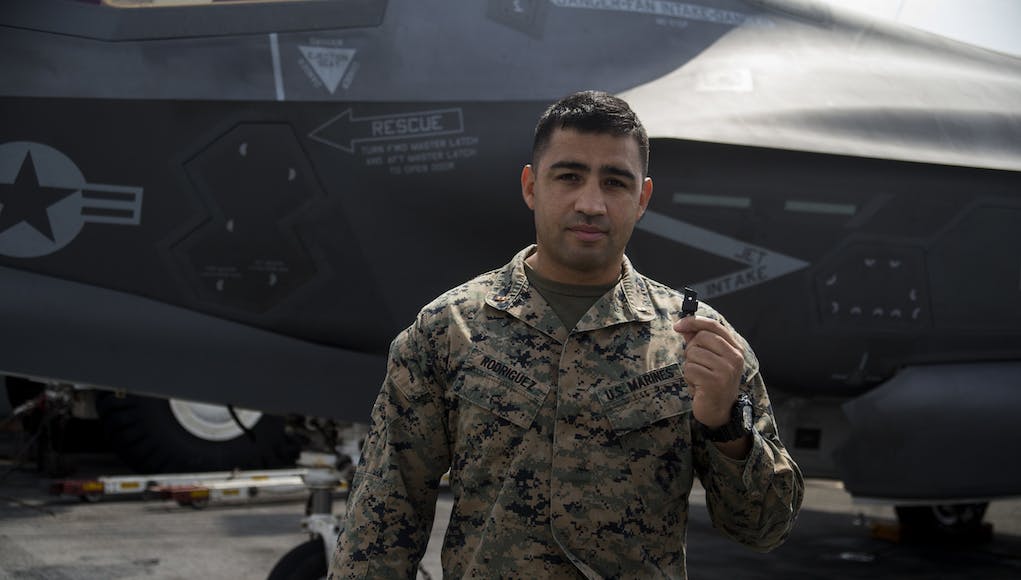 Sgt. Adrian Willis, a computer and telephone technician, was thrilled to be selected by his command to work with a 3-D printer according to a release:

“I think 3-D printing is definitely the future – it’s absolutely the direction the Marine Corps needs to be going. Finding innovative solutions to complex problems really does harken back to our core principles as Marines. I’m proud to be a part of a new program that could be a game-changer for the Marine Corps.”

CLB-31 uses its 3-D printer as an alternative, temporary source for parts. The purpose is to assist US Marines with mission accomplishment in the face of hardship, such as mechanical parts failing.

As a permanently forward-deployed unit, it can be both crucial and difficult for the 31st MEU to get the replacement parts it needs for sustained operations. Proving this concept, Marine Fighter Attack Squadron 121 successfully flew an F-35B Lightning II with a part that was supplied by CLB-31’s 3-D printer.

“A VMFA-121 F-35B had a plastic bumper on a landing gear door wear out during the MEU’s Spring Patrol 2018. Though a small and simple part, the only conventional means of replacing the bumper was to order the entire door assembly – a process that is both time consuming and expensive. Utilising a newly released process from Naval Air Systems Command for 3-D printed parts, the squadron was able to have the bumper printed, approved for use and flown within a matter of days – much faster than waiting for a replacement part to arrive from the United States.”

This is becoming increasingly common in military aviation, a few years ago a British Tornado aircraft was equipped with a 3D printed protective cover for the cockpit radio, a protective guard for the landing gear and support struts on an air intake door.

Mike Murray, Head of Airframe Integration at BAE Systems, announcing the successful test flight at Warton said at the time:

“You are suddenly not fixed in terms of where you have to manufacture these things, you can manufacture the products and whatever base you want, providing you can get a machine there, which means you can also start to support other platforms such as ships and aircraft carriers. And if it’s feasible to get machines out on the front line, it also gives improved capability where we wouldn’t traditionally have any manufacturing support.”

BAE said some of the parts cost less than £100 to manufacture and had the potential to save hundreds of thousands of pounds every year.

Did someone thing ahead? HMS Queen Elizabeth has 3 d printers aboard.

Can’t have forward thinking! Whatever next? Seriously though, something I didn’t know and welcome news…

[…] year, we reported that US Marines with Combat Logistic Battalion 31, 31st Marine Expeditionary Unit, are now capable of […]