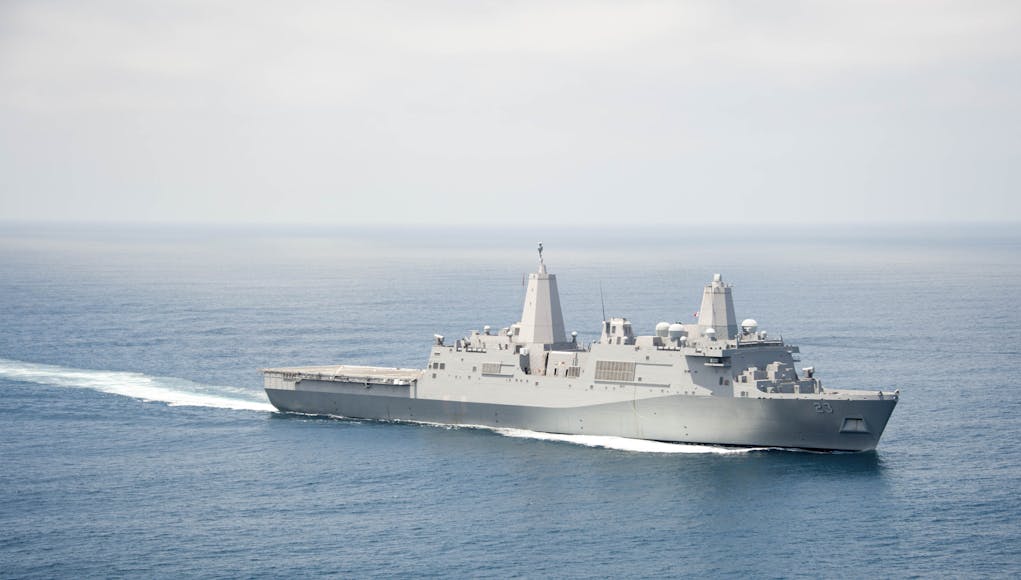 BAE Systems has received a $41.8 million contract from the U.S. Navy to perform routine maintenance and modernisation of the amphibious transport dock ship USS Anchorage.

The Anchorage will undergo 12 months of restorative work at BAE Systems’ shipyard in San Diego. The contract includes options that, if exercised, would bring the cumulative value to $48.4 million.
“Our team looks forward to working with the Navy and our repair partners to perform important upgrades that ensure the Anchorage remains a very capable amphibious combatant ship,” said David M. Thomas, Jr., vice president and general manager of BAE Systems San Diego Ship Repair.
With approximately 1,300 shipyard employees in San Diego, BAE Systems will begin working aboard the 684-foot-long San Antonio-class ship in July 2019.
Under the contract, BAE Systems will support the installation of upgraded electronic systems and perform other shipboard improvements.
USS Anchorage was commissioned in May 2013 and is named after the Alaskan city. BAE Systems’ work aboard the nearly six-year-old ship is expected to be completed in July 2020.

These Ships look Unfinished, They really need Spiky Whirly Balls on top like our T45’s.

interesting looking ship, with missile system on the ‘pointy end’ maybe worth the same on a bay, or albion class ship?

The USN had severe problems with these ships on their introduction to service.

The program has cleaned up, all new designs have problems, even the T-45 has had its issues, forget that ? here is another article… news.usni.org/2016/01/11/a-decade-of-san-antonio

I haven’t forgotten the T45 problems – I was just commenting on the initial problems.

The only ships that had issues were the ones built at Avondale which had underbid to get the contract then cut corners (as usual for Louisiana). All the ships that were built Pascagoula arrived in working order and for roughly the price HII said it would (expensive but at least they were up front about the costs).

reliability? bad workmanship? were they built on the clyde?

Indeed HF, just like the new Carriers , Littoral Combat Ships and the Zumwalt class. Actually the Zumwalt problems are so bad, they managed to build them Upside Down.

It’s not going smoothly at all and there are many other Issues including Facilities and Skills.

Or measure once, cut once … and then bang it into place with a big hammer when it doesn’t quite fit.

I was sent for Left handed screwdriver and sky hooks when an apprentice… I got my own back with new apprentices years later, it’s a right of passage thing…

So it seems the Americans and Germans can’t build ships so all we need is the Italians and the French to join them and we can reconquer the naval shipbuilding world. Oh well one can dream I guess but considering others problems we do sometimes give our guys a bit of a hard time.

The reporter would probably not been as calm if he knew that Soviet ground forces had ‘tactical’ nuclear weapons and were authorised to use them without further permission if the USA invaded, and that a Russian sub came very close to using a 10kt torpedo on a USN carrier !

10 kiloton yield, for anyone who didn’t realise what that meant.

i was sent for a bucket of steam