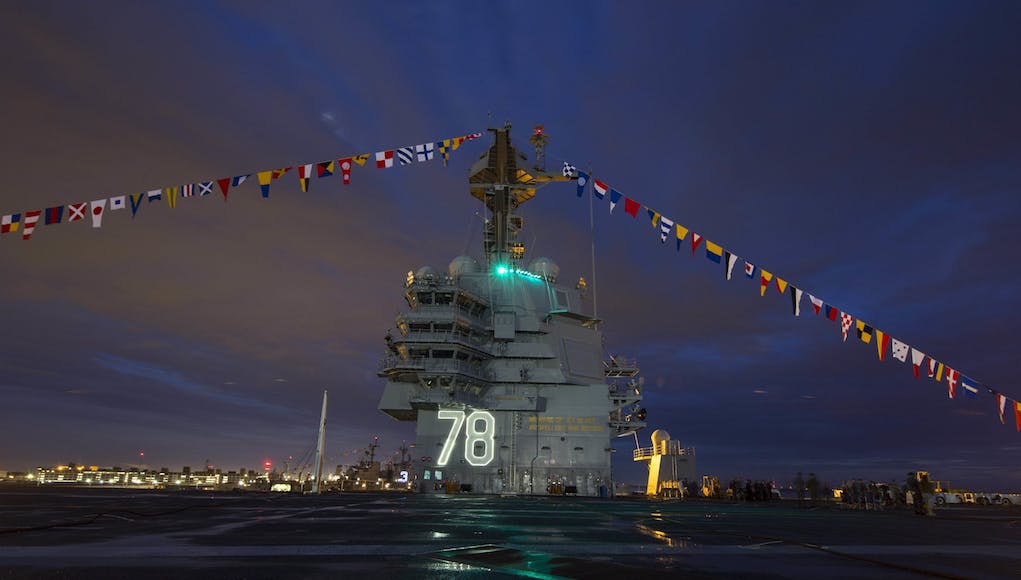 The US Navy will commission its newest aircraft carrier, the USS Gerald R. Ford, during ceremony on Saturday.

The ceremony can be viewed on the Navy Live blog at http://navylive.dodlive.mil 3pm UK time.

USS Gerald R. Ford is the lead ship of the new Gerald R. Ford class of aircraft carrier, the first new class in more than 40 years and will begin the phased replacement of Nimitz class carriers when the ship is commissioned.

The US Navy say:

“CVN 78 honors the 38th president of the United States and pays tribute to his lifetime of service in the Navy, in the U.S. government and to the nation. During World War II, Ford attained the rank of lieutenant commander in the Navy, serving on the light carrier USS Monterey (CVL 26).

Released from active duty in February 1946, Ford remained in the Naval Reserve until 1963. Ford was elected to the U.S. House of Representatives in 1948, where he served until President Nixon tapped him to become Vice President in 1973. Ford became president in the aftermath of the Watergate scandal and served in the country’s highest office from 1974-1977.”

“The nation’s going to be very proud of USS Gerald R. Ford,” said Chief of Naval Operations Adm. John Richardson. “I am incredibly thankful for the shipyard workers and Sailors who worked amazingly hard to bring this mighty ship to life. This Saturday will be a huge day for our Navy and our nation. The new technology and warfighting capabilities that Ford brings will transform naval warfare, making us a more lethal Navy. The increased combat power will enable new ways to combine information, ships, aircraft and undersea forces, changing how we operate and fight.”

In July 2016, a memo was obtained by CNN from Michael Gilmore, the US Department of Defense’s Director of Operational Testing and Evaluation indicating that problems with four major flight systems would further delay combat readiness of the ship. The ship was originally expected to be delivered in November 2016 and these issues were suggested as the cause of the delay. 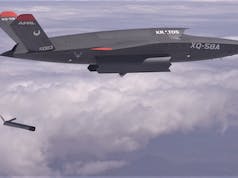 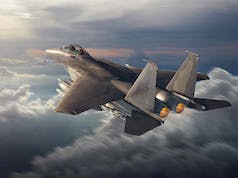 This ship did barely 4 days around Norfolk on ‘sea trials’ at low speed. Congress has been told it is actually unfit for combat. EMALS and AAG still do not work as planned. But given the £16 Bn it cost (and counting) I think this is just an act of bravado because failure to deliver (even if it doesn’t work) is just not an option for any United States Government. We avoided EMALS and AAG for the very good reasons it was all too soon, unproven and uncosted. We have also avoided nuclear powered surface ships. Again for the very… Read more »

“world beater”…in the QE?
I don’t think so.
“…still operate similar aircraft to the Ford”
The Ford can operate the F35B and and a host of other aircraft that are inoperable on the QE. They’re really not comparable.
“And for all the technology the Ford apparently has it still needs 4,500 crew to operate.”
Yeah, it’s a CVN. Look, the USN can man their ships with thousands because they have the manpower and funds to do so.

The Ford needs 4,500 crew because it can (a) carry up to 90 aircraft which require more crew to service and operate and (b) nuclear power requires more people to man, but the payoff being the ship doesn’t have to refuel for 15-20 years.

EMALS and AAG are new technologies and will have their bugs worked out before installation on the next ship, the Kennedy. In fact, they have already launched and landed a Super Hornet 2 days ago, so the systems do work. Secondly, the US Navy would not have used nuclear power for the last 55 years if there were no strategic benefit – indeed, these ships can go 15-20 years before they need to be refueled. How far can the QE go before it has to run back and fill up its tanks? I understand your desire to prop up the… Read more »

I agree with you but would have liked to have seen a dock in it as well – our version of the Wasp class if you like. Then it becomes a real world beater (I am nit picking a bit here)

all the same they are very very good assets and I am sure the US will look at this design with a view to using some of the elements in the next version of the America class.

I have to disagree with you there Pacman27. In my opinion for the RN that would have been 100% the wrong way to go. We can’t afford multiple types of carriers like the USA can. Our carriers were designed as strike carriers, expecting them to launch landing craft puts these hugely expensive and unique assets too close into shore. Sadly even without having a well dock the MoD is multi-tasking the carriers, PoW initially, for amphibious assault to make up for Ocean going which opens up the same can of worms but it would have made things much worse if… Read more »

On a slightly different note

Could the Design of the QEC class have been improved if the island were placed in the centre and a runway placed either side (2 ski jumps). with lifts at the rear (to flight deck) and in front of the first centre Island (from flight deck) and a further lift in-between the islands for munitions

I just wonder if this would be the optimal layout bringing aircraft up aft ready to launch and returning them to the hanger fore with an armoured core lift for munitions to hanger and deck.

I read quite a few comments on an American defence site talking about the QE class and asking why they didn’t build their carriers at that size. Their defence spending is ludicrous given their deficit and national debt so I can see them looking at this design in order to maintain hull numbers in the future.

Just wish it had Sea Ceptor or even Sea Viper!

Rob – I have noted some questioning as well and a guy called Tyler Rogoway at ‘foxtrotalpha’ writes some interesting critiques:

This is especially interesting:

Pacman27, I have a few questions for you: You put the two islands in the middle….The aft one is FLYCO, how the traffic control will see the planes on the two ramps if there is the command island in front??? How the FLYCO will see the approaching jet lets say coming to land on a Starboard side? You cannot make FLYCO rounded like airport control tower. The exhaust and intake systems and pipes are running trough the island from 9 deck. The Aircraft lifts to the hanger deck….two of them, where you gonna put them???? On the middle of a… Read more »

Good points but these can be addressed by cameras (London City Airport has just gone remote using cameras only).

Does anyone know if the QEC can launch 2 planes at once?

No they cannot. I worked on her for the last 5 years so let me assured you that this is impossible, one plane at the time. Regarding cameras….there are almost 80 cameras already around the perimeter of the ship, perhaps 20 more around the islands, however they serve different purpose. As I’ve said above it will be impossible for the FLYCO to be positioned in a way that they can monitor everything. One of the main issues is safety of the flight deck crew. Handlers, Leads, Shooters etc. The personnel involving with retrieving and launching aircraft’s is huge. In London… Read more »

I think in time the USS Gerald R. Ford will be a world beater! Our carriers are very limited by not switching to the F 35C. The US is leading the way in sea launched drone aircraft. Unfortunately we have missed the boat in reduced expenditure via commonality in the future. Our carriers are mainly inter-operable with the USMC, when ideally the F 35C would have the stand off distance to keep the fleet out of warms way if operating independently. The C model has the range, payload and loiter period to fulfil all the mission sets. Crowsnest is not… Read more »

Gary – Even when I see the Ford launching F-35Cs on a regular basis I still won’t agree with you. The costs are just unreasonable in themselves and unjustifiable for the UK even though the QE generates enough electric power for them. Given we could build 3 QE for the cost of the Ford (and incidentally use the same number of crew) you have to seriously ask why EMALS / AAG and all of whatever ran up the bills for the Ford? I wonder if they gave any thought to steam catapults on the QE? Sometimes the old ways aren’t… Read more »

As always fair comments – and as you probably know I am a massive advocate for such an RFA SS solution (K.Doorman is the benchmark for me here).

I do however like the Wasp class – they are fundamentally very similar to the QEC but a bit more expeditionary based.

Chris, I believe the American’s offered to underwrite much of the cost of EMALS, in time it will work out to put less strain on the expensive air-frames and can be customised for drones or other aircraft.

I agree though steam would have been just as good, since it is a false economy to buy the B model with it’s higher life time maintenance and limited payload.

I am pleased the RN has got a carrier at all, but had it been managed better I wish we to had had more ‘bang for our £’.

The main problem I see is that the next 50 years while this and the UK carrier are in service will see almost an unprecedented shift in the ability of air power with the mass use of drones and electric aircraft coming into use. It’s almost impossible to foresee what platforms will be available in 25 years and moaning that this or the UK carrier are somehow deficient is pointless at this stage. Yes I may be drunk, but I can see that both vessels are a work in progress and built with future advancements in mind and I can… Read more »

I’m a fan.
Cheaper in the long run than the Nimitz class.

Future could be bright – if the number of F35B’s made available by the RAF can be guaranteed. I’d like to see a true joint force, maybe called something eye catching like `Maritime Air Command’ and operated under Navy control. Perhaps the new Poseidon MPA squadron could also be integrated in the same force structure!

Oh look! Another carrier without any aircraft. But for a different reason. 😉