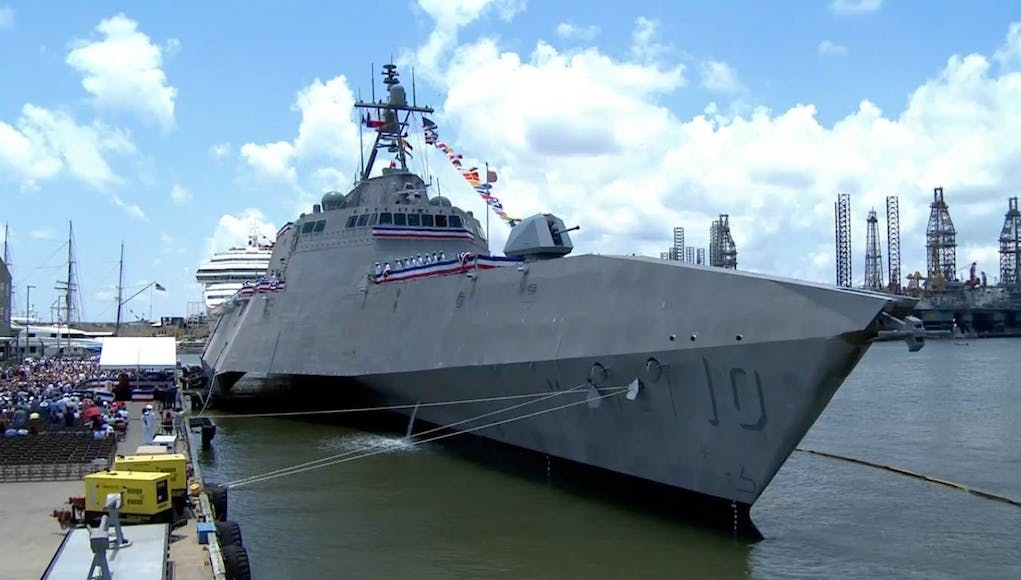 USS Gabrielle Giffords, the US Navy’s newest littoral combat ship, has been commissioned.

“As we man the rails today, blood gets pumped, the ship comes alive, and the heart begins to beat,” said Moran. “It’s the blood that is infused by the spirit, the attitude, and the courage of its namesake. We are so proud to be part of Gabrielle Giffords’ legacy to the United States.”

“This is not just a new ship. This is a new class of ship and that makes it even more challenging for the crew,” said Woodley. “They have risen to that challenge and performed exceptionally well in getting this ship ready for service.”

“It’s not easy being an LCS Sailor. We have to wear so many hats and be trained on systems and duties outside of our normal job specialty due to the small crew size. Every enlisted Sailor here volunteered for the program and we’re excited to serve on USS Gabrielle Giffords.”

The 3,200-ton Gabrielle Giffords was built by Austal USA in Mobile, Alabama. The ship is 421 feet in length and has a beam of 103 feet and a navigational draft of 15 feet. The ship uses two gas turbine and two diesel engines to power four steerable waterjets to speeds in excess of 40 knots.

The US Navy say about the vessel:

“Littoral combat ships are fast, agile, mission-focused platforms designed to operate in near-shore environments, while capable of open-ocean tasking, and win against 21st-century coastal threats such as submarines, mines, and swarming small craft.

A fast, maneuverable, and networked surface combatant, Gabrielle Giffords is capable of operating independently or with an associated strike group. It is designed to defeat growing littoral threats and provide access and dominance in coastal waters.”

USS Gabrielle Giffords will depart Galveston and begin her transit to her homeport in San Diego.

I wonder if it would be possible, to one day, fit searam to the batch 2 rivers.

I’m afraid that part of the DOD budget has been earmarked for giving away to North Korea and Pakistan.

The budget is not there today, but the question is more is it possible to fit it.

Currently the world is relatively stable from a high end conflict perspective, but if that was to change and we slide back into an era like the cold war, then defence expenditure would increase and up arming current vessels could come a reality. I assume it is much faster to up arm an exciting platform than to build new ones.

Would it ever be worth it? It’s primarily a point defence system and I’m really not sure how effective its anti-surface and anti-air modes would be in the presence of even fairly modest countermeasures. It also only has a range of about 9km. If we ever wanted to up-arm the Rivers I would have thought that a 76mm gun would be cheaper (especially wrt munitions) and more flexible. I’m still not convinced though, in an environment where every £ has 100 projects fighting to get it, that it’s worth sinking more money into Rivers when every one of those pounds… Read more »

Yeah, it wouldn’t be worth it.

8 tonnes and, unless it’s going to go where the current 30mm is now, it needs to be mounted high to get any sort of decent arc of fire which makes that weight a huge issue. Not practical and not worth it anyway. I would still return to one of my hobby horses though. Investing in drone technology would add a lot to the surveillance reach of the Rivers in such anti-smuggling roles (and also benefit many other ships in the RN and RFA). I’d love to see containerised Schiebel S-100 Camcopter capability (or similar) introduced to the RN. River… Read more »

If the worst happens and we have to go to war and it involves a naval conflict, we need numbers to ensure adequate coverage. Which is why up arming the rivers could be useful. Even a fairly basic anti air system and sonar provides some extra depth