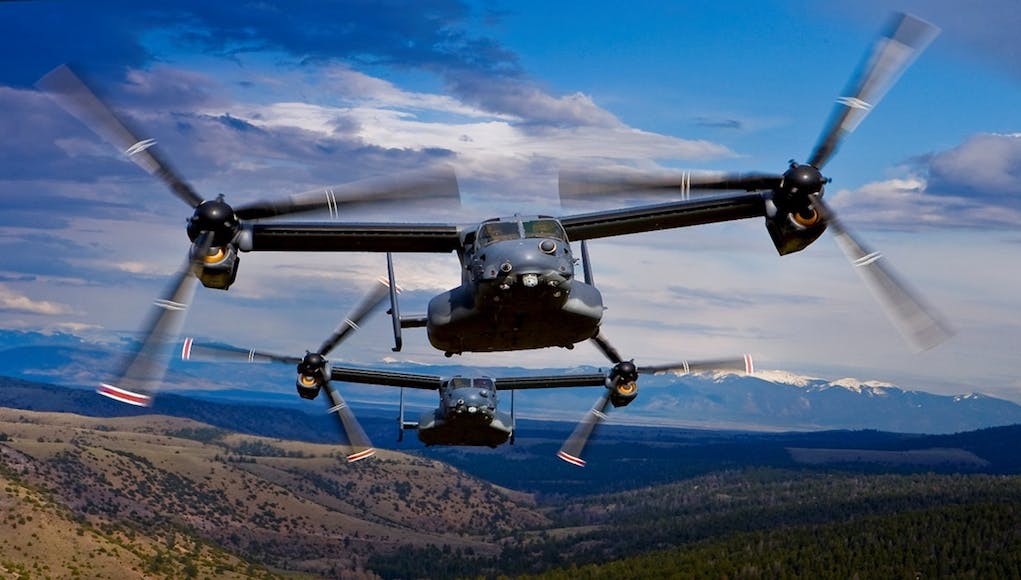 Bell Helicopter has announced today that the V-22 fleet of tiltrotor aircraft, including both CV-22 and MV-22 variants, has surpassed the 400,000-flight hour milestone.

The company say that the V-22 Osprey has been continuously deployed since entering service in 2007 with the United States Marine Corps (USMC) and the Air Force Special Operations Command (AFSOC) in 2009.

The MV-22B Osprey are operating all around the globe today, transforming the way the Marine Corps conducts assault support, humanitarian relief operations and the broad spectrum of MAGTF missions

“This 400,000-flight hour milestone is an incredible testament to the V-22’s leap-ahead capability and is a tribute to the men and women of Bell Helicopter and Boeing who build and support tiltrotor aircraft,” said Vince Tobin, executive vice president of Military Programs at Bell Helicopter.

“The Osprey brings unprecedented range, speed and survivability to the warfighter and will continue to excel in combat and in executing some of the most difficult humanitarian operations.”

The V-22 Osprey has had nine hull-loss accidents with a total of 39 fatalities. During testing from 1991 to 2000, there were four crashes resulting in 30 fatalities.

Since becoming operational in 2007, the V-22 has had five crashes resulting in nine fatalities, and several minor incidents. The aircraft’s accident history has generated some controversy over its perceived safety issues.

I would like to see the UK procure a limited number of these aircraft to support SF and the carriers, but given the costs this is very unlikely.

I do recall back in early 2000s the RN was hoping for an AWACS version of the V22 for the new carriers, but it turned out to be another pipedream.

Agree. How many would you suggest?

But I am afraid without a big increase in defence spending it’s a fantasy on my part.

thats not what I mean ,if we cant afford the RM how can we afford V22s

A while back it was mooted that we would be getting at least 6 to operate purely with the carriers. Their specific roles would include Air to Air Refuelling, Carrier On-board Delivery, and Airborne Early Warning.

However, one of the primary concerns that needed filling was the ability to lift the JSF engine. The Merlin is not man enough and the only other option is Chinook. It will seem likely that Chinook may become a permanent part of the Air Wing for this very reason. Shame its not marinised, so will rot away in no time.

So I take it the Osprey is able to lift said engine? What solution are the Americans employing to get around this problem?

Osprey tasks for the USN and USMC: Deep Penetration Deployment, Rapid Response Deployment, Carrier Resupply, and a new air tanker kit is being acquired for the ones on LHAs. The Navy bought theirs especially for transporting the newer heavier engines for aircraft like the F-35. That were on the drawing board at the time. The air tanker kit being acquired, is modular and is able to be reconfigured in a few hours. The USMC is buying it for their Ospreys because the LHAs won’t be able to launch the tanker drone the USN is getting because they don’t have a… Read more »

I heard the new Heavy RAS system was capable of handling full engine lift. New weight limit is 5 tonnes, so once fitted, big up for Fort Victoria and the Tides

No need for any helicopter to carry an engine. The RAS on tide has specifically been designed to do this and I am sure the carriers will go to sea with spare engines.

Why would we need to airlift an engine such a short distance and spare no expense in doing it. Doesn’t make economic sense to me.

They are a game changer if we can get them doing refuelling, COBD and Early warning.

Longer term I see an enhanced product taking over the chinook and Merlin role, but not for the foreseeable future.

V-22 is too expensive for what it does, horribly over engineered.

70million a pop. Not worth it for the UK. IIRC, the UK special forces already used the V-22? Leased I’m guessing?

Main advantage is the tanker the marines plan to use the V-22 as, but that’s a luxury item imo.

Anyone know the cost of the Osprey vs Chinook or Merlin? I keep hearing it is very expensive but have no idea what that means.

I read one article before – not sure how true – that the SAS was getting one Osprey for quick reaction within the UK as it flies much faster than anything in their helicopter fleet. It was allegedly going to funded by the 2Bn increase earmarked for SF. Again, not sure how true but it was interesting to read.

Maybe fuel costs? Hi David I think the UKSF Osprey story was started when the USAF flew V22’s over London on exercise and the public and press put tow and two together and decided the UK were getting them. 658 Squadron AAC ( old 8 Flight ) fly Dauphin helicopters for SF to deploy quickly around the UK and I read they would prefer V22 as obviously its much faster to get to a location. Or, these stories may be confused with UKSF possibly training with the aircraft. Whatever the 2 billion increase, the fact its all classified is very… Read more »

Always difficult as the foreign sales cost is almost always considerably higher than what the US pay but as an inductor some cost below (treat with care).

Of course it depends on precise configuration – but this is based on a number of information sources. There’s also a great article here on equipment cost for those who like buy British.

Not Osprey. Bell V-280 for Crowsnest, refueling and utitility.

Too small. It has about half the capacity of the V-22 (10,000lbs useful load vs 19,460lbs for V-22). Some people are sceptical that even the V-22 makes sense for refueling since the ro-ro AAF rig can deliver slightly less than 1 full F-35B’s tank full of fuel. I still think in an ideal world having V-22 Osprey with AAR refueling rigs on the QEC would be a good thing (but not likely due to priorities and budget pressure meaning we are not in an ideal world) but more than halve the fuel carrying capacity (the rig itself is a fixed… Read more »

Julian I have read somewhere that the F35b’s use a considerable amount of fuel taking off and if a V22 Osprey refuelled 2 planes shortly after take off (there would be an optimal distance no doubt) that this would extend their range considerably (2-400m). For me this is worth it as it is a game changer for our carriers and really does extract maximum value out of the carriers. I am sure we could do a deal with the US to purchase 16 of these as they really are that critical. I am sure it wont happen due to costs… Read more »

I hadn’t read that but a disproportionate amount of fuel used during takeoff is a theory that I have had for a while hence thought the same as you, i.e. a V-22 able to top-up multiple F-35s shortly after takeoff would be valuable. Like you I only pour a bit of cold water on the idea because there are just so many calls on a budget that is reported to already have a £20bn black hole in it in terms of supporting currently announced projects hence I find it hard to believe that money would be allocated to such a… Read more »

The burning of fuel on takeoff is why the Osprey tanker kit is being purchased by the USMC for their LHA based F35s.

Interestingly I was looking at a number of sources yesterday on the budget – not least my tax return.

The stated UK MOD budget against both GDP and my tax expenditure is £40bn in 2016. Not sure where a black hole is allowed to come from as £40bn is fairly good.

This is based on a 2.09% of GDP and also 5% of Tax revenues – interestingly we spend more on servicing the national debt than defence.

Agreed. I did not realise that V-280, I understand is to replace the Osprey can only carry half the load at almost the same speed. No improvement there. But I think the RN needs to be able to refuel the F35’s and improve the AWAC performance.

V-280 isn’t meant to replace the Osprey it is meant replace Blackhawk and Seahawk variants of the UH-60. Osprey is meant to be replaced by an as yet to be announced platform.
The reason there has been so much excitement on the V-280 is the Army wants it and in the US they procure the most helos. When they dropped out of the Osprey program in 88/89 it caused the cost per unit to skyrocket. So with them pushing the design prices would be much lower and exports therefore more likely.

i dont know, i think the uk would be better looking at the sikorsky s-97 raider and derivatives thereof

I think if we go for the Bell – then we really need to sit down with LM to set up significant manufacturing and maintenance facilities in the UK for the Eurozone area.

We do seem to be buying an awful lot from them these days.

The trade offs there are this: Lockheed is historically more likely to license out or set up maintenance facilities to win contracts. Lockheed by the way may wind up involved in both projects since they acquired large interests in Sikorsky. Bell Helicopter has historically HATED doing manufacturing outside of its home State and one or two others. They really only had one good manufacturing relationship outside North America and that was with AugustaWestland. Since Leonardo took over AW it has been going down hill. Due to Leonardo complaining that Bell uses it’s relationship with the State of Texas unfairly on… Read more »

Osprey for AAR would be great but I can’t see RN being in a position to afford it at present.

Perhaps what we could hope for is, if the USMC deploy a few of their F-35b on the QE class as proposed they will bring an Osprey with them .

It seems though, in regards to AAR, that Air Tanker have an exclusivity clause written into the contract for the use of the Voyager – all UK fixed-wing aircraft have to utilise RAF Voyagers owned by Air Tanker, unless either on joint exercises with other nations, or on operations. Otherwise the MoD has to pay a penalty. So, even if there wasn’t a £20bn black hole, there’d still be no chance of Osprey being purchased for that role.

Of course, the colossal idiocy will really be shown up once RAF and RN Lightnings start refuelling from USN Ospreys.