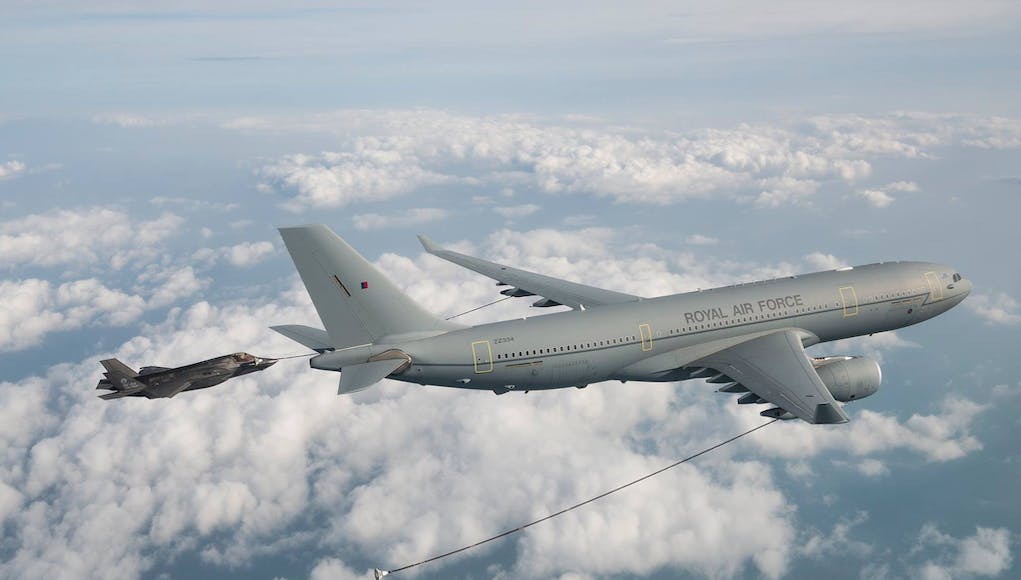 The RAF has deployed a Voyager tanker aircraft to US Naval Air Station Patuxent River in support of F-35B Air to Air Refuelling trials.

“The flight tests will initially be conducted as ‘dry contacts’ before moving into ‘fuel passing’ at various points throughout the flight envelope. This flight clearance will support Initial Operating Capability and the re-location of 617 Squadron to RAF Marham during 2018.”

According to an RAF article:

“The UK has 19 personnel embedded within the F-35 Development Test Programme at Patuxent River, many of whom are set to embark on a US Marine Corps amphibious vessel for the third and final set of Development Test Sea Trials for the F-35B, ahead of the UK’s own F-35B Ship Integration trials which are scheduled to take place on board HMS Queen Elizabeth in 2018.”

The F-35B’s maiden operational deployment is set for late 2017 and its bound for the Western Pacific. The jet will deploy aboard an amphibious flattop and the US Marine Corps are planning a more powerful escort force to support it, according to Admiral Scott Swift, head of Pacific Fleet, as reported by the Marine Times. The F-35B has already flown from American assault ships as part of a series of tests, which largely went well.

….. and how many US personnel looking at that Voyager, while still waiting for their KC-46 Tankers 8 years later and counting, were thinking “How the hell did we not buy this thing?”
As always the military pay the price for political corruption …

I haven’t seen any reports about Voyager regarding its performance. Anyone know how its doing compared to the VC10’s and Tristars?

Technically we (UK MoD) didn’t buy any of these either. They’re owned by a commercial company (Air Tanker Ltd), a core of the fleet available to the RAF and extra surge aircraft leased out to other companies when not needed. Take a long haul Thomas Cook holiday and you might get to fly on one; it’ll be in Thomas Cook livery and internal fit-out though and with the drogues etc not fitted but if war or some other demanding emergency broke out could be called into service to boost the tanker capability.

If you really think that anybody in the US is thinking what you think they are thinking then you are even more provincial than the average Brit.

@ PKCasimir
Oh sorry I forgot. The average Yank doesn’t realise there is a world outside the US of A.
You forget of course that those who WILL be seeing it in action are the same folks who are still waiting for their new KC-46 aircraft years after we had all our A330s delivered. Hence my point that HAD they bought it as they intended before being shafted by Boeing Pork Barrel Politics THEY would now be using it.
Not sure where being ‘provincial’ comes into it at all….

I think the main point here is that we Brits think its a shame that politics got in the way of military need. Your military picked the best aircraft for the task it wished to perform and then too many people with a financial stake in the loser platform went on a sulk and unfortunately your military suffers for that political greed. Same has happened here but if you want to be the best and remain there, then your military needs to make the decisions not the politicians!

The USAF can see what they missed out on! 😀