This agreement allows for the sharing of certain technologies to aid the development of future generations of missiles developed by missile contractor MBDA. This includes the helicopter-launched anti-ship weapon, termed Sea Venom and other future national and joint programmes to meet British and French military requirements over the next decade and beyond.

This new Intergovernmental Agreement builds on increasing collaboration in this area since 2010. It will allow closer working and information sharing on MBDA’s missile technologies while providing the necessary legal assurance to both governments on issues such as the protection of national data and security of supply.

“Our defence relationship with France continues to thrive. The joint development of next generation missiles is just the latest example of this.

Sharing knowledge and information more deeply will help us develop better weapons more efficiently and keep both of our countries safe.”

It follows work carried out by both countries with MBDA to create Centres of Excellence, consolidating their specialist design and engineering skills. Four of these centres are being established at first, for Weapon Controllers and Test Equipment in France, and for Datalinks and Actuators in the UK; another four, on complex warheads: guidance and navigation systems; algorithms; and software will follow.

Signed in 2010, the Lancaster House agreement was brought into existence to solidify the relationship between the two allies and provide greater defence cooperation.

As in we can be reasonably sure they have similar interests etc. And we work closely with them. Previous projects have done pretty well on occasions with them.

…or do you have reservations with this type of deal with French?

I have to say I’m not entirely comfortable with this. During the Falklands War France allowed its technicians to stay in Argentina prepping exocetes And we are now sharing anti-ship missile technology? I know it was all a long tim ago, but it is a little concerning.

Both nations share all manner of technology and equipment.

I used to think that too. But a lot of the facts around France and the Exocets remained secret for some time. I think when mor facts emerged some years later the French were actually providing much more assistance than they were initially publicly recognised for.

Hardly sharing it… Mbda are a European missile company.. It’s a joint collaboration.

Concorde. Gazelle helicopters. Jaguar fighter bomber and others all joint built with France. Decent machines i would say. ?

Actually, Dave Morgan (RAF Sea Harrier Pilot) and the late Sandy Woodward (commander of Naval task force (except the amphibs) both revealed that France provided a lot of support than people give credit for – from their intelligence services assisting denying black market deals to Argentina, to intel on the missiles themselves (though admittedly, until it happened, no-one knew how a AShM would impact a modern NATO vessle in combat conditions, even the USN), also the French provided training opportunities with the sea harriers in DACT with their Mirage III’s and Super Etendards. Of course, a (mostly) private company would… Read more »

Yup. Do a deal with the French and make sure you count your fingers after shaking on it. They lie to get more workshare then compete using French only products using inside information. Don’t believe me? Check the Anglo-French helicopter agreement, the Anglo-French Jaguar, Anglo-French-Italian Horizon destroyers. Lots of history of being very bad partners.

Yep. History on my side. 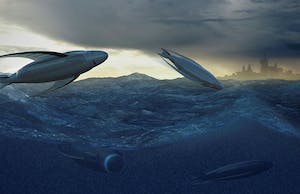