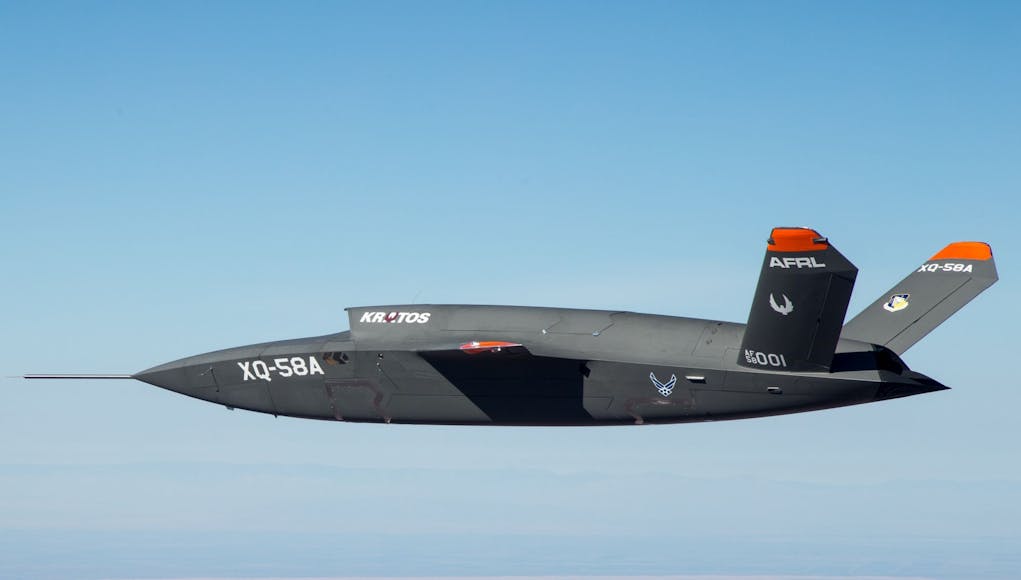 The US Air Force Research Laboratory (AFRL), along with partner Kratos Defense and Security Solutions say they have completed the successful fourth flight test of the XQ-58A Valkyrie low-cost unmanned air vehicle demonstrator.

During the test, the they say that the Valkyrie demonstrator’s flight successfully met all of the test objectives, and the envelope was expanded beyond prior tests before safely landing in the Arizona desert.

“Flying at this altitude helped us gather important data such as vehicle response to temperature and vibration, which will prepare us as we move toward our next flight test,” said Wipperman.

This test represents a return-to-flight for the XQ-58A, which experienced a mishap upon landing after a successful 90-minute flight in October 2019. Following a Safety Investigation Board probe into the mishap, Wipperman says the resulting information was outbriefed to the convening authority, and the recommendations were taken and approved to ensure the success of this latest test.

“We’re very pleased with the outcome of this fourth flight test,” said Wipperman.

“We were able to show recovery for a successful flight at even higher altitudes. Given that we have overcome these challenges, we have confidence that the aircraft can continue its progression into flying in more representative conditions.”

Developed as part of ‘Low Cost Attritable Aircraft Technology’ portfolio, the XQ-58A is designed to be “a runway-independent, reusable unmanned air vehicle capable of a broad range of operational missions”.

Que Taranis-Loyal Wingman. This is how the start of any future air campaigns might begin with drones suppressing air defence systems and attacking enemy ground installations.

As the article states, Low-Cost Attritable Aircraft Technology’ plus pilot safety makes this combination the perfect choice, not to mention the added range it will afford us.

After the very successful test flights of Taranis, further investment in this technology should be made available to keep us ahead of the ball game.

MAGMA, another fine example of what we can achieve.

Is the idea behind this to further reduce RCS?

One would think so rfn_weston, along with pilot safety and extended range I would have thought.

As radar technology advances, new ways to mask an aircraft must be found to counter it, so reducing the RCS further would clearly help in getting it safely to the point of a missile launch.

Standoff munitions with radar-absorbing coatings might also be a future option having an even smaller RCS than the launching aircraft?

These concepts are getting extremely expensive though. If a ground strike uav could fly in pre programmed following the terrain it may as well be stealth like currant TLAMs. The main benefit is that it wl fly back so reusable.

The link attached sheds more light on stealth technology. The research section towards the bottom makes interesting read too, including a link to Plasma Stealth.

“By Moore’s law the processing power behind radar systems is rising over time. This will eventually erode the ability of physical stealth to hide vehicles.”

Yes, the Magma uses blown air to control the airstream passing over/under the wing so does not need conventional flying controls. Flying controls when being deflected are great radar reflectors, as not only are their end caps of the controls flat, but they are probably not coated in RAM. When the control is at full deflection, the wing will also show a nice flat panel again probably not coated in RAM. The flying control gaps can also be great radar reflectors, depending on the radar’s wavelength. These gaps are necessary to stop the flying controls fouling the wing etc when… Read more »

Is the reduced rcs of the uav using the blown wing worth the massive increase in cost and reduced stability. I think its a great demonstrator but unlikely to see fruitition. I would rather we built a set of 12 working taranis uavs that could be constantly upgraded but used in a real conflict scenario. If they prove effective then add another 12.

Yes, the Magma only had blown air to replace the roll normally taken by the ailerons. They also weren’t the full length of the wing just a small portion. So the videos that show it flying and being a bit “wobbly” are down to the small surface area of the blown wing. In the future, the idea would be to fit the system to the full length of the wing. It should also replace the roll taken by the elevator and rudder. The system is an evolution of the blown wings used on aircraft such as the Buccaneer. To be… Read more »

Definitely, un-manned is the future, I would love to see us push ahead with Taranis.

Any data on its speed? If it is to follow the Loyal Wingman principle for manned/unmanned teaming then it needs to be capable of cruising with fighter jets.

Does one assume that the new engine for Tempest might be a consideration?

In an aim to be more electric, more intelligent and to harness more power, Rolls-Royce recognised that any future fighter aircraft will have unprecedented levels of electrical power demand and thermal load; all needing to be managed within the context of a stealthy aircraft.

Sorry – I should have been more specific. Any data on the XQ-58A Valkyrie flight and speed characteristics?

This is the best information I have TwinTiger.

Sorry, forgot to add the link!

Many thanks.
Whilst its ceiling and range support a Loyal Wingman application, it appears that its maximum speed is on the low side of the speed most modern fighter aircraft cruise at, which IMO would limit the Valkyrie from that key role.

We await to see if the Boeing BATS version will be faster.

The airframe has the same upside down design for stealth as the USAF’s now retired AGM 129.