Home Air 10,000 troops and 35 warships begin to arrive in Scotland 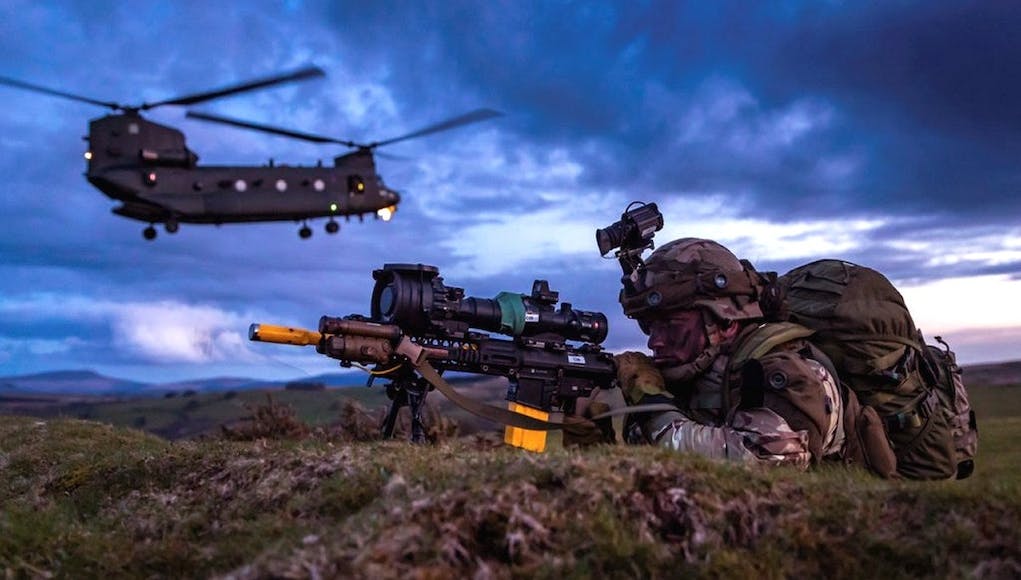 10,000 personnel, 35 warships, 5 submarines and 59 aircraft from 13 countries have started arriving in the UK.

Please note that this article is from last year, if someone has shared this due to recent events relating to Coronavirus then please make them aware of this and ask them to please read what they share in future.

The forces will take part in Exercise Joint Warrior until the 11th of April.

According to the Ministry of Defence, after an initial briefing weekend at HMNB Clyde, the exercise splits its participants into two opposing Task Forces starting in the Scottish Exercise Areas (water and airspace generally to the West of Scotland, particularly The Minches).

As the exercise progresses elements of the Task Forces will progress south to conduct an amphibious exercise off the South West Coast of Wales.

Joint Warrior will take place across the UK:

The Ministry of Defence say that the aim of the bi-annual Joint Warrior exercise is to allow the Royal Navy, British Army, Royal Air Force and their allies to ‘conduct joint operations involving different forces and units and against a range of current and future threats’.

Exercise ‘Joint Warrior’….so that is what happened to all the RN drug seizures!

Not using Macrihanish this year?

Macrihanish-nice part of the world Daniele!

Never been there. Bit breezy I hear and they like a game of golf at the end of the runway.

Was there with a bunch of Saffers in 2009 planning to paddle across the Irish sea to County Antrim. The weather beat us though. Visited the site where the RAF Chinook crashed on the Mull. Bit breezy isn’t the word for it-winds that go right through you-even on Midsummers day!

I’m getting fed up with the “breeze” here in Surrey to be honest.

It’s been blowing for over a week!

Ha ha Danielle! lol I live on the west coast in Irvine, you have to weight yourself down at the moment to be able to stand up.

It’s to guard against rebellion in the case of a no-deal Bword.

Gibraltar is due for co-sovereignty due to Brexit negotiations. Otherwise the EU under Spanish pressure will say their outside the negotiations for a common trade deal. That will economically destroy Gibraltar. So we will have to grit our teeth and bear it. Brexit really is the gift that keeps giving.

So no, the Spanish are welcome or we get the boot from NATO as well. Bad to worse situation.

Oh Dear, Oh Deary me mate. You Are So wrong it’s Embarrassing. For a Start, The UK ain’t getting Kicked out of NATO. ( Seriously ???? ) If you actually believe that then you are simply Deluded. As for the rest of your Post? well, I can’t even describe how much of an Idiot You really appear to be and I should know, Most here Probably think I’m the Biggest.!!!!

Capt, that must be why 99% of Gibraltarians votes to remain in the EU.

The Rock’s future will be agreed separately through bilateral talks between the UK and Spain. The price of a EU deal will be Co-sovereignty.

Patriotism is all very well but realism must rule.

Btw, if we exclude a NATO member from participation in exercises, it will be the first step in leaving NATO. Which is why we invited them.

That’s a large force to put down the SNP insurrection…

Never underestimate the power of Irn Bru Sean…
The SNP has strategically placed tankers of the stuff to refuel the tartan troops.

The SNP would kick their asses.

Fur a start the Scots are used to the weather….

Its all training in the lead up to the highly organised WW3 which the major players are planning. Nth. Korea is the fuse with China, Russia and Iran waiting in the wings to take on the west. Australia is Chinas prime target because we have everything they want, land, resources, water, fisheries and girls. They have been planning this for over 100 years, that’s why they only wanted boys so they ended up with a massive army. When they are mostly killed off, they will use our girls to repopulate a vastly diminished population. They have been buying scrap steel… Read more »

I got confused when he said that they got rid of all the Females to have more Males in the Army, or words to that effect.

Last time I looked, My Never Regions were pretty crap at Giving Birth to Boys or Girls. Am I Missing Something ????????

Sometimes, This place makes me feel Happy when I post Crap and read It back in the Morning and then look at other posts.

I thought, maybe wrongly as it’s a bit bizarre, that he was referring to the reported Chinese practice of leaving female babies to die.

Some of this bears a thought or two. China is very active in Africa building infrastructure, a base on the Red sea and mining. Almost like the bad old colonial days but with paper gloves. Plus they do think ahead unlike ourselves and they have put about the story that China got to Africa before the Europeans but left. Hmm.

Dude, the TRUTH is way more scary and whack-a-doodle demented than any Dan Brown Novel or any HollyWeird Movie, that’s for sure

Joint Warrior is a regular exercise. Happens every two years.

Does British nuclear armed submarines ever visit Australia? I hope our new carriers do.

They let the USN SSN’s visit so I see no reason why they shouldn’t visit in the future. The Indina Ocean is the only standing SSN task at the moment I understand.

The Australians aren’t keen on nuclear weapons ‘visiting’ them.

It is true I presume that some ships of the Task Force had to unload before heading into the South Atlantic.

Ah right, but no doubt our nukes protect OZ also. And we British let off some of our first Nukes in Australia, I’m surprised we got away with it back then.

Dave…I think you need a lie down…

Being a shooter myself I would very much like to get my hands on the optics on top of the rifle in the picture at the top of the article. I would probably have to sell the bike to fund it though.

What would be a good naval exercise is for NATO to try to get a US armoured division convoy through the Atlantic whilst an unknown quantity of submarines and aircraft is attacking. The condition is that the defending forces would be what would be expected as the NATO navies would have other commitments, so I would expect something like two Anti Air destroyers and four Anti Sub frigates possibly with an assault ship acting as an anti sub helicopter platform and one or two submarines as an escort. As for the scope on the picture, god would I like that… Read more »

Hello Ron, I too would like that Scope. Mine are all so Boring In Comparison.

I’d suggest you add UK carrier air power and land based UK, Norwegian, US and possibly Canadian P-8’s to your consideration. Some ask why the UK needs carriers, IMO this is one compelling reason, i.e. to provide greater assurance of reinforcement capability to Europe from North America. The carrier aircraft would hold adversary air attack and air surveillance against the convoy at bay. The P-8s patrol for subs and ships as first line of defence for the convoy. The carrier air might also provide screening/protection for the P-8s against long range air or surface ship SAM attack, when the P-8… Read more »

Me too … just in time for the latest push for an independence referendum.
Though looking at the English v Scottish versions of the Sun ‘newspaper’ is enough to confuse anyone.

All this Bull about Soldiers in Whitehall etc because of a possible No Deal Brexit is 1st Degree Crap, it is in case of Brexit NOT going ahead or TMay tying us into EU forever and ensuing Civil War!
NATO when I was in was a genuine need to counter Soviets, after 1992 it has become a Terrorist Organisation headed and run by the US Empire in order to move East!