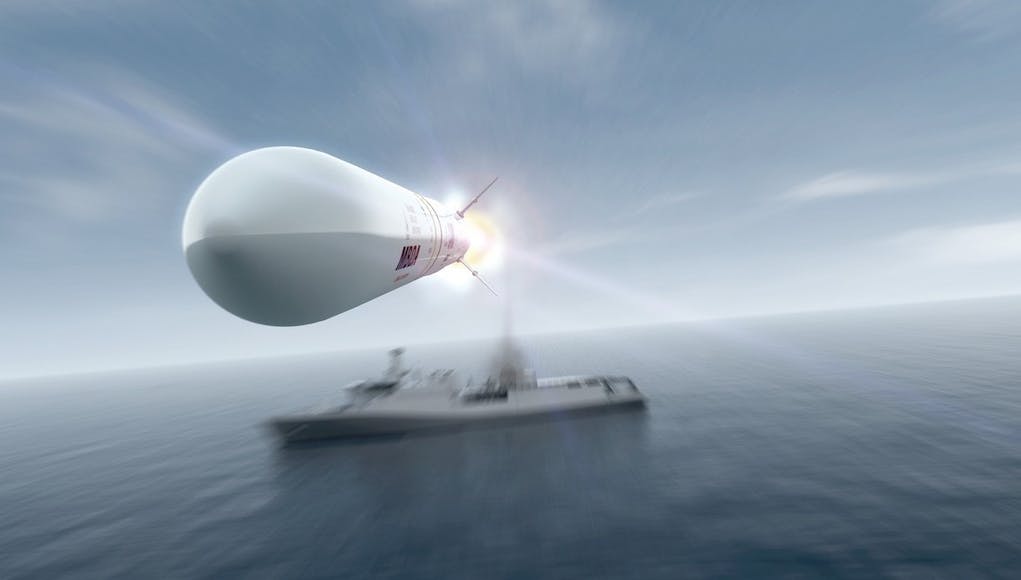 The Ministry of Defence has awarded a £100m contract to deliver the Sea Ceptor air defence missile system for the new Type 26 Frigate.

The new ‘Demonstration and Manufacture’ phase contract will support additional design work and allow equipment to be manufactured to equip the entire Type 26 fleet.

According to a press release, the work will sustain around 85 jobs, including 55 at MBDA’s sites in Bristol, Stevenage and Lostock and 30 across the UK supply chain.

Companies on the supply chain include Babcock in Leicester, Churrock Engineering in Chelmsford, Quadrant in Todmorden, API in Milton Keynes, Meggitt in Stevenage and Aish in Poole.

Defence Secretary Michael Fallon has also confirmed the Type 26 Frigate order on the Clyde and revealed that steel will be cut in Summer. Work on building eight Type 26 frigates at Clyde shipyards will begin the summer of 2017, the defence secretary has announced.

Michael Fallon said the date for cutting the first steel would help secure new investment and safeguard hundreds of skilled jobs until 2035.

The missile system has already been selected by the Royal New Zealand Navy for use on board their Anzac class frigates, with considerable potential for additional overseas orders in the future.

“Sea Ceptor will ensure the Royal Navy’s Type 26 Global Combat Ships are protected as they, in turn, protect the UK and her interests, keeping our nuclear deterrent submarines and the UK’s two new Queen Elizabeth Class aircraft carriers safe on operations around the globe.

Supported by our rising Defence budget and our £178 billion equipment fund, Sea Ceptor is yet another example of how the MOD investing in cutting-edge kit to help our Armed Forces meet future threats.”

Sea Ceptor is planned for use on board the Royal Navy’s current fleet of Type 23 frigates, which will eventually be replaced by Type 26, with three vessels currently being fitted with the system to allow sea trials throughout 2017.

The system offers significant improvements over previous air defence systems, such as Sea Wolf, with the ability to engage multiple targets more effectively at a longer range.

“Sea Ceptor is the future of air defence for the Royal Navy, and it is fantastic that Defence Equipment and Support and the MOD has led from the front in its development, working with industry to provide the UK’s Armed Forces with world-leading kit.”

When will a journalist who actually knows his onions like many of us who follow UK defence matters actually take Fallon to task for his continuous mentioning on rising budgets, more ships, more planes, more everything nonsense?

On a positive note good news on Sea Ceptor.

Retirement of Harpoon will leave RN warships without a heavyweight surface-to-surface guided weapon The United Kingdom currently has no funded programme for a Harpoon replacement The United Kingdom will withdraw the GWS60/Harpoon Block 1C anti-ship missile from Royal Navy (RN) service at the end of 2018 without replacement, IHS Jane’s has learned.Furthermore, with the helicopter-launched Sea Skua missile going out of service (OSD) at the end of March 2017, the RN will be devoid of any anti-surface guided weapon for about two years This is absolutely ridiculous we have Russia knocking on the Door and we have no Anti ship… Read more »

So all new warships built by Bae on the Clyde, so another bunch of over priced, late delivered and not fit for purpose warships again. Look at the type 45, under armed, expensive and with major design flaws. Until the government punish Bae by awarding contracts to others nothing will change, the country would be better off buying from German yards.