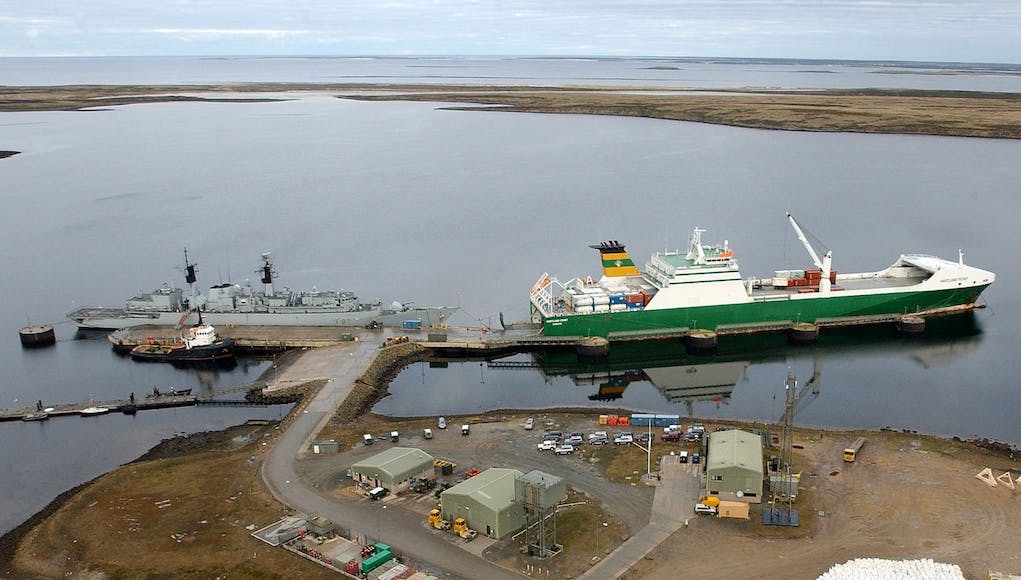 The £19m contract to upgrade the Falklands Mare Harbour was agreed between VolkerStevin, based in Preston, and the Defence Infrastructure Organisation.

The project, which is due to be completed in September 2017, will improve military capability in the Falklands as the current harbour berth is unsuitable for the class of vessel which services the islands. The improvements will better support and facilitate secure mooring for visiting vessels. There will also be a new jetty to support small boat operations.

Improving Mare Harbour is an important part of our major investment plan to modernise the Falkland Island’s infrastructure. This will boost the capability of our Armed Forces and help support greater economic opportunities for the Islanders.

We are delighted to be working on the Mare Harbour contract in the Falklands for the DIO. As a specialist in marine construction works, we look forward to working on this design and build project for the roll-on roll-off facility upgrade. We have worked previously with the DIO and are currently working on a similar project with them at Portsmouth so are happy to be able to build on this existing partnership. We’re so pleased to be working as part of this investment to modernise military infrastructure on the Islands and look forward to starting.

Mare Harbour is a small settlement on East Falkland, on Choiseul Sound. It is mostly used as a port facility and depot for RAF Mount Pleasant, as well as a deepwater port used by the Royal Navy ships patrolling the South Atlantic and Antarctica, which means that the main harbour of the islands, Stanley Harbour tends to deal with commercial transport.

Recon it would be great if we could upgrade it to a standard where the hms Queen Elizabeth could visit.

We’d need better anti air cover than the Rapier’s currently there to look after her… or a type 45 nearby just in case the Argies got a bit cocky!

unfortunatly the deep water area of the harbour(i know because ive been there!) is too shallow and would need a huge dredging programme

Argentine air force has grounded ALL its jet combat force due to poor maintenance and there is no immediate prospect of any modern replacements. I think the Islands,Queen Elizabeth or any other British ship are safe.

Still need to be safe. And it would be a almighty fuck you to Argentina if we park our aircraft carrier at the Falkland Island.

But yet it’s still ours to park an aircraft carrier.

There’s no way the Queen Elizabeth would be allowed to visit the Falklands if it would mean the Argentineans would be offended. The UK Government Foreign Office doesn’t believe in our country doing anything that might offend any other country as it’s run by spineless liberals. The ships of the Royal Navy should be free to visit any British territory regardless of who might be offended. Someday if we’re lucky we might get a government run by Britons who are proud of their country, it’s history, it’s achievements and it’s positive contributions to the all the peoples of the world!

The ONLY time you’ll see an aircraft carrier in Falklands waters is if there are indications the Argentinians are getting itchy feet again, unless and until that happens, the Foreign Office will want a quiet life and block any attempt by the MOD to fly the flag with HMS QE or PoW.

Gonna need to once that oil starts pumping

The Rapier is being replced by MBDA’s future local area air defense system (FLAADS) and Giraffe AMB radars in the near future.

Would there not be a Type45 with QE or PoW as a matter of course along with a Sub?

a couple of astute class subs would shut the argentine coast down.

About time mare harbour got a face lift

It would be a waste sending a carrier to the Falklands, as it would serve no purpose

It would mean moving a large part of our navy there in support and for what benefit other than flag flying.

The carriers need to be kept near where they can be useful, should needed, which at this point is mainly the middle east.

Also, I am all for not offending Argentina, let’s not try and push them into a corner, where we end up with another war. Much better to not offend them and focus on building trade links with them.

There would be no need to send the carrier, having Typhoon jets plus the new air defence missile system on the islands later this decade will do the job that’s needed. There would always be the option to send a army or marine battle group plus extra Typhoon or F35 jets if needed. I agree with the comments above, the new carrier will be very busy in other parts of the world most of the time. But it’s good that a future uk government will have several different options if needed.

Thats a load of cash!

The notion that Argentina could get cocky is a bit far fetched but that doesn’t mean we should take the eye of the ball.

What will P Off the Argies if the Islands start to look like overseas military base.

New post () has been published on Naval, Military, and Marine Life https://ukdefencejournal.org.uk/19m-contract-signed-falklands-harbour-improvements/ | John's Navy and other Marine or Military News

[…] Currin (JC) posted New post () has been published on Naval, Military, and Marine Life https://ukdefencejournal.org.uk/19m-contract-signed-falklands-harbour-improvements/ Posted by – David Arkwright Check this out on Google+ Like this:Like Loading… on […]