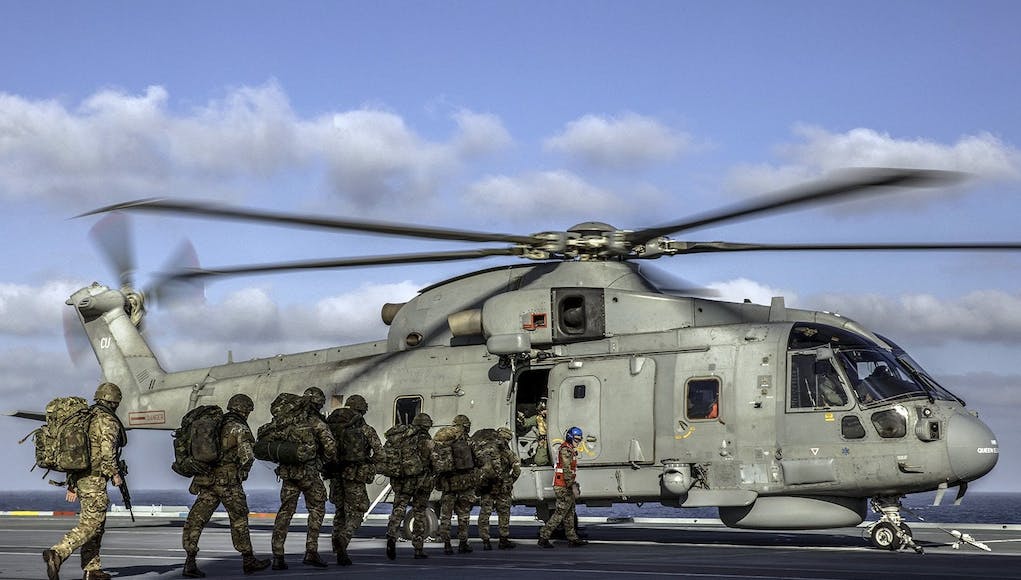 Recently sold HMS Ocean could carry up to 690 Embarked Military Forces (EMF) – Royal Marines and Aviation Group personnel – in addition to her ship’s company. HMS Queen Elizabeth can embark up to 900, in addition to their ship’s company, in support of their missions and tasks and a flexible mix of aircraft subject to the operational tasking.

According to the Royal Navy, the troops were processed from their accommodation, through the ship, collecting kit, including weapons and ammunition in a carefully orchestrated process, in through the massive hangar and onto the flight deck to simulate being launched ashore by helicopter.

“The Royal Navy’s amphibious assault capability has to now been provided by assault ships HMS Bulwark and Albion and the Landing Platform Helicopter (LPH), HMS Ocean.

Whilst HMS Queen Elizabeth does not have the surface assault capability with landing craft of the specialist ships, her four-acre flight deck provides plenty of scope from which to project manpower and equipment ashore using the variety of helicopters she will be able to host.”

Having previously served on HMS Ark Royal, the Ship’s Amphibious Operations Officer, Lieutenant Colonel Mark Searight Royal Marines says the training today is as relevant as it ever was:

“We are mirroring exactly what we did in our previous carriers and HMS Ocean; our SOPs are almost identical. But there has been a degree of the Marines having to relearn some of the skills that we took for granted before our most recent land campaigns in Iraq and Afghanistan.

Marines are an adaptable force; that’s our USP as the UK’s amphibious forces. So to ask them to spend time at sea is not a surprise or a task too far for any of them. But we’ve taken some time away from conducting major sea campaigns so this sort of training is extremely valuable.”

In order for the ship to demonstrate an initial capability to operate in the Landing Platform Helicopter (LPH) role, it should be able to project Royal Marines and their equipment ashore by aviation, prove ship to shore communications, sustain the troops for the period they are ashore and recover them back to the ship on completion say the Royal Navy.

I imagine PoW will be used in her early career in a similar role to USS America, as she is being enhanced for amphibious ops during construction. HMS Queen Elizabeth will develop carrier strike.
One thing is certain the two new ships will offer a range of capabilities we haven’t possessed for a generation.
They certainly make Ocean and the Invincibles look severely limited by comparison.

But ocean was much better suited for the role of a LHA.

The proof will come from the Marines when they do their first full commando air assault exercise.

Agree although 2 carriers only ensures 1 is available at all times. If we are going to use a £3.5 billion strike carrier as an lph then it would be wise to have a third ship in service of this class. I wonder what the cost of a 3rd ship would be now we know how to build them and bring them into service?

what is the rationale of the third?

so we always have more than one available for usage

No. If we are going to build a third vessel to be a LPH, then build another Ocean, not QE carrier.

Yes, the QE’s are too expensive & key strike carriers to be risked too close to shore (+ have such a large crew). A light, Ocean type, replacement is exactly what the LPH needs to be. Potential for additional longer ranged Heli insertion is useful so long as the carrier strike core of our navy is not compromised. We operate both carriers so one is available most of the time, which to me means both are primarily strike carriers.
With such a tiny escort fleet our QEs should have better AA/ASM defences than just Phalanx.

Yes but if we built a QE size LPH it would be much cheaper than the full carrier version. It would only need basic tech and software for radars, comms just for a start.

No need for more QEC’s – we cant fill the two we have. The key for me is the solid stores ships need to do far more – a Karen Doorman can hanger 6 merlins or 2 Chinook and probably take 3 or 4 Ship to Shore Connectors and for me this is the future. 9 of these would be able to give us a fantastic humanitarian response fleet as well as stores and amphibious capability. Let us not forget we would need at least 60 Merlins (that we dont have) to get the most out of these. I dont… Read more »

sick of this BS reporting.

our laughable 3BN so called supercarrier and pathetic pull is.something.

what a farce we are.

Work on your grammar before commenting please.

I literally have no idea what you just said…

Aviation can only take so much equipment ashore. The LPDs are needed to support QEC.

I don’t think anyone is/would disagree with that.

Please excuse my ignorance, but where are the RMs going to be accommodated? Where will all their kit and munitions be stored in relation to their location for ease of distribution. How will this impinge on the ship’s primary role? Will we see a return to camp beds in the hanger? after all these ships have been designed as ACCs not LPHs. Can someone please allay my fears

The carriers were designed to accommodate marines. POW and later on QE will have slight modifications to make them more suitable to the role although they can already carry it out fine. The carriers act as both LPHs and strike carriers, multi-role.

Hello Albion, The QE Carriers are not designed to replace dedicated Amphibious Assault vessels like Albion and Bulwark, nor do they have the ability to carry beach assault craft on Davits like the LHP class HMS Ocean. That said, both QE carriers are designed to carry approximately 8 – 9 Royal Marine Company’s. The design caters for troop weapons/kit storage and route paths inside the vessels providing ease of access to/from accommodation and transport points. The troops are not sleeping on the floor with their kit in a pile:- they have their own large billeting cabins with numerous bunks and… Read more »

Sorry Ben P, just seen you have already answered Albion…
Message to UKDefenceJournal Admin… can you give us the ability to delete/amend our post please.
Thanks,
Ivan

Thanks Ivan, most helpful

I’ve seen a lot of comments about people’s reservations regarding the use of QE and POW as assault carriers, primarily pertaining to how close to shore they’d have to bring them. I’m no expert, but isn’t that exactly what the USMC does with their America class without any reservations? They are part of a large combat group, for sure, but if we’re deploying marines ashore then we’re going to have a full battle group too. The presumed mixed air wing of F-35B and helos, plus T45s and T26s, in addition to Astutes subsea (?) provides a very broad safe area… Read more »

Amphibious warfare means landing on the beaches. There is no getting away from that. This is a hamfisted exercise from the MOD showing that troops can be landed by helicopter from a carrier. Big deal. Tell me something I don’t know. Heliborne troops secure specific objectives whilst the heavy stuff gets unloaded on the beach. Tanks, Vikings, mortars, transport. If we don’t have that capability then you are left with mere ‘raiders’ who will have to be extracted at high risk afterwards. Negative comments, these are not but we cannot keep kidding ourselves by pretending that by doing away with… Read more »

Well, I suppose the son of the British Empire being the Galatic Empire in Star Wars, had assaults from Super Star Destroyers, not too different from Super carriers. It’s not best, but even the Galactic Empire had budgets too after dealing with the rebels. 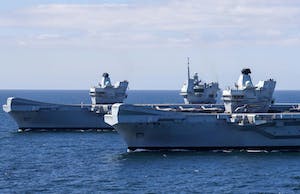