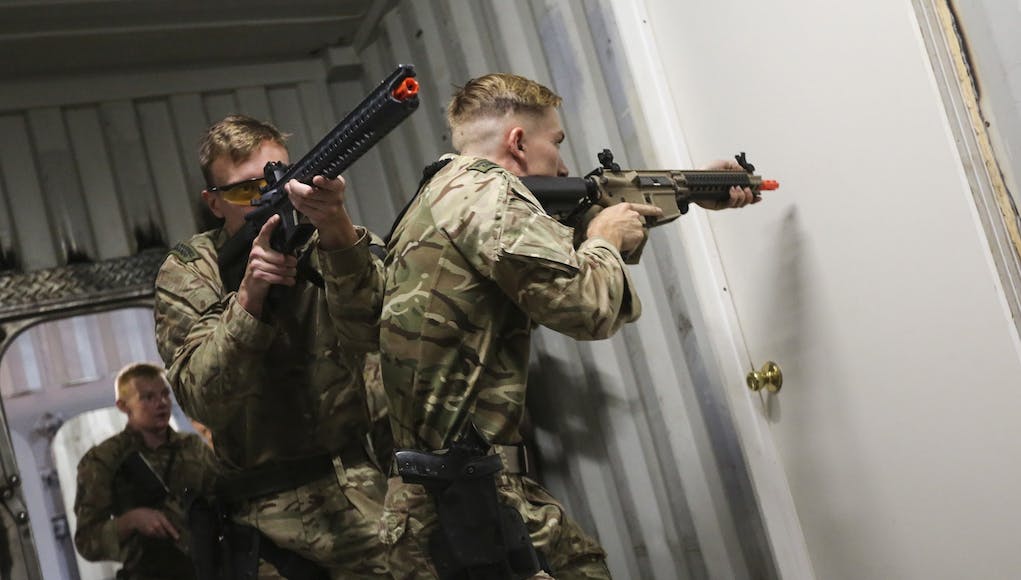 42 Commando have been perfecting their board and search/protection skills alongside the US Marines equivalent, FASTCENT, say the Ministry of Defence.

FASTCENT – Fleet Anti-terrorism Security Team Central Command – marines are responsible for providing security at US embassies, consulates and other key US Government sites in the Middle East, and also deploy when needed to tackle terrorist activity.

According to a news release, the Americans invited the Protection Team from 42 Commando – currently attached to support ship RFA Cardigan Bay – to make use of dedicated training facilities in Bahrain.

“As part of a shake-up of the Royal Marines, 42 Commando have assumed the protection of British warships and auxiliaries mantle from 43 Commando in Faslane – allowing the latter to concentrate on safeguarding the UK’s nuclear deterrent.

Various mock-ups of ships, containers and compartments such as the ‘ship in a box’ facility at HMS Raleigh in Cornwall are used to train sailors and commandos assigned to VBSS – Visit, Board, Search and Seize – duties.”

It’s the task of protection teams to secure a suspicious vessel, allowing a Royal Navy boarding team to conduct the search part of board and search in safety.

I mentioned this in an earlier thread.

3 Commando “brigade” is a brigade in name only now, with just 2 Commandos, one of which is at readiness to deploy as part of the ARG.

Fine as spearhead troops for rapid reaction but if they are required in crisis they should really be beefed up again with at least 3 manouvere units each, plus associated enablers.

43 Commando has itself been reduced, and some roles taken from it as the article says. So no expansion there either.

In the event of a conflict my guess would be that 3 Commando and 16 Air Assault would operate together much like they did in the Falklands (even if it wasn’t 16 Air Assault back then you still catch my drift).

This was proposed in the previous SDSR, the effective merging of the two brigades. As expected, the idea went down like a lead balloon. If the will was there both Brigades could be brought up to establishment. 16 AA has had a RGR Battalion put with it but now lacks sufficient artillery, engineers and logistics to support 2 battalions. These were cut previously. 1 Rifles at Chepstow were attached to 3 Commando for years in Amphibs role too. The army has Light Infantry battalions available. Recent Roulements to Helmend of Army Brigades involved brigades having units not usually on strength… Read more »

What exactly happened to 43 Commando, if you don’t mind explaining?

It was reduced in the “pass the parcel” and “musical chairs” merry go round of individual squadrons and companies being amalgamated, cut, or transferred between organisations as 42 Commando moved from being a standard deployable Commando to the Maritime Ops role.

My info may be incorrect but I currently have 42 having –

43 Commando now only has

I just wanted to say after a career as a US Marine much of that in ANGLICO that British Royal Marines were IMHO The most professional group I had the pleasure of working with- over the years I made many good friends and besides the USMC- British Royal Marines are THE unit I’d go down range again over all others.

England has to be proud.

What weapons are they carrying?

They are airsoft rifles

Airsoft is absolutely perfect for this kind of training…

INTERNATIONAL DEFENCE CONFERENCE Government, Industries and academia should work close together to bring about solutions to the challenges facing mankind. The conference is designed to bring thought leaders, policy makers, influencers, researchers and futurists under one roof in Abu Dhabi to debate and share ideas related to technological advancement and disruptive technologies. This conference marks the first time that two of the region’s signature and most well-attended events—the Abu Dhabi International Offset Conference (ADIOC) and the IDEX Conference—will be combined into a single “must attend” event for Defence, security, academic communities and companies operating in the region and internationally. The… Read more »

I agree with Daniele about the loss of capability. We had two very good quick reaction brigades, both self-contained and well able to give a good account of themselves in any theatre or on any battlefield. Both have been reduced to demi-brigades, with the loss of 42 CDO to the maritime boarding role and 1 PARA to the training/Special Forces role, along with a reduction in artillery, engineers etc. It is just another cost-cutting trick by the back door, we can pretend to have 2 brigades but actually it’s the equivalent of one. The most audacious cut, which almost no-one… Read more »

Spot on with the infantry battalions RC. They are known as “Defence Engagement Battalions”