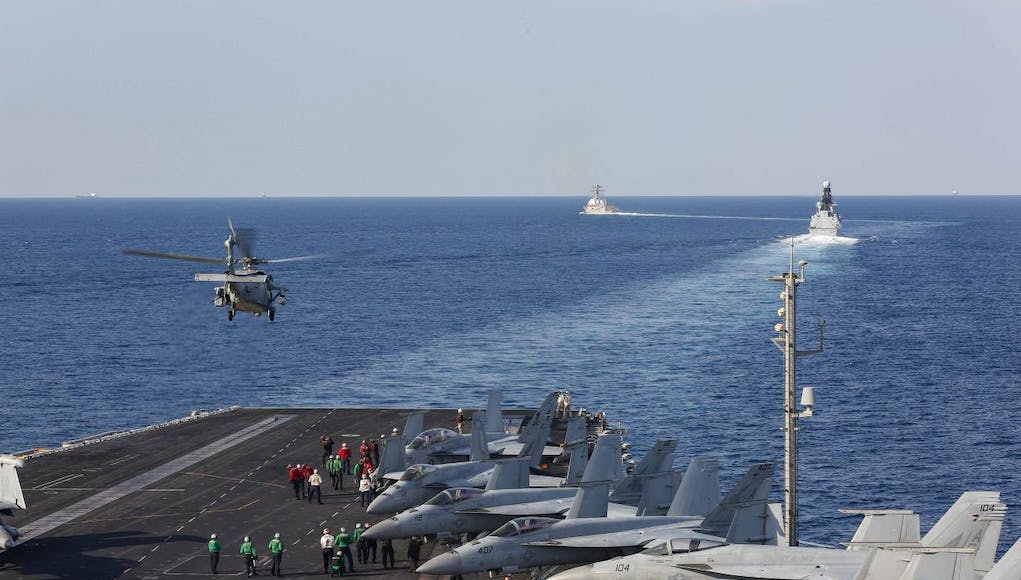 The Abraham Lincoln Carrier Strike Group completed a scheduled transit through the Strait of Hormuz and into the Arabian Gulf, say the US Navy.

The Strait of Hormuz is one of the busiest and most dangerous shipping lanes in the world, with one-fifth of the world’s energy supply transiting the strait annually. This waterway is critical to ensuring and safeguarding the stability of global commerce.

“Especially in evolutions like a Strait transit, where detailed planning, precision navigation and the proficiency of our warfighting teams are on full display.”

The Carrier Strike Group’s presence in the U.S. 5th Fleet area of operations since May demonstrates the United States’ and its regional partners’ commitment to the free flow of commerce, regional maritime security and freedom of navigation.

“We place ourselves where we need to be, when we need to be there, in order to meet the full range of maritime security requirements of the mission at hand.”

The U.S. 5th Fleet area of operation encompasses about 2.5 million square miles of water and includes the Arabian Gulf, Gulf of Oman, Red Sea and parts of the Indian Ocean. The expanse comprises 20 countries and includes three critical choke points at the Strait of Hormuz, the Suez Canal and the Strait of Bab al Mandeb at the southern tip of Yemen.

The US Navy say that the Carrier Strike Group. is deployed to the U.S. 5th Fleet area of operations in support of naval operations to ensure maritime stability and security in the Central Region, connecting the Mediterranean and the Pacific through the western Indian Ocean and three strategic choke points.

Looks like a T45 transiting ahead? Will she be on a tasking separate to the US carrier group and just joining in the transit?

That’s HMS Defender, returning to the Gulf after visiting Goa, India. Likely just joining the transit to return to UK operations, but I wouldn’t be surprised if she joins the group. OPSEC means that a lot of information about UK operations is limited to the occasional press release.

Just a side note/question on the Type 45s. Are/will they ever get the Mk41 VLS? Does anyone have any insight/clues? It would be a real shame if these weren’t fitted at some point, especially as the Type 26 is getting them. Surely this would drive costs down for procurement, maintenance, weapon stocks, etc.,? I just hope FFBNW doesn’t turn into ‘Fitted For But Never With’…..

David – not likely at this time I’d guess, hopefully they will get a Harpoon replacement when an interim ASM is chosen but anything more is hard to say.I might be right in saying that any funds for upgrading the T45’s was allocated to the Engine Upgrade work.

i hope dragonfire works, it’s time we had some information on it

Yes after someone asked the same question a month back and considering it was reported earlier that testing would be carried out by year end, I tried to find some sort of update but absolutely nothing new came up unfortunately.

Should choose NSM, then they can be loaded into canisters and bolted onto the deck: cheaper option to easily give each T45 8 decent anti-ship missiles.

8 isn’t much but better than none.

I agree Steve but sadly, I feel it will never happen. Apparently the Navy is looking at an interim buy of ASMs post-Harpoon as a stop gap to Perseus. However, only 5 ship-kits will be bought and added to 5 Type 23s with the thought they be cross-decked to the 5 Type 31s when they come online. No mention of anything for the Type 45s. I get the feeling that since the Type 45s are identified as ‘Air Defence Destroyers’ this is somehow used as an excuse to ignore fitting the ASMs. British Treasury penny-pinching….. design, develop and build ships… Read more »

“…Design, develop and build ships with tremendous potential and then hamstring them by fitting the absolute bare minimum you can get away with.” Seems to be the theme of our defence policy, that. Type 45s with no offensive armament, carriers with minimal air wings, that we also cannot equip with ASM at the moment. Seems we are pinning all our ASM hopes on the one or two (if we’re lucky!) Astutes escorting our fleet during wartime. What if on is sunk, or damaged, or simply lured away or distracted? We lost any chance to hit an enemy ship that more… Read more »

Well said Steve but I fear nothing will change and we will continue to penny-pinch at every opportunity only to have it bite us in the arse when the shooting starts! – which it inevitably will at some point. Sadly it’ll be too late then; the shame of it all is that it doesn’t have to be like that….

Could NSM, were that the interim missile chosen, not work in the existing quad canister Harpoon launchers on the T23s, or does it have to be a brand new launcher? Surely that would save money if we bought 5 kits on top of whatever we currently have?

WILL THE ARCHERS EVER GET THE 20MM CANNON THEY WERE DESIGNED TO CARRY? FITTED FOR BUT NOT WITH IS TOO OFT A PHRASE USED WHICH TRANSLATED MEANS …NO

Don’t know, though I remember last year the navy making a big thing of the Americans apparently requesting a type 45 to accompany their Carrier Task Force though the Straits due to supposedly their air surveillance capabilities. Whether that was pure wishful thinking on their part or has substance is difficult to decipher from the outside, or of course in light of this previous instance, whether it has any relevance to the latest transit.

A US Carrier Task Force would be accompanied by a Ticonderoga class guided missile cruiser and probably two Arleigh Burke AEGIS destroyers to complement the four EC-2 C/D s that are stationed on each Nimitz carrier. What capability would a Type 45 destroyer add that wasn’t already in the Carrier Task Force?

Exactly…… our Type 45s are fantastic but the Arleigh Burke’s are no slouches themselves; very capable platforms and the US has plenty of them.

Agreed – the Capability increase is more Political rather than Material.

now THAT’S A CARRIER GROUP, NOT A COUPLE OF FRIGATES AN A DESTROYER

And your point is?

the admiralty statement stating a u.k group would consist of two destroyer, two frigates, a nuclear submarine and a support ship, seems to to be a little light in the ability to prosecute the long range cruise missile barrage,that is the precursor in modern warfare, maybe a ticonderoga(freshly retired) might fit the bill. i’d rather all R.N WARSHIPS WERE TOMAHAWK CAPABLE

Tomahawk is Not stealthly, a lot get shot down, which will become increasingly so in the future.
Any adversary will see ships armed with Tomahawk, and prepare their air defences.
A lot harder to prepare in the case of submarines.

By all accounts we don’t have the missile stocks anyway to mount a barrage. We have precious few Tomahawks from what I understand.

The TLAM is a land attack weapon, and not for taking out cruise missiles. A QE class with 2 x T45’s and 2 x T23’s and Astute plus the RFA support, represents an incredibly capable carrier strike package, that only the Americans can match, knobody else can come close. And I would seriously doubt the capability of foreign hypersonic weapons, they might hit Greenland with one. Maybe.

Babcock outline job losses in the event of independence