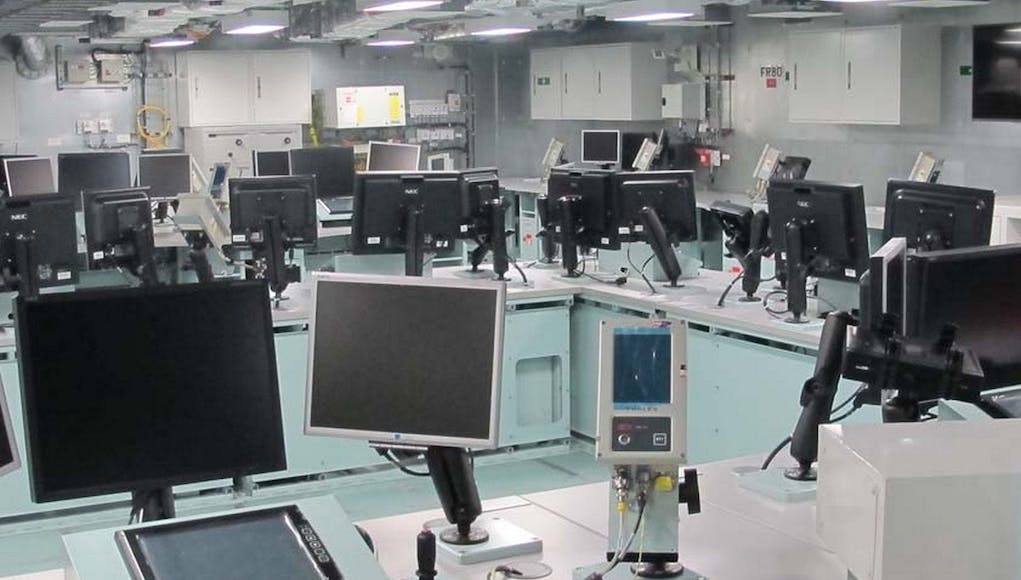 The operations room will watch for threats, track the movements of the carrier’s F-35B Lightning jets and Merlin helicopters and direct missions as varied as intercepting hostile aircraft, to striking targets on land or delivering humanitarian aid in a disaster zone say the Royal Navy.

“Working hand-in-hand with Royal Navy experts, engineers and technicians from the Aircraft Carrier Alliance have toiled to ensure that all the equipment and cabling is in place and, most importantly, that the computer systems ‘talk’ to each other so the masses of data coming into the ship from her own sensors such as her radar, as well as information from her aircraft and other ships in the task group, or friendly forces ashore, can be meshed together accurately for operators to understand clearly… so the command team can make key decisions in good time.”

“This milestone represents the heart of the warfare fighting elements of the ship coming to fruition. The Warfare Department now has its sights firmly set on preparing the ship and team as more and more systems are brought online.”

Handing the compartment over to the ship’s company was production manager David Scott, “The operations complex has been over three years in the making for me – and much longer for others,” he explained.

“We had some of the best workforce available to us and with the team taking ownership of the area, we are able to deliver the compartments ahead of time and to a much higher standard than that previously achieved. This demonstrates to all that we can step up to the toughest challenges on this project and that’s credit to all those who have supported me.”

More than 3,000 compartments have to be signed off before the carrier leaves her berth at Rosyth to undergo sea trials next year.

Brilliant news, at this rate of going PoW will be conducting sea trials earlier than expected. I suppose being the second in class a lot of production lessons have been learned thus speeding up the process. This team needs to be kept together for the next large ships the Navy needs such as the Solid Support ships or even an Ocean replacement.
Well done to the Aircraft Carrier Alliance and all those involved in producing this marvellous ship.

i’d have hoped that alongside work and fitting out would be further down the line by now and that she’d be at sea. i’m looking forward to a picture of both carriers at sea together

Once more we see UK engineering and innovation at the forefront of cutting edge defence technology being delivered ahead of project schedule. Fantastic news and let’s hope this along with QE striding ahead puts a sock in the mouth of negative media rubbish. MOD must get ahead with quality PR!
Great stuff and great for the UK.

Agree, so much for the lie that British shipbuilding is always late.

Whilst this is undoubtedly great news I am a bit underwhelmed by the photo of the ops room. Given where technology is nowadays there should be a lot more big screens and smart consoles and a better fit out. I am sure it all works well but as the flagship of our navy this ops room should really look futuristic. Having been in a number of non military command centres through the years I can tell you that this setup at first glance looks dated. I know budget is tight etc, but a 100” OLED tv comes in at around… Read more »

Money can always be found if we start looking in the right places!

“Pentagon spokesman Lt Col Koné Faulkner said the US military would aim to spend the money on other “urgent priorities”.

If you were to off any of the persons in the photo that heads that article a US passport they wouldn’t say no……….

Looking at the layout it is similar to an LPD set up, which makes me think that this is the ops room for the embarked forces , not the “fight the ship” ops room.
Embarked forces use a lot of CSS displays and radio links to talk and organise the people on the ground. You don’t need radar, you don’t need EW etc for that. It’s mostly map overlay graphics , email and data.
The ships ops room with radar, link, ew displays will look very different.

@Pacman27: The truth of the matter is that ‘combat capable’ touch screens are just not as robust as the older analogue input systems (keyboard and mouse). Even though touch screens have come a long ways in the last 15 years, they still develop issues when subjected to impact and use over time. (It’s evident when you consider that a new touch screen phone responds/works better than one which is just a few years old. And a phone screen is less than 7″ wide) Touch screens and LED TV’s just aren’t able to pass all the military requirements for hardware going… Read more »

It all looks a bit flimsy to me lets hope it is all mounted on resilient mounts,because if it isn’t it will not last five minutes in a real war situation.

I was wondering whether those monitor mounts have any sort of gas piston or similar inside to absorb shock. They seem fat enough (big diameter) to incorporate something like that. It is interesting to note the “all around a conference table” layout of the stations whereas pictures of other ops rooms that I’ve seen tend to have less of the everyone-looking-at-each-other think going on, e.g. all stations facing forwards or at the walls. That might well support Gunbuster’s suggestion that this is actually the embarked forces ops room rather than the main ship’s ops room. Maybe here’s a good example… Read more »

Yes, the OPs room has three large screens just out of camera shot. I believe they are 43″, though I might be wrong. The ships control centre was handed over in July, and that also utilises large display screens, as does the flight deck itself. @QEClassCarriers onTwitter has some good photos of both ships.

Both being handed over early really does go to show that the lessons learnt from QE have really sped up the construction process of POW.

Sod the widescreen TVs, they should be fitting a catapult and converting some Typhoons to use arrester hooks. 🙂

Well said Colin lol ? and maybe some artificial snow on the ski ramp ?

If I suggested that again….

Colin Brooks. At what point are you and others going to let it go ? The F35 is a generation ahead of the Typhoon and both Carriers are equipped to operate them. What next should we scrap the orders for Tornado and buy the F111 instead !

Why? So we can have a less capable aircraft flying from our carriers that will cost a fortune to convert into carrier capable aircraft , huge development costs , and waste another couple of billions to fit catapults and arrested gear, plus a huge training burden cost, wasted billions already spent on the F35, and put carrier strike back by another 5-6 years, at the very least. Yeah. Great idea.

The F35B will not be fully combational operational until 2025 at the earliest and Typhoon only requires traps anyway. As for less capable? Far more weapons carried, far greater distance covered, air superiority fighter ect. ect. But we know its not going to happen and cats and traps are going to be fitted at some point down the line.

“One of the “Category 1” deficiencies is the pilot’s helmet-mounted display, which emits a dim green hue and can “decrease the pilot’s ability to detect visual cues.” A fix is in development, but until then pilots landing on ships at night are placed under safety restrictions.”
https://www.popularmechanics.com/military/aviation/a21098498/f-35-problems-fix-before-production/

All this talk of big screens, does Windows 2000 even have the necessary drivers for 4k or even 4k Ready? That’s the question.

No need to rush then!

“In June, four of the jets made the trip from U.S. Marine Corps Air Station Beaufort, South Carolina, to be permanently stationed in the U.K. Another five crossed the Atlantic this month. The U.K. plans to buy nearly 50 of the fifth-generation stealth fighter over the next decade.”

I agree with Pacman27, it looks decidedly underwhelming.

i will admit to being unimpressed by the photos, although then again, i have probably been slightly desensitized as to what my idea of an ops room should be thanks to multiple films and anime…. basically unless its all massive screens and holographic projections it just doesn’t seem right….

not forgetting the obligatory awesome sound effects when the holograms initialize ;p

I blame Sir Ken Adam. Ken Adam flew in the R.A.F. during the Second World War. He was an Austrian Jew so would have been in a tighter spot than some others had he been downed and captured … Post war he went into films and designed the infamous War Room for Stanley Kubrick’s ‘Dr Strangelove’. The story goes (I have no idea if it’s true but I live in hope) that on his inauguration Ronald Reagan asked to be shown the ‘War Room’. “That was movie, Mr President.” I think Ron was bit disappointed. Meanwhile let us talk down… Read more »

It looks like an old ops support room from 2000. I thought this ship was new?

When a U.S. code breaker arrived at Bletchley Park he was amazed to find the reference library of Enigma de-codes was kept in cardboard shoe boxes on trestle tables. “In Washington they have huge rooms full of metal filing cabinets with nothing in them.”

Then again. Maybe this is a still designed to deceive?

It’s the standard RN duck blue cabinets that do it. They are built to contain and protect the equipment not look sexy for photo ops. It’s what’s in them that counts.
An OLED TV is great but in a heavy seaway with a bit of G acceleration as you go down into a trough and slam at the bottom its not much good when the civilian standard connectors and components shake loose and the screen cracks. Hence the rather large blue boxes everything gets put inside.

They could at least have got the edges of the display screens the same colour, mixing black and silver next to each other, that’s what the cheap ass IT it department do where I work and it’s irritating.

At least they don’t have white cables going into black-cased monitors, that’s another one that bugs me. Same for black cables into white-cased equipment.

Each of the stations seem to have two monitors and a white box thing with either a touch area or a much smaller display area (or both) on them plus two cables (one of them black … grrrrrr) running running into the bottom of each. What are those “white box things” e.g. the one to the right of the black and silver monitor in the main picture?

I believe that most of the modern control rooms have multiple mission stations or some other name. It means that anyone can use any station for anything, they just have to log in / load up the right interface. It could be some find of card reader / security ID unit for that? It doesn’t look big enough for much else…

what air defence systems, (apart from the F35), do they have?

Here’s the big screens everyone wants to see.. 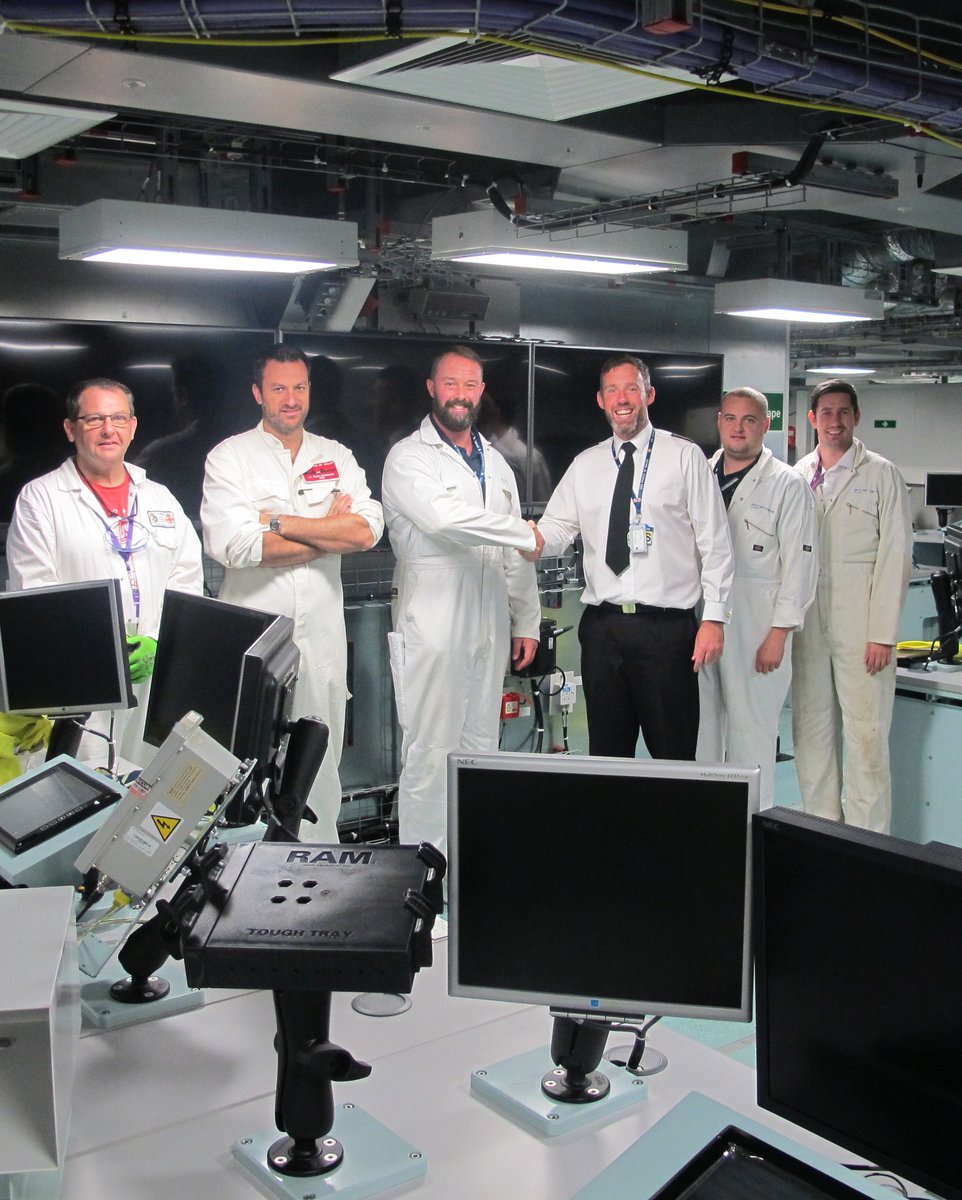