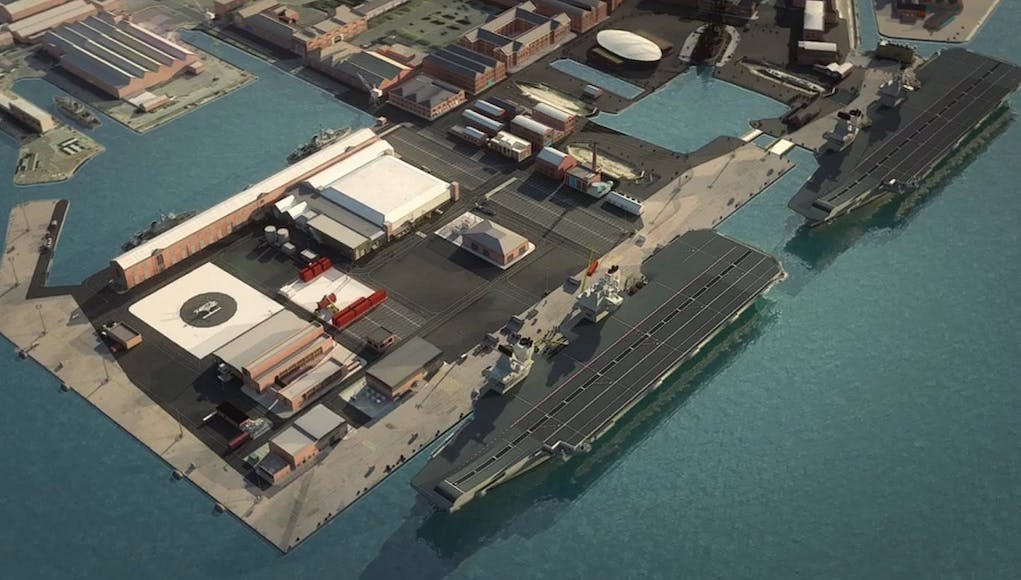 A new centre containing facilities to support the new aircraft carriers is nearing completion at Portsmouth Naval Base.

According to BAE, The Queen Elizabeth Class Centre of Specialisation will cover an area of 70,000 square metres – approximately the size of 10 football pitches.  It will include a 7,000 square metre Forward Support Centre able to hold 15,000 pallets of medical, mail and naval stores under one roof, a café seating more than 500 people at any one time and a reception centre for all those working on or visiting the carriers.

“At 70,000 tonnes the new carriers are the largest and most complex naval ships built in the UK. It’s essential that they have high quality facilities and highly skilled people to support them.
This centre will be the home not just for the carriers; it will also be home for the military and civilian people who support them. With improvements to the jetty and construction of a high voltage power station already in its final stages, you can now see that we are well on the way to being ready for HMS Queen Elizabeth’s arrival next year.”

“The work on the Queen Elizabeth Class centre is yet another tangible milestone in getting the Naval Base ready to support our new aircraft carriers. A huge amount of activity is in train ashore and in the harbour to make sure we are ready to receive HMS Queen Elizabeth.
These are exciting times for the Naval Base and the wider Portsmouth area as we prepare for these huge ships which have secured the future of the base for the rest of the century.
BAE Systems is working in partnership with the Royal Navy under the Team Portsmouth banner to improve the QE Class Ships’ Company experience that the carrier’s crew will receive at the waterfront and provide the resources, information, material and facilities they will need in Portsmouth and on operations around the world.”

The picture seems fitting, 2 carriers with no aircraft.

Ok, let’s hope we don’t get to the point of both launching without.

“The picture seems fitting, 2 carriers with no aircraft.”

They’re there. You’re forgetting that the F-35 is a stealth aircraft 🙂

This would be the best answer ever, if the policticans use it when the carrier launches with no planes ready.

Carriers don’t usually berth in their home port with their full compliment of aviation, just saying 😛

Quite right. In fact, even calling them “their” aircraft is problematic. Planes operate as air wings, and an air wing can be stationed on one carrier or the other.

It always amuses me when people talk about “carriers with no planes” as if planes are built in shipyards on the decks of the ships.

Sigh. The posts about “no aircraft” are wearing thin to the point of stupidity. Please educate yourself on the facts before bothering to perpetuate such moronic nonsense.

Delighted that things appear to be progressing well.
Is there an update on the Sea King ASaC7 replacement? The ‘Crowsnest’ programme seems a little quiet on the development front.

Looking good. Looking forward to the first time they are both berthed together like that.