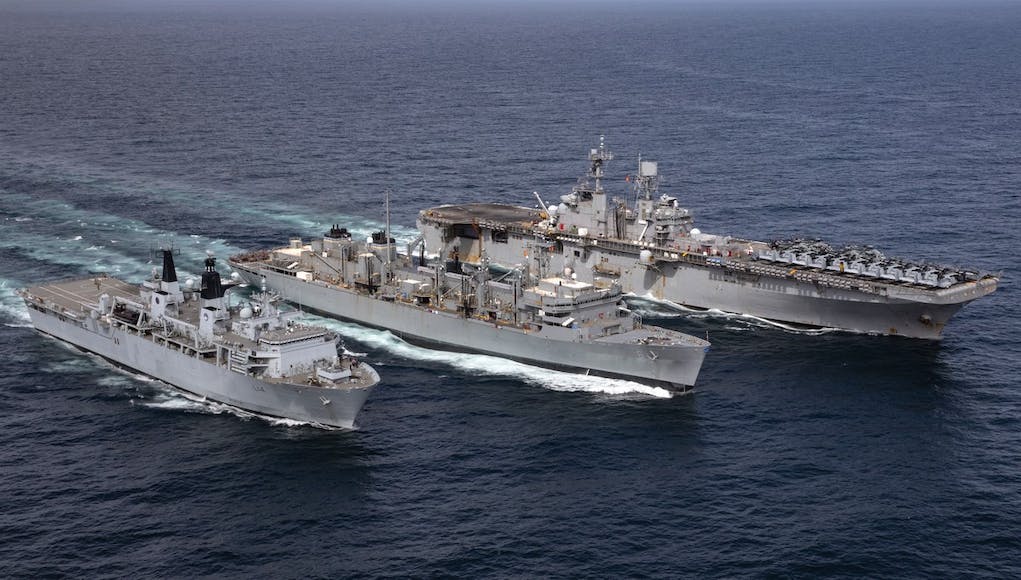 Iwo Jima is operating in the Atlantic Ocean with Amphibious Squadron 4 and the 24th Marine Expeditionary Unit (24th MEU) as part of the Iwo Jima Amphibious Ready Group.

Albion is leading the Littoral Response Group (North) task group to the Baltic Sea. The task force is made up of amphibious assault ship HMS Albion and landing dock RFA Mounts Bay, plus Type 23 frigate HMS Lancaster, Wildcat helicopters from 847 Naval Air Squadron, and Royal Marines from 45 and 30 Commando.

Great you see all – thank you for your service 🇬🇧👍🇺🇸 pic.twitter.com/y0TlzVNrwW

LRG(N) will undertake focused training and operations with NATO allies and regional partners and provide a contingent capability in a vital region for European security. The deployment will also undertake a range of experimentation and innovation trials that support the development of Littoral Strike and Commando Forces and the Royal Navy’s Transformation strategy.”

According to the Royal Navy, more than 1,000 sailors and Royal Marines are heading on the three-month mission to the North Atlantic and Baltic.

I really would like to see an announcement for Albion/Bulwark replacements. Their out of service dates are coming round quicker than we think. We really need to get cracking with the design work. Maybe we could take an off the shelf design and make some small modifications. Something like the Canberra LPH. I know others have criticised the idea on here before but I would like to see some F35 capability on the next LPHs. 8 F35s plus, chinooks and Merlin is a potent force. We cannot risk the carriers for offensive landings and we are stupid to have even… Read more »

Roy
Reply to  Order of the Ditch

It seems the decision has been made, de facto, to replace them with the multi-role support ships. There does not appear to be any policy authority to do anything else, at least until the next defence review in the middle of the decade.

Steve R
Reply to  Order of the Ditch

There’s no point in putting F35 capability on the next LPHs as we will have so few. They’ll be needed on the carriers.

Makes more sense to invest in drones for both A2A refuelling and AEW as per the Royal Navy’s announcement that that’s what they intended to do. Extends the range of the F35s so that they can support an offensive landing without bringing the carriers in too close.

Yes Steve, too few! A2A only if it proves possible with drones. I recall a Vulcan pilot describing A2A refuelling over the South Atlantic, as trying to slip a piece of wet limp spaghetti, up the rear end of an angry tom cat. In complete darkness! By all accounts, it’s a difficult manoeuvre for human operators. I know things have advanced since then but it’s still dangerous and drones are unthinking machines, the best being remotely operated. The USMC have demonstrated that fast jets can refuel from converted MV22 Osprey. They even posted the videos on YouTube. I suppose the… Read more »

Sonik
Reply to  Order of the Ditch

I agree with Roy and Steve. It’s buried in various documents but if you pull it all together it’s clear the intention is to replace Albions, Bays and Argus with 6x MRSS, which will also cover the LSS raiding concept. If it’s something like Ellida it will be a like for like replacement it terms of total lane meters, landing craft etc. but each ship will include all capabilities (well dock, aviation, hospital, C&C) so overall a more balanced fleet (i.e. 6 identical ships instead of big/small mix). It has been mentioned that the thinking is “larger number of smaller… Read more »

George Parker
Reply to  Order of the Ditch

F35B capability on LPH should be a “no brainer.” As flexibility is one of the new buzz words.

My main regret is that none of the UKs Amphibs have a helicopter hanger. Albion and Bulwark are good ships, so are the Bay class but they could be much better if they could have a hanger say for 4 Merlins.

Yes. I wonder though that with air being free and steel being cheap would it be a huge job to construct a permanent hangar arrangement, even for just 2 or 3 helicopters. Not enough helicopters in the fleet I know, but it would help.

With modern technology I wonder sometimes if we could go back to a class of ship that was tried in the 1960s-70s the helicopter cruiser. Some countries tried this the RN with the converted Tiger class cruiser, the Russians with the Moskva class and the Itallians who seemed to have the best designs in the Vittorio Veneto class or Andrea Dorria class. If we could take say the VV or AD class and give her a stern ramp for say four CB-90s then we would have a good all round multi role combat ship. It seems to me that from… Read more »

I know this is probably veering into the realms of fantasy fleet, but something like a development of the Danish Absolom class, a T31 at the front, weapons, sensors etc the same, but with an extended flight deck, larger hangar and a well deck for marines/craft/vehicles. It would have the advantage of fulfilling a LSS role, a patrol role and an aviation support role also.

I think this idea has surfaced before and is well worth exploring. Something along these lines could be a very effective (and cost-effective) platform. Seems to fit with the developing modus operandi of the RM. Just because we have relied on LPDs, commando carriers etc. in the past does not mean they are right for the future.

Not fantasy the Absalon could be the logical choice for the T32. The T31is based on the hull of the Iver Huitfeldt-class frigates which is a development of the Absalon class. So we could reverse the concept and build a Absalon type as the T32 based on the T31.

One of the Bays will get a hangar on an interim basis and the multi-role ships should have a limited capacity as well. Bur the clear intent is that the bulk of that capability will have to be carried by the Queen Elizabeth class. They should have plenty of helicopter space since total F-35 numbers will be much smaller than originally anticipated.

Roy, I understand the intended use of the carriers, but you do not get a 70,000 ton attack carrier close to shore. They become a sitting target. Amphibs are shallow draught vessels carriers are not. Amphibs are good in manouver carriers are not. CVFs are not good assault ships, they can give distant cover. The place for the QE carriers is the deep blue ocean or 100 miles of shore giving cover, anything under 50 miles and the carrier is at risk. So I will say it again either we need to build dedicated helicopter assault ships or a multi… Read more »

Agree Ron. If you are using your fleet carrier as LHP then it isn’t being a fleet carrier and you will need to put it at much greater risk. Now ideally the RN would get two LHDs (like the Mistral or Canberra classes) to replace the Albion / Bulwark capability but I fear there simply isn’t the money for that. What we can afford and should probably get are several mini LHDs (LSS) that can deploy LCAC, LCVP (from davits) and deploy a couple of Chinooks & 2 light helicopters too.These ships will replace the Bays, Argus & the Albions… Read more »

Don’t disagree with the need for better amphibious units given RN requirements. But the policy review has moved in a different direction as Rob notes: the main realities are fewer F-35s and only limited capacity multi-role vessels. Those decisions mean that aviation of all kinds will have to deploy from the two carriers. It is logically inconsistent since an argument for the multi-role vessels is supposedly “more but smaller”. Yet, for aviation, nearly everything will be on a large and vulnerable platform.

Rob, I have often said that the ideal solution for the RN Amphibs would be two Canberra’s and four Ellida’s. Combine these with the T31 and T32 and you have an independent Amphibious Battle Group able to land two armoured battle groups any where in the world with its own air support. The carrier groups are then free to operate where they should in the deep blue waters of the Oceans. I know we are moving away from large scale Royal Marine landings, and I agree with that. The Canberras are not for the Royal Marines but the Army. I… Read more » 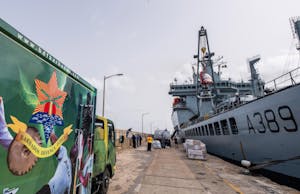 June 12, 2021
Naval tanker RFA Wave Knight has delivered 75 tonnes of aid to Commonwealth citizens in the aftermath of a volcano, say the Royal Navy.