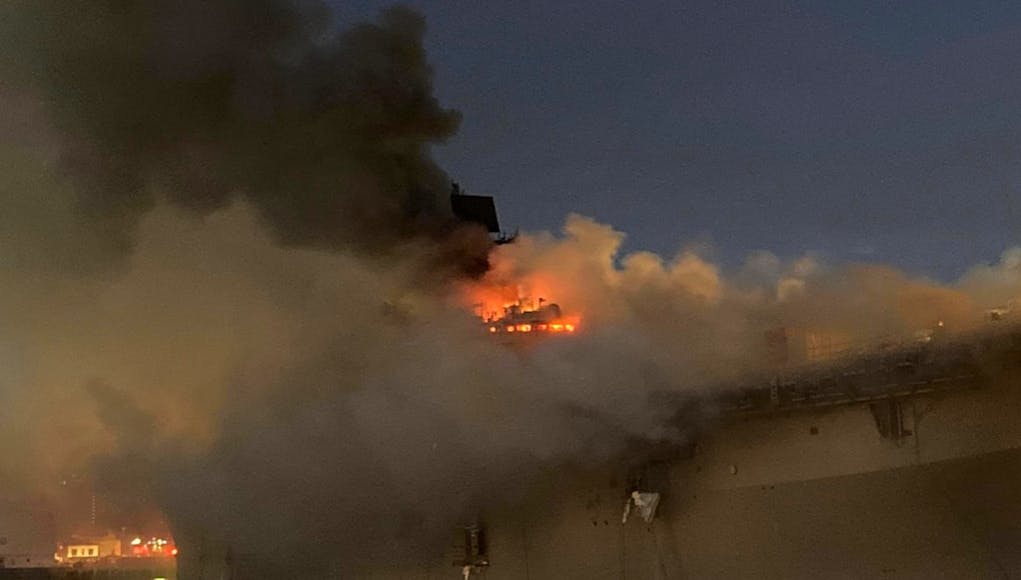 An explosion has occurred onboard the Bonhomme Richard while in her home port at Naval Base San Diego undergoing maintenance, resulting in a significant fire. Seventeen sailors and four civilians were taken to the hospital with non-life threatening injuries.

According to NBC News, a three-alarm fire on the USS Bonhomme Richard was reported at 8:51 a.m. San Diego is the ship’s homeport.

She’s a complete loss , fire started below sea level and none of her own gear operational to fight them , cannot believe it in this day and age .to lose a complete Hull .

Not sure it’s a complete loss? According to USA today the fire broke out on the vehicle deck. Whilst the Military Network have a statement from Rear Adm. Philip Sobeck, commander of Expeditionary Strike Group 3, who stated to reporters, the fire started in the Deep V lower cargo area. This is a long storage area that holds Marine Corps trucks, tanks, humvees and other vehicles during deployments. There is a ramp down to the well deck from the cargo area where vehicles can be loaded onto LCUs and LCACs, and also a ramp up to the flight deck where… Read more »

Half the ship is gone now after two days ablaze, how deep were her moorings? would it not have been more efficient to flood her to extinguish the fire as the wiring was a total writeoff quite quickly.

Smoke from fires always make them look far worse than they are. Key thing is to put it out, then assess the damage. In this day and age this should not be happening!

There seems to have been a spate of these in the last year or so, and they always happen alongside during maintainence or build. There was the Russian carrier, a Chinese LPH, the French submarine,and now this.

Wonder if the simple absence of large numbers of personnel on board simply allows fires to catch and spread more freely before anyone reacts.

Also can’t help wondering, just wondering, if there might be a little more to this. I guess it’s much easier to sabotage a ship alongside in port than at sea. Seems to be happening rather alot recently.

I think it’s more that people at sea are more aware of the fact that a ship is both a home & a workplace. If you risk either while at sea, you may not survive. The matelot ashore will dive in with an angle grinder without thought.

As stated in the article all of the ships systems were down – so there probably was no fire main and the fire alarm/warning system was probably also down. Also it is likely that all of the compartment doors were wide open and you don’t necessarily have a crew, or means to communicate with a crew drilled to dog down the ship. Add to that cables/gas lines/flammable stuff brought on board by the shore teams etc going through the compartment doors and you have a very different place of work to a stripped down naval ship ready for combat/damage control.… Read more »

Could be sabotage as you suggest, or simply when at dock for refit, it is not uncommon to have fires with welding etc… i think it’s just an unfortunate accident. – – – – happens 😉
Anyway the navy will know more since they will investigate the cause of the fire and will be able to determine if it was arson or not 😉

Yes I thought this might be revenge for damage the China ship.

I agree, it sounds a bit like sabotage!! Were there any marine vehicles on board during a ships maintenance? Chinese consulate in Houston closed, why? A ship should not be lost alongside, even if the response was a bit chaotic. It seems that fire marshalls were in place but there was an explosion and several were injured.

The fire has now intensified and engulfed the island superstructure causing fittings to melt with a main mast now actually leaning forward at an angle. Seahawk helicopters are now being used to drop water via bambi buckets. This vessel could now be a right off with intense fires burning in key mission spaces.

It’s not looking good… There may have to be an acceleration in the build of LHA 9… Just redone as well. Sort of another Victorious fire and writeoff…

One thing is for sure, someone is in a lot of trouble. Imagine being responsible for the loss of a $1.5 billion aircraft carrier.

When a USN vessel undergoes a maintenance period with a contractor the work is covered by NAVSEA STANDARD ITEMS https://www.navsea.navy.mil/Portals/103/Documents/SSRAC/NSI/FY21/FY%2021%20CH%203/FY21%20CH-3%20NAVSEA%20Standard%20Items%2011JUL2020%20pkg.pdf?ver=2020-07-11-150146-417 009-08 and 009-07 cover housekeeping and fire prevention. It details all the good things you must do to ensure that you have adequate fire cover. It looks as if in this case there was a monumental failure of Safety Inspections and Fire Safety Inspections and precautions all of which are mandated. Things like having cables and pipework through doors…they must have dis connectors withing 6 feet so you can break the cable and close the door. Extinguishers onboard at various… Read more »

If this was a command and contractor failure (which I’m leaning towards) then the captain of that ship may just as well do the General Jack Ripper and save the Navy the trouble.Because they will be out for BLOOD. If not, then I can imagine a couple of disturbing causality possibilities.

Agreed – for some reason I didn’t see you post before I wrote my one!

Maybe it is the phantom posting delay….

Latest reports state the forward part of the island and mast have collapsed and the ship is listing to starboard (possibly because of the huge amounts of water being pumped into the her. San Diego Fire Department have said they expect the fire will burn for days.

I bet the Office at NCIS is busy watching

Could one of our aircraft carries be called into action to fill the gap left by this fire ?

The latest… I think she’s a writeoff…

It’s scary how large the fire got and how quickly it spread amongst the ship. But I guess if lots of maintenance was being carried out and she had only a skeleton crew, the majority of hatches would have been open, thus speeding up the fire?

Glad those involved we able to get off the ship before it got too bad.

This is a major loss, it means the USN will have to take another LHD out of service to do the modifications for it to operate the F35B, rearrange deployment schedules for the whole class. I believe the Peleliu is still in Class B storage at Pearl. They might consider reactivating it to fill a gaping hole but it would have to be a pretty big crisis. LHA 9 which is only now starting build should be accelerated as well. All in all a very bad situation.

Sorry to see this happen Helions. It’s never nice to see a ship burn, especially an ally’s. Norwegian frigate lost in collision, French submarine badly damaged by fire. Now this. Not good. Fortunately nobody died. Wish the USN all the best for a fast recovery of capability. All the best

Thank you Richard. It’s a shame isn’t it. Still burning too…

At least the Tripoli is officially part of the fleet and requires no mods to operates the B’s.

She was delayed too. They had better speed up Bougainville and LHA 9.

Good its finally under control and out, sad to see a loss of a ship.

Really, really sad to see the loss of a US/NATO asset.

Makes getting the QECs online even more essential.

A very clear reason for why you need a little bit of depth in your fleet. Even something routine as refit can cause a loss, and as seen with endurance you never know when an incident will render a ship scrap. That’s even before they go into harms way.

As an aside maintenance is known to increase risk of fire and you are sort of meant to have a risk management plan in place. I suspect when the smoke settles a few careers will come to grinding halts.

You couldnt make it up. The yard which started the fire has been posthumously awarded a $10m contract to put out the fire and cleaning up the debris.

Oh no what a shame 😂