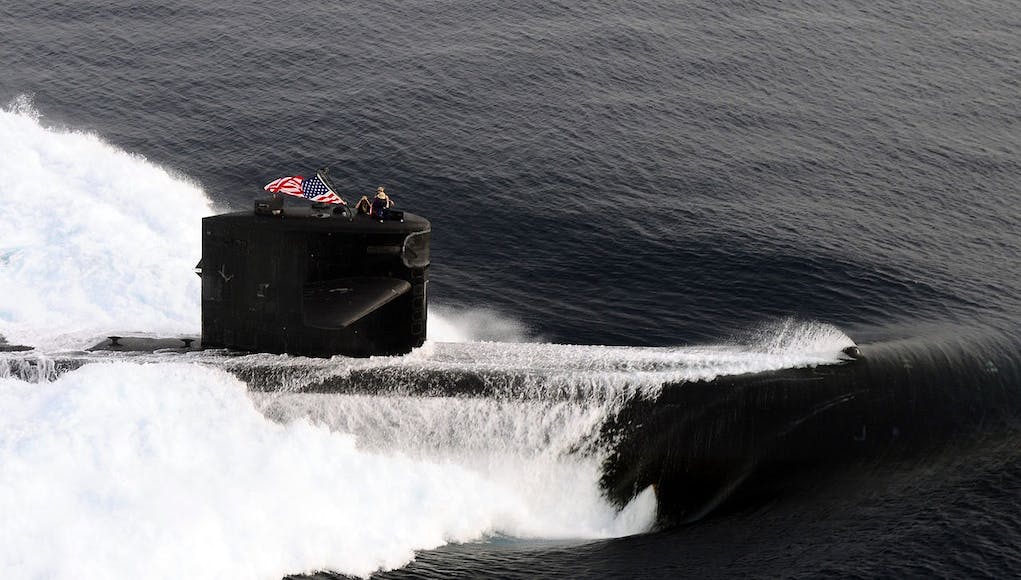 USS Pittsburgh is among the oldest serving nuclear submarines in service with the US Navy. The sub was first commissioned in 1985 and may be decommissioned in 2019.

Crewed by 12 officers and 98 enlisted sailors, USS Pittsburgh is part of the US Atlantic Fleet. The vessel has a submerged full displacement of 6,193 tons.

The vessel participated in strikes on Iraq in 1991 during Operation Desert Storm using submarine-launched Tomahawk cruise missiles. It returned in early 2003 to participate in strikes as part of Operation Iraqi Freedom.

HMNB Clyde is sited at Faslane in the west of Scotland not far from Glasgow, one of Britain’s largest cities. It’s one of three operating bases in the United Kingdom for the Royal Navy, the others being HMNB Devonport and HMNB Portsmouth. It is best known as the home of Britain’s nuclear weapons, in the form of nuclear submarines armed with Trident missiles.

Just one of 68 commissioned subs in their inventory! It is just incredible what they have.

If there is one area the Royal Navy desperately needs expanding more than others is the SSN force. All the fancy carriers and escorts in the world are no match for a decent fleet of Astutes. Not realistic to expect more while the Dreadnoughts are under construction but surely we must follow on to increase the Astute fleet with batch 2?

Have they even cut the steel yet for the first Dreadnought? If not when is actual work due to begin. Far as I understand right now it’s in the design phase; if so then surely we could squeeze out another Astute or 2 before then?

I think 10 total would be enough.

According to various sources, including UKDJ, the first 2 are under construction, with steel cut in October 2016. I assume therefore that further SSNs are not feasible until at least the first 2 are in the water.

I have just paid a voluntary tax of £4bn to buy 3 more Astutes. Job done 🙂

Seriously though, I lobby my local MP and the MOD.

Yes a couple of years ago they had a cutting ceremony and now are decking out . I can’t say anymore .

TH: I will personally be building 3 more Advanced Astute (AA) boats. Have to study my welding.

I have my own. I named it Absurd in your honour.

Agree. SSN for sea denial, along with a CBG.

RN still needs 2nd line ships for the myriad other tasks though and these are expensive.

The USN is facing problems in terms of maintaining SSN and destroyer numbers.

Luckily their number one ally the UK decided to build 2 carriers and scupper their SSN and escort to fleet to help out. Because the USN hasn’t got many large aviation ships and the USAF hasn’t any long range aircraft……

The UK’s carriers are actually adding to the the USN’s escort and SSN workload.

Hi folks, yes completely agree we do need more Astute subs, 10/12 would be ideal for our needs. Nice to see our cozens pay us a visit. Not too sure how the SNP will view this some form of a rant in the House of Commons no doubt? A nuke sub in Scottish water, of course we won’t here them mention about the close relationship with US military we have helping to protect ALL the UK.

Nice to read about the visit to Faslane. Reminds me of when we used to operate out of Holy Loch.. do agree that US and UK NEED MORE subs

Nice to hear about the visit. Reminds me of the days we operated out of Holy Loch. Do agree that more subs are needed by US and UK.

Nice to hear about the visit. Reminds me of when we used to operate out of Holy Loch. Do agree that US and UK NEED MORE subs.

is it just me who thinks we should invest in some smaller diesel-electric subs, something like the Swedish Gotland class or some sort of adaptation of this to make it able to launch Tomahawk missiles for smaller tasks that don’t require an astute class, 7 isn’t enough so if we had some smaller cheaper subs it would take some of the load off of the Astute class.