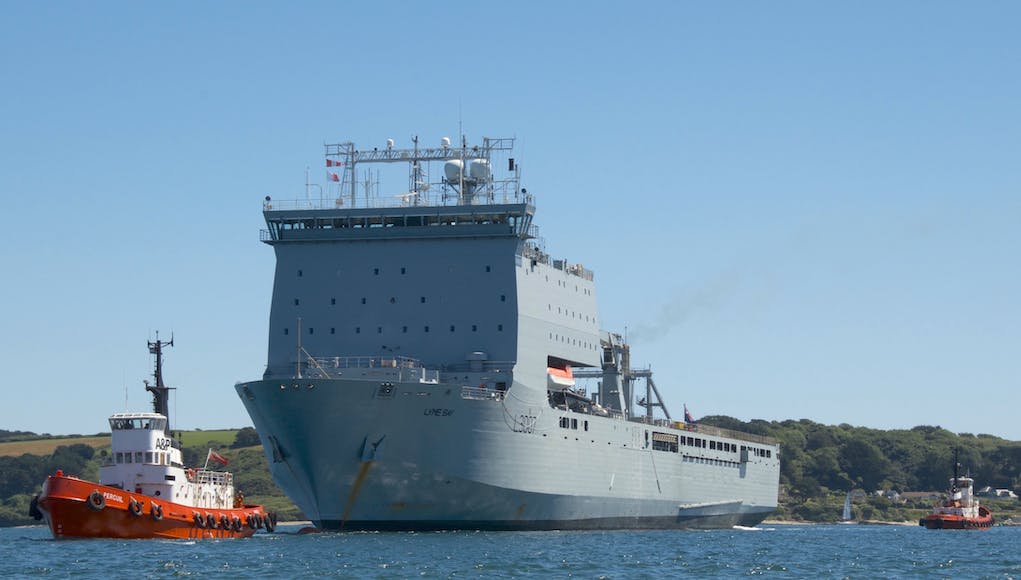 The Falmouth facility is currently half way through a refit for RFA Argus as part of A&P Group‘s contract to provide maintenance support to a cluster of MoD vessels, which include RFA Argus and the RFA Bay Class vessels Mounts Bay, Cardigan Bay and Lyme Bay.

In recent weeks, A&P’s team has supported RFA Cardigan Bay while on operations in the Persian Gulf – completing a two-week maintenance period at the ASRY yard in Bahrain and has concluded an eight-week alongside repair programme for RFA Mounts Bay in Detyens Shipyard in Charleston, USA. A&P’s team planned the work in the UK, travelling to Detyens to oversee and support the yard in implementation.  Work included replacing the vessel’s exhaust silencer to minimise noise.

The company tell us that the defence team is currently preparing for the arrival of RFA Tideforce, the final ship of the RFA’s fleet of four new Tide Class tankers, this Summer.  The vessel will undergo a period of UK customisation followed by sea trials, as did its sister vessel RFA Tidespring. RFA Tiderace is undertaking capability trials and RFA Tidesurge is currently in Falmouth undergoing customisation work.

A&P Group was awarded the Ministry of Defence (MoD) UKCCATS contract to provide a period of UK customisation and equipment fit-outs for all four of the RFA’s new fleet of Tide Class tankers and co-ordinate full military Capability Assessment Trials, in 2015.

A&P is also preparing for the arrival of HMS Enterprise – a multi-role survey vessel and HMS Mersey – a River-class offshore patrol vessel, which are due later this year for scheduled maintenance on a contract awarded from BAE Systems.

“A&P Defence continues to perform well, supporting the RFA and the MoD to achieve efficiencies in through life support. A&P Defence is a key area of growth for the group and we look forward to further developing our markets here in the UK and abroad.”

“A&P’s ability to manage a number of complex and international programmes of work simultaneously lies in the expertise of our team, the scale of our operations, facilities and infrastructure, our global reach, the detailed knowledge we have of the vessels and the partnered relationship we have established with Commercially Supported Shipping and The Ministry of Defence.

We are very proud of this ongoing partnership and pride ourselves on a collaborative way of working that delivers a low risk and cost-effective solution to the RFA, wherever its vessels are in the world.  We understand the unique requirements of the RFA and are committed to ensuring the fleet is fit to fight, now and in the future.

It’s been an especially busy period in Falmouth for defence work and with the imminent arrival of RFA Tideforce, it looks set to continue.”

This leads me to believe, on account of Type 31 being an export success, that we might soon see a new ‘golden age’ of British ship building. Of course nothing like the glory days of old by still onwards and upwards.

It’s amazing how we don’t build more really: astute possibly best ssn attack sub ou there; t45 one of the best aaw ships out there; t26 will be the best asw ship out there. If only we could offer them in a slightly less gold plated version and market them properly we might see a Renaissance.
We must be at least regaining our reputation as great ship designers and have a great platform to build off now, just need some government backing of new ideas coming through and to modernise our ship yards and who knows what’s possible

Not when BAE are building the ships, The Saudis are acquiring two new fleets of warships and BAE are no even bidding despite it being there biggest export customer.

Anyone that can afford to buy vessells like T45 will opt for US designs or build their own. In fact I can barley think of a single export of a high end destroyer in last 20 years, even the Hobarts were a domestic build.

Thats crazy in terms of BAE not bidding on the Saudi contracts. If they are claiming to be at full capacity why are we building T26 at a snails pace? Maybe happy fleacing the government on uncompetitive contracts rather than compete for global sales where they need to deliver value for money.

The Saudi East and West fleet upgrades are geo-political as much as capability led. In the air world BAe and the US suppliers (F15) dominate. In the maritime sphere its the French and US with the UK only supplying the MCMV know how. T45 was offered to KSA years ago and interest was high …as was the price hence the deal never materialised. I past years when I have been with RSNF officers visiting a T45 they are all in awe of the capabilities and in conversation (and hindsight) they wish the money had been spent. As of now BAe… Read more »

The America reactor went into Dreadnaught, all our reactors thereafter where British by RR.

British reactors contain such a high concentration of uranium that they are a nuclear weapon in their own right and can’t be exported under NNPT, an interesting idea might have been a lease arrangement with Australia, I’m sure it was offered but Australia wants AIP.