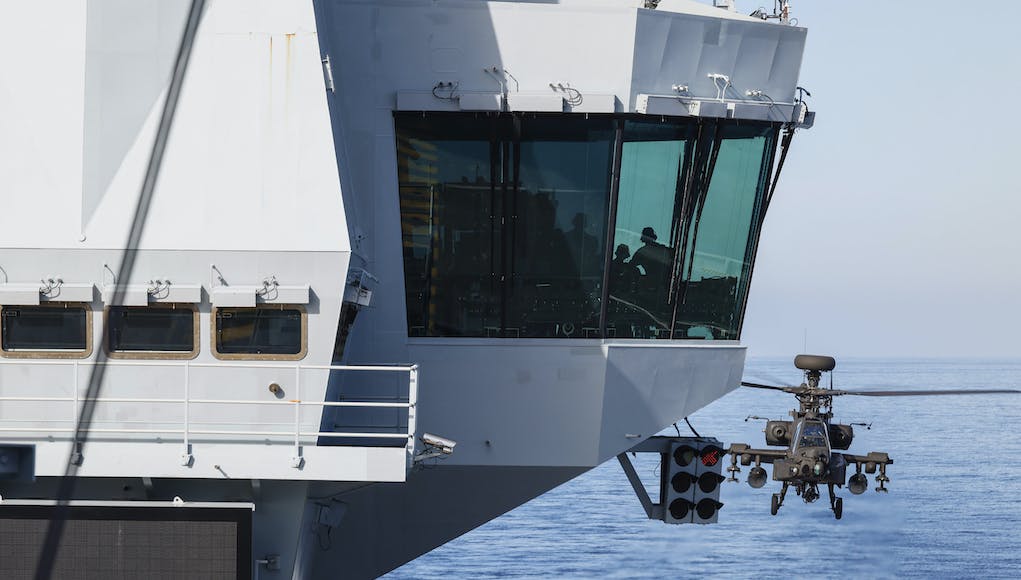 “Three Apache gunships joined HMS Prince of Wales to allow the Army Air Corps’ fliers get their sea legs back – and give the Portsmouth-based warship a taste of the helicopter’s striking power. The fearsome-looking aircraft joined the carrier before she departed her home base on her latest series of trials and training in the English and Bristol Channels.

The Army Air Corps maintains a specialist maritime Apache squadron, 656, with modified gunships equipped with floatation devices should one of the multi-million-pound helicopters having to ditch (thankfully they haven’t).

Otherwise it remains the same fearsome tank-busting battlewagon operated over land, equipped with a chain gun capable of spitting out a hail of 30mm lead at 600 rounds a minute, CRV rockets to knock out buildings and Hellfire anti-tank missiles.” The emphasis of the squadron’s embarkation on the carrier was ensuring air and ground crew were used to operating at sea – and to train Prince of Wales’ air/air engineering departments in handling, moving, maintaining and launching/recovering the Apache as part of the carrier’s broader air group. The Army Air Corps fliers landed and took off 161 times, qualified one new pilot for maritime operations by day/night, while eight more regained or maintained their currency.

You can read more from the source here.

Would it not be better if the Navy had a squadron of Apaches that they could deploy when and where needed .

No because then you end up with duplicate command, logistics, maintenance chains etc when you don’t need to,
keeping all the Apaches with the Army keeps things simple

Yes, I was just thinking that. We do not have the depth to run 2 different services.

I’d rather be thankful we have 50 new ones in order than worry about which service they are under.

50 is a useful number IRL and will be quite enough for most purposes.

If we are fighting massed tanks across Europe then even 4x that number wouldn’t be the answer and we would be better off with loads of drones.

That’s if we actually get the 50 and they don’t decide to cut the the order number , the way they seem to do with everything else that is ordered.

I think, although someone may correct me, that the second batch of 16 have actually been ordered.

Back in the day, we were meant to have 99 Apache, but order was cut to 66. Only 50 of those being replaced. The numbers always get smaller but 50 is bare minimum. When you delete those in training role and war reserve and not serviceable – we might only have about 30-35 of those 50 to actually deploy.

Army fly anti-tank helicopters and always have done form Scout/SS11 through Lynx/TOW to Apache/Hellfire. We don’t want to change the plan now, for zero advantage.
You need everything to fight massed tanks, not just helicopters, not just drones, not just own tanks.

Surely if the Navy had its own squadron of Apaches , they would be responsible for command, logistics and maintenance.

But that’s the problem we already have an apache force, why duplicate it and cost ourselves a fortune when it’s not necessary. I’d be more inclined to keep some Float modified AH-1s in 656SQN with them permanently attached to the carrier groups and they can take the D logistic chain with them, then stand up a replacement squadron in AAC and let the AAC force swap to E’s. Engine maintenance is the only easy bit for the navy as the merlin’s and AH-1s both use RTM-322, the rest is easier to let the AAC do it as they have been… Read more »

Also if the Navy was in charge of them they’d have to be a different, navalised, model of Apache.
Short term deployments on a Carrier is hard enough on a non-navalised airframe without planning on permanantly operating them from sea…

Navy should not get them – their role is not to kill tanks over land – unless the world has gone mad.

No. Apache is an army asset. Navy is not in the business of attacking tanks over land. Army has invested much time (many years), money and effort in marinising a squadron, training AAC aircrew and REME maintainers in maritime operation. Why start again from scratch? We are supposed to be fine-tuning this capability and achieving FOC on HMS QE asap, not binning it and starting again with different people. A far more cogent point is to ask why the RAF continues to muscle in on FAA business by operating F-35B from carriers. Navy should operate all F-35Bs. There was an… Read more »

I think the issue was a) RN was unloved child for quite a while and had it Harrier/Carrier box of toys taken away in 2010 and budgets in a mess; and b) RAF was afraid that FAA would actually be a superior force with F35 to Typhoon so wanted in. Problem is to give RN all of F35 would entail RN getting a big budget increase. Also would kick off an RAF turf war over limiting buy and what new toy RAF would get. All that said it is possible that when Tempest comes on line RN May get gifted… Read more »

I dont think it is a case of the RAF muscling in on FAA business , RAF is supporting the FAA F35 and i think if the FAA had a full quota of jets , the RAF would probably be operating from RAF bases.

With the Army now being so small in size I wonder if it would be worth putting it under the Royal Marines and all helicopters under the RAF. The Army, particularly it’s leadership seem the least capable of all three services and let’s not get started on the failure of army procurement.

BobA
Reply to  Order of the Ditch

I hope you’re kidding. On what basis do you say that its leadership is the least capable? There seems to be this perception that the Army is in a terrible state because it’s equipment programme appears shambolic – but guess what, everyone thought the RN and RAF were an irrelevance 10 years ago whilst the Army was fighting the hardest campaign we’ve done since WW2. Whilst that was happening, the RN and RAF were sorting out their equipment programmes and their role definition – ie what their role outside the campaign actually is. Op ENTIRITY (the Army campaign footing that… Read more »

Strong reply, I think your also correct in much of your argument. My back ground is in armour, and although very capable in their field, the RM do not combined arms to the same level or with the same numbers as the Army.

Well the RAF do make wonderful food, so I think they’d very much like to take on the tastings of the RAF ﻿ 😉 ﻿

In all seriousness, no. It’s just a silly joke, although I’ve never really understood the logic of battlefield helicopters being in the RAF rather than the Army given that they solely support Army ops (except the odd MACA).

Yes I would agree, unless it changes in the future.

In a recent article about a replacement for the Puma , it stated that the budget for the Puma came out of the Army’s finance even though it was operated by the RAF.

The RAF having Puma (and its successor) and Chinook makes zero sense now. Those platforms customer is the Army. The old RAF excuse of supporting Harrier’s in the field or managing air assets with a longer range over the battlefield is increasingly risible, particularly with the RA holding Watchkeeper and, most importantly, LEAPP and Sky Sabre.

Rotary wing needs to be all FAA and Army.

This maybe will happen in the future

Apparently JHC was the solution to placing all rotary aircraft under one command rather than putting all aircraft in to kne service.

I agree. US Army operate Chinook, not USAF – so we could do the same.

And I was just going to tell him to wind his neck in…..mmmmm…your rather top notch response trumped mine methinks!

Daniele Mandelli
Reply to  Order of the Ditch

That is twice the size of the RN and RAF Combined, maybe put them under command of the army?

It needs reform in structures and equipment but not like that.

If anything the helicopters of the SHF could be part of the AAC.

Interesting. Please expand. There is an argument for Infantry Battalions to be larger, so that the rule of 4 could be achieved at each level ie 4 sections to a rifle platoon, 4 platoons to a rifle company, 4 rifle companies to a battalion.

With the reduction in army numbers and difficulty in recruitment

Graham Moore
Reply to  Order of the Ditch

The Army is 80,000 (and heading down to 72,500) but with the Reserve Army is around 105,000. Do you seriously think that you should put that under a formation of 8,400 RM (Reg and Reserve)?? Tail wagging dog. Helicopters under the RAF – why? If anything there is an argument for Chinooks and Pumas to go to the Army, as they support the Army. Why do you cast doubt on Army leadership? Evidence? CDS is army, CGS is the very clever and ex-SAS Carleton-Smith (I served under him), Dep CGS (Tickell) has the MBE, OBE and CBE; Commander Field Army… Read more »

True, but thats a bit different from determining which service flies which type.

The ideal scenario would be the FAA keep the Wildcats and the Merlin .
The Army keep the Apaches, Wildcats and take over the Puma and Chinook.
So then you have to decide if the Air Force need a fleet of helicopters and what type .