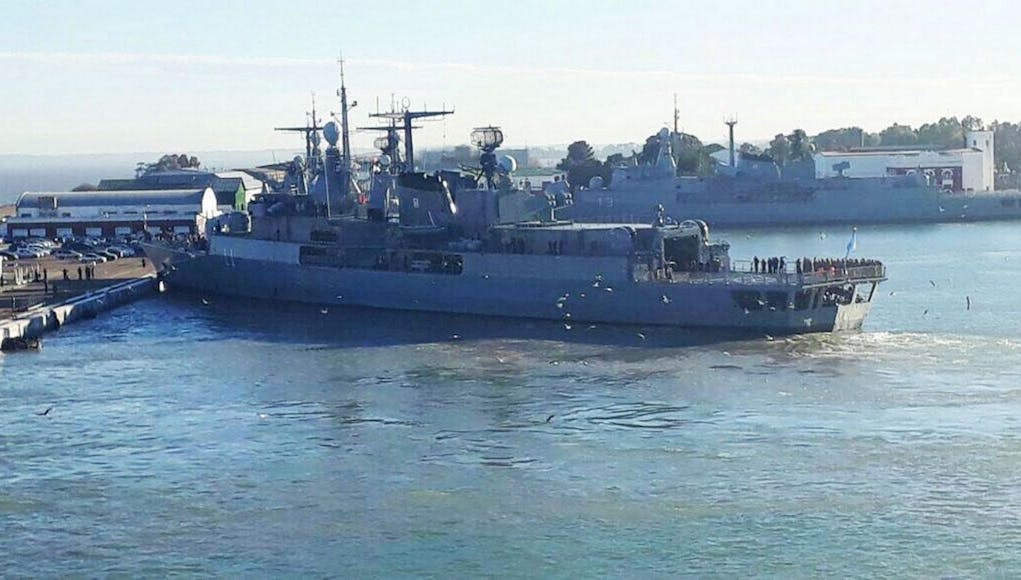 Argentine destroyer La Argentina was damaged after ramming a jetty and catching fire after attempts to repair the damage.

The collision resulted in a gash in La Argentina’s bow. She was quickly repaired, but undergoing repairs, a fire broke out after an accident with welding equipment. Repairs were completed however, and La Argentina departed for Peru yesterday.

ARA La Argentina is the second ship of the MEKO 360H2 series of four destroyers built for the Argentine Navy.

The Argentine Navy struggles to meet maintenance and training requirements because of financial problems and import restrictions.

The Almirante Brown class are reported to be short of spares and suffering engine problems, plus all their ordnance is past its expiry date. As a result La Argentina suffered a major breakdown in 2012 and rarely goes to sea.

More information can be found in local media, MercoPress originally broke this story and their article can be found here.

The problems don’t stop there, their submarine crews despite benefiting from a recent upgrade, need at least 190 days of immersion practice and only spent 19 hours submerged in 2015. A similar situation is faced by their four destroyers, they don’t have any weaponry.

Argentine ground forces rarely have the resources for training and are vastly under equipped, their kit dates back to the 70’s and is in very short supply.

In addition to this, the Argentine Air Force largely consists of a collection of obsolete aircraft mostly dating back to the 1970’s, which are frequently grounded due to poor serviceability.

Albeit it is unlikely they will try to retake the Falklands, they Are open to foreign pressure they could not resist resulting in regional instability.

It’s captain a certain, H. Simpson, quickly denied any responsibility, adding only that it was his first day.

In case anyone is wondering what he said, he is suggesting there are more economic ways of regaining the Falklands – like buying the Ebola virus at $20 a time.

Jose don’t take it personally. A wise man once said in life you can either laugh or cry. It’s better to laugh.

What does Argentina need a Navy for?
Start another silly war against a world Power?
Sell or scrap them ships and invest in coast guard vesels be a lot cheaper and cost effective.