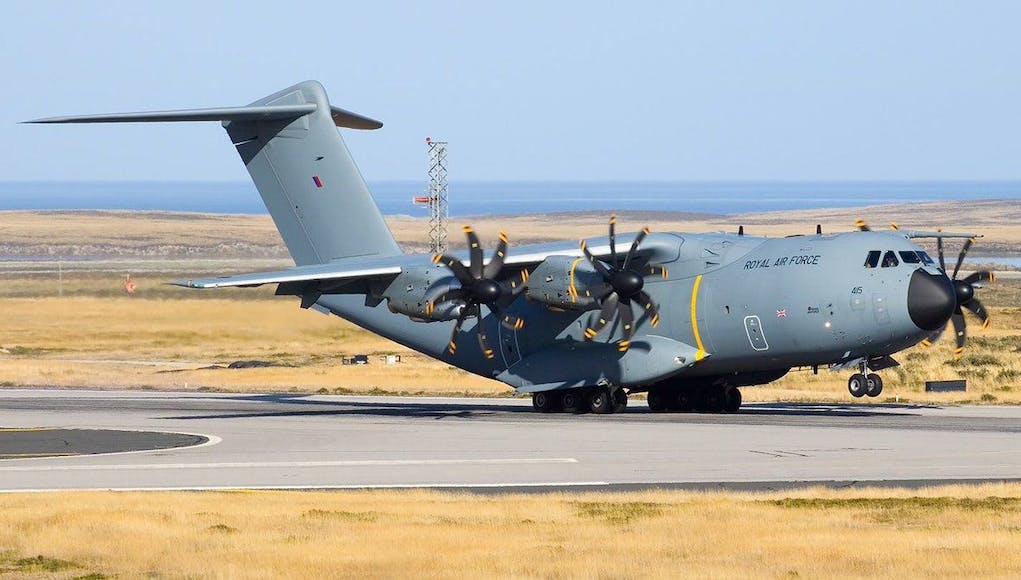 An Atlas A400M transport aircraft arrived in the Falkland Islands last week to take over as tactical airlift, maritime reconnaissance, search and rescue and humanitarian assistance responsibilities from the locally based C-130 Hercules.

“The C130 has been a valuable asset to the Falklands, as demonstrated by her recent humanitarian role in the multi-national search effort for the missing Argentine submarine ARA San Juan in 2017.”

The A400M ‘Atlas’ has a cargo capacity of 32 tonnes and IS capable of carrying passengers, heavy vehicles, helicopters or cargo pallets.

The A400M’s maiden flight, originally planned for 2008, took place on 11 December 2009 from Seville, Spain. Between 2009 and 2010, the aircraft faced cancellation as a result of development program delays and cost overruns; however, the customer nations chose to maintain their support of the project.

Watched a YouTube video from a dash cam (highly recommend it) as a 4×4 is driven from Port Stanley to the RAF base. I was surprised how far away the base was from Stanley, and equally, just how big the base is! Good news for the guys and lassies down there; to have such a new bit of kit. I’m not sure we back in blighty realize just what an undertaking it is, to remain a viable military force on those Islands.

I’ve seen that. Was interested in spotting some of the infrastructure that is not talked about on the island.

I have David! That is why I then wanted a ground view!

Indeed, the military facilities there are incredible.

Just as well, since the Argies starting getting all uppity about the Falklands again yesterday

Yes, noticed some Argentinian law professor visited to give a lecture on how to “settle the dispute” and noone showed up.

Maurice, I went down on a battlefield tour 4 years ago, (Funny enough exactly 4 years ago) MPA is brilliant. Naturally we were placed right at the back of the base, but what I liked is how everything is under cover. The roads around MPA are as good as the UK (If not better) but only a few miles further on, concrete is replaced by aggregate (May have changed by now) Inside MPA is everything you need (Costa/Naafi (3 actually) Cinema,bowling, 2 gyms,) We did drive down to Stanley, where the RE Dive store used to be on the main… Read more »

I spent four months down there in 1985 – fabulous island, and enjoyed my full tour.

I’m not sure what their term for the backcountry is, but it looked stunning in the video. A cross between the Scottish outer isles and the wild of the Steps, absolutely stunning. You were a lucky guy on two counts; not needed to fight there, and the sheer distance from the maddening hustle of European life.

‘Camp’
The Falklands Islanders refer to everything outside of Stanley as the ‘Camp’.
Can cause some slight confusion if you here the term and think they may be referring to the main base at MPA.

They call it the camp. I think.

From the Spanish word ‘campo’ meaning the country or countryside.

Some good support there for everyone down in the Falklands and rightly so.

But why is it the RAF have found the A400M to be everything they wanted and it works ‘out of the box’ and yet the French and Germans find nothing but faults and need to ‘cancel’ orders. Funny that ….

That’s a good point actually, what is the reason for that? I’m guessing there was an implication there, but it went over my head

I seem to remember they had some initial problems but it seems they have sorted them if they are confident of its operation that far from home.

We have the same problems with the Atlas as the French and Germans. It still works, it just has issues and is not what it was promised to be.

(Chris H) Ben P – care to inform us of itys failings? And where it is not ‘what it was promised to be’? I sometimes think the A00M has become the aircraft of choice for those looking to have a bit of a whinge …. And has the fact we are still training aircrews on it and migrating it into our operational fleet with new aircraft still arriving maybe got something to do with it? every new aircraft has ‘issues’ but that does not mean it is not what was promised. I made a detailed reply with sources to ‘North’… Read more »

Have the Germans ever bought from a multinational programme but didn’t have to cancel most of their order right after the workshare was decided ?

Well it can’t tank helicopters because the props generate so much turbulence that the hoses jump all over the places, and also can’t do paratroop drops out the two rear doors, also because of turbulence. Thus Germany & France jointly buying KC-130Js. It’s too important, especially with Mali dragging out.

(Chris H) – North – well of course while I stand to be corrected we have never tanked helicopters and have no need to. I doubt the French or Germans have a huge demand for that either given they have smaller helicopter fleets than we do (and why the French need RAF and RCAF Chinooks in Africa). But the fact remains the A400M has been passed as a tanker and the French are using them: https://www.defensenews.com/air/2017/12/01/france-receives-its-first-a400m-fitted-with-pods-for-midair-refueling/ The French were also dropping sticks of 30 Paras out the two doors in 2016. And they did it 15 times. https://www.airforce-technology.com/uncategorised/newsfrench-air-force-tests-a400ms-paratrooper-delivery-capability-4948185/ Sort of… Read more »

(Chris H) – North my reply has been held for ‘Moderation’ ….Lol

I’ll be interested to see this debate unfold – I’m keen to understand exactly where we are with A400M.

It’s annoying when a comment goes into moderation. Has anyone detected a pattern? Sometimes when I post too many links, maybe 3 or 4 in a single post, I have seen it happen.

I had several posts moderated yesterday and none have yet appeared!

I even asked them upstairs why was I being moderated. No reply.

I’m interested in this. All my posts yesterday were moderated and are still to appear. I even emailed them upstairs asking why? Just posted using work pc and that’s been moderated too.

You’re wrong I am afraid. It can tank helicopters but the French Air Force has decided not to use it in this role because French Air Force test pilots judged the leading edge rotor blades of the Caracal to be too close to the high mounted T-tail of the aircraft in the event they have to break off in an emergency manoeuvre. So Airbus is now investigating with Cobham the use of a longer hose. This is not easy and will take time to perfect. Because in the meantime the Caracal mission (CSAR) is so critical to the FAF, they… Read more »

Err… the RAF have found as many issues with A400M as the Germans and French, only their attitude towards problems is slightly different. The German approach is very contractual/transactional. Threaten Armageddon and make the Contractor fix everything. The Brits put the contract to one side, roll up their sleeves and say “how can we fix this together”. The French are somewhere in the middle. But it’s interesting to note nevertheless, that the French did the first real in-theatre deployment (for real) with the aeroplane to Mali. And the ones that get on with it the most (in terms of flying… Read more »

Morning all
For he role required the A400 Atlas is the perfect platform and gives an increase in capability for HMG forces on the islands, it releases the C-130 back to the U.K. to be either utilised for other tastings or be removed from the liability and sold.
Change is happening in the MoD, for the first time in years it is being given a bit is space to sort its life out instead or galavanting around the Middle East and Afghanistan fighting political wars.

This is certainly good news for all Falkland Islanders,a great piece of kit that can be used for many roles,ive got to say in the pic it certainly looks stunning against the background.

Yes that was my thought!