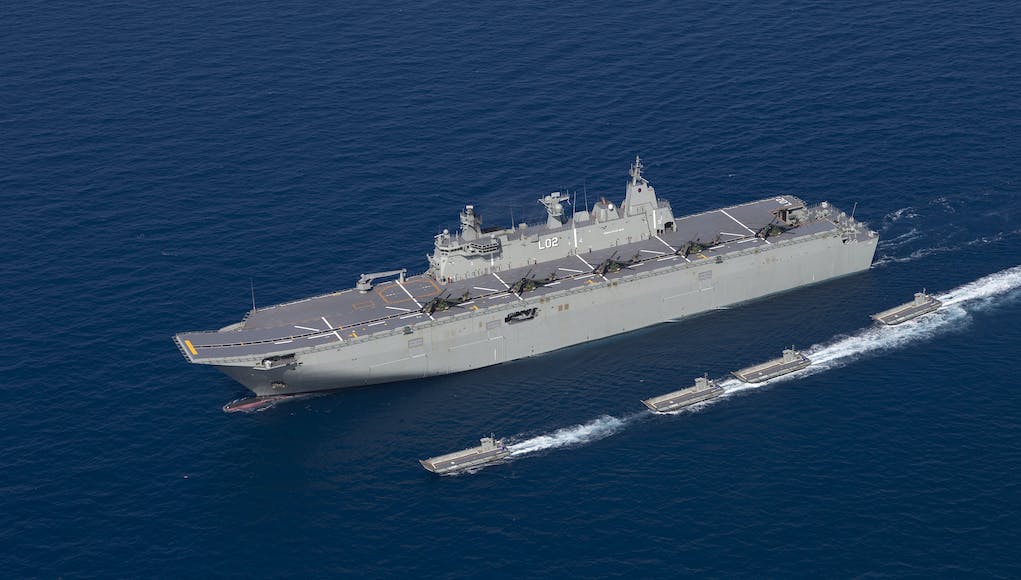 The Australian warship was followed closely by the Chinese military in a recent transit of the South China Sea.

“It is controversial, we were quite aware of that. We transited north and south through the South China Sea in international waters and we were engaged, as we normally are, by other navies.

They’ll want to know who we are, where we’re going and what our intentions are, and the Chinese were no different — they were friendly, they were professional.”

Last year the ABC also revealed three Australian warships were also challenged by the Chinese military as they made their way to Vietnam.

6 apparently or ten in commando role

Don’t forget they’re predominantly for their NH90’s which are slightly bigger than a Blackhawk. They. An only handle 4 Chinooks though.

A witness on board the HMAS Canberra says Australian navy helicopter pilots were deliberately targeted by lasers from Chinese ‘Fishing Vessels’ shadowing this deployment while they exercised in the South China Sea, forcing the helicopters to return to the deck as a precaution.

A good argument for giving these ships a minimal air defense wing when it upgrade time.

So if a pilot does not have a protective visor and becomes blinded by the laser. Does that not by definition become grievous bodily harm and thereby constitute the right to self-defence? What would happen if one of these “fishing vessels” went missing or perhaps was boarded with the crew arrested?

It might give them the right to self defence but here’s the problem.This ship was passing very close to chinese waters.In a confrontation considering how many assets the chinese can mobilise within minutes such a poorly defended ship as these helicopter carriers are would quickly be eliminated.Same goes for the pilots they may decide to fire back but they’d also know that its the last thing they ever do.In such circumstances its better to pretend nothing is happening since you’re outnumbered and far from home.

If I understand the Chinese ‘spin’ on this, lasers are regularly used by commercial craft as a means of distance measurement, so the use of them arcing through the air in the direction of aircraft is purely ‘coincidental’.

The appropriate response to use of lasers against military aircraft in international waters is an issue that has not yet matured; but in absence of hostilities, the safety of the aircrew remains paramount.

Good looking ship, useful too with the ramp still fitted.

Not intended for use (but being considered in conjunction with F35-B). Australian responses to purchasing the LHD with the ramp basically amounted to “we honestly couldn’t be bothered removing it, and it might be useful at some point).

Apparently the ramp can’t actually handle jump jets as it isn’t properly supported and it was just cheaper to leave it in. I don’t know if its true but its what I’ve heard anyway!

It’s true. Unlike ramps on British carriers, the ramp on the Juan Carlos-class (which Canberra is based on) is structural and it would have been incurred more costs to redesign the hull to remove the ramp.

The ramp and associated substructure were unchanged from the Juan Carlos Class design (Harrier-capable). It was reported that the RAN originally wanted to remove the ramp completely so both its new LHDs were true flat-tops, however the costs for re-engineering and re-validation of the design were considered cost (and importantly) time prohibitive, so the ramp remained. The LHD deck surface is however not currently capable of withstanding the heat generated from a F-35B vertical landing, but there remains a ‘potential’ for it to be utilised as such in the future with some expensive structural upgrades and new deck, however its… Read more »

What are the 4 little boats in the picture?
They look to be about the same length as one of the helicopters so I’m struggling to think what they’re for as they don’t look like speed boats that normally pop out of these types of ships. They can’t be mini carriers for radio controlled helicopters on them but that’s what they look like to me.

She has a well deck and carries four LCTs

They do look like great ships. Have they (and Juan Carlos) worked out well in practice? Lots of ships have commissioning and early problems, which the UK and I suspect also the Australian press tend to misrepresent and blow out of all proportion when they occur (e.g. QE prop shaft very minor leak), but has anything genuinely concerning cropped up in any of the three vessels built to this design? I’d love it to happen earlier but when Albion & Bulwark retire something like this would seem to be just the sort of replacements we need. In fact if the… Read more »

Quick answer is that they indeed have some early problems back in mid 2017, soon after launch associated with their diesel-electric powered propellers which sit at the stern of the LHDs known as “azi-pods” mounted on steerable pods that have a 360-degree rotation (ie no conventional rudder). They identified metal fragments in the engine lubricants, while faulty engine seals on were responsible for the migration of various oil types into different engine areas. Here is a news link that explains more: https://www.abc.net.au/news/2017-05-19/navy-cant-rule-out-design-faults-as-cause-of-ships-problems/8542382 These issues were corrected within a 9 month period (dry-dock repairs) and since then they appear to be… Read more »

Thanks TwinTiger. I did remember some reports about issues and had the definite impression from when I read about it that they were basically fairly run-of-the-mill early teething troubles rather than any “it needs major re-engineering to correct a design fault” type of thing so nice to have my impression confirmed. The Australians got some very nice kit here. I particularly like some of the added configurability features, e.g. Wikipedia says that the core hangar capacity of 8 medium sized helicopters can be increased to 18 if the light vehicle deck is also used which I assume is an option… Read more »

Cheers Julian,
I must agree that load ideas developed on this class of amphibious assault ship could be transferred or considered for the FSS. FYI- there is a very informative cutaway of the LHD on the RAN website showing their load configuration:
http://www.navy.gov.au/fleet/ships-boats-craft/lhd

That would be nice but I wasn’t quite going that far! I was thinking these as successors to Albion/Bulwark but in the meantime take some design ideas on flexible spaces onboard for FSS design so that those could be more flexible than just RAS for solid stores. The entire FSS budget (£1bn for hopefully 3 FSS) couldn’t even afford a single Canberra Class so I think we’re going to have to wait until Albion & Bulwark are retired before we have any chance of getting full LHDs into the RN and even then I’m not optimistic that it would happen.… Read more »

Yes, the use of the flexible spaces for the FFS was what I was referring to (though obviously not very well!).
The Albion and Bulwark have just undergone a major refits a few years back so I think they will be around for a few more years at least.

This is a news article from a Malaysian e-magazine about the Canberra recent visit to Malaysia around Easter:

Can we have three please to replace Ocean, Albion and Bulwark, and whilst I am on about the wish list make the deck F35 capable they could then be used in the forgotten but needed escort carrier role.

Convoys are completely out of date and are not needed, so what would they escort. Where would we get the extra planes from?

Geoffrey, in many ways that is wrong, if Europe needs to be reinforced quickly from the US then although men can fly in the heavy equipment would come by sea. It is the same with resupply although there is pre-positioned supplies I can’t remember but I think that is for 30 days so again convoys from the US would be required. To move the the heavy equipment of a mechanised division you need something like 10-12 large roll on roll of transport ships. That is just the equipment. That is a high value convoy that a potential enemy would use… Read more »

This is pretty much one of the ideas behind the Lightning carrier concept. The US Navy have been looking at ways of increasing its air combat presence. One of the trials they are doing is using their amphibious assault ships such as the USS Wasp and embarking 10 to 12 F35Bs, with V22 providing tanking and Seahawks for ASW. Thereby providing an escort carrier for a Marine task force or convoys. This has recently been trailed by the ship going to the South China Sea last April. What they are lacking is their own organic AEW support. The decks are… Read more »

Just been reading up on the V-247 it sounds interesting.

A little “tit for tat” intimidation?

Three replacements Ron? Dream on? With a coaltion government of catastrophic propotions coming up at the next general election, defence procurement and expenditure will sink further. These will be remembered as the good times, 8 years to get three active squadrons of F35’s as a tier 1 partner!

Well, at least the Chi Coms understand who is subservient and who is not.