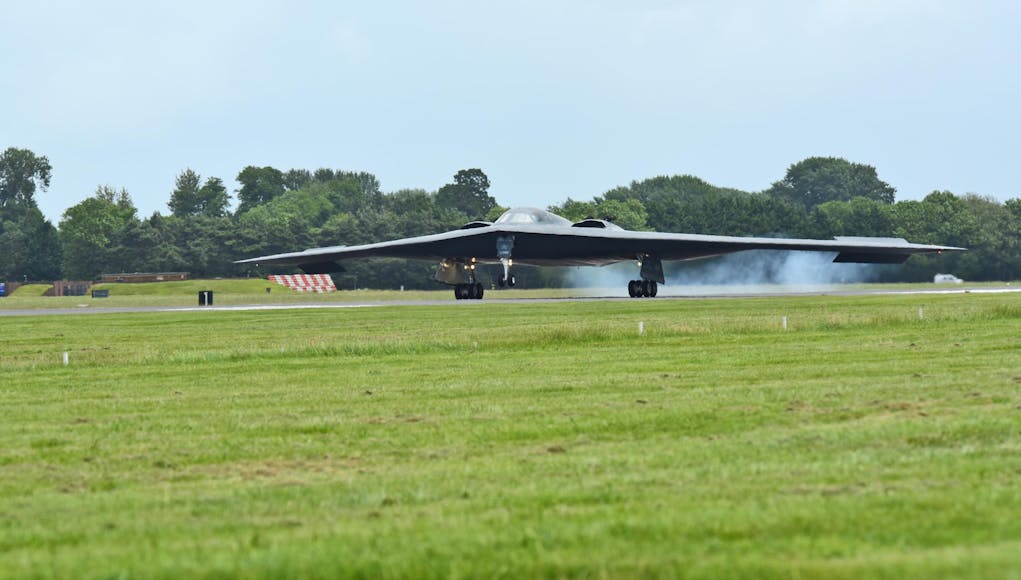 Two B-2 Spirit stealth bombers have joined B-1B Lancers and B-52H Stratofortresses in the United Kingdom.

Three B-52Hs from Barksdale Air Force Base, Louisiana, and three B-1Bs from Ellsworth AFB, South Dakota, along with approximately 800 Airmen, are currently supporting exercises Saber Strike and Baltic Operations in the US European Theater.

While not actively participating in ongoing regional exercises, the B-2s join the other Air Force Global Strike Command assets in support of recurring bomber assurance and deterrence operations. Bomber deployments enhance the readiness and training necessary to respond to any contingency or challenge across the globe.

“The bomber assurance and deterrence missions these three aircraft are supporting are key to reinforcing our commitment to our allies in NATO–in a very visible, very tangible way–that we stand shoulder to shoulder with them, no matter what.”

The US Air Force said in an e-mail:

“U.S. Strategic Command routinely conducts bomber operations across the globe as a demonstration of commitment to collective defense and to integrate with geographic combatant commands operations and activities.

This is the first time that all three bomber platforms have been located together in the European theater, and only the second time total in AFGSC history; the first was in Guam in August 2016.

A number of total force Airmen from Whiteman AFB, Missouri, are supporting the B-2 operation. Many, including Kennish, are members of the Missouri Air National Guard’s 131st Bomb Wing. The Guard wing has cleared a number of operational performance evaluations and readiness assessments to obtain full operational capability to perform the strategic bomber mission of the B-2 alongside the active duty 509th Bomb Wing, at home and at Royal Air Force Fairford.”

I wonder where Trump will attack the next time he gets politically cornered.

He might want to expand the fight against islamic terror and level Bradford.

Germany! Be worried, very worried.
he will go after the BMW and Mercedes plants near Stuttgart. He does hate those German cars.

I was out walking in Northamptonshire on Friday morning.
I could hear a military jet over head and I couldn’t believe my eyes when I spotted the B-2! Not very stealthy ?

Hi chaps, had just been playing my bagpipes on the beach near Cleethorpes Lincolnshire, and was preparing to wonder back home. I heard the noise a light passenger jet would make when passing over head, It made me look up and to my total surprise I spotted two B2 stealth bombers trailing each other about half a mile apart. This was about 15.45 this afternoon. They were up at about five to eight thousand feet and heading southerly, perhaps they were returning to RAF Fairford. Could this be part of the latest exercise? The date is 16/3/2020 on a beautiful… Read more »