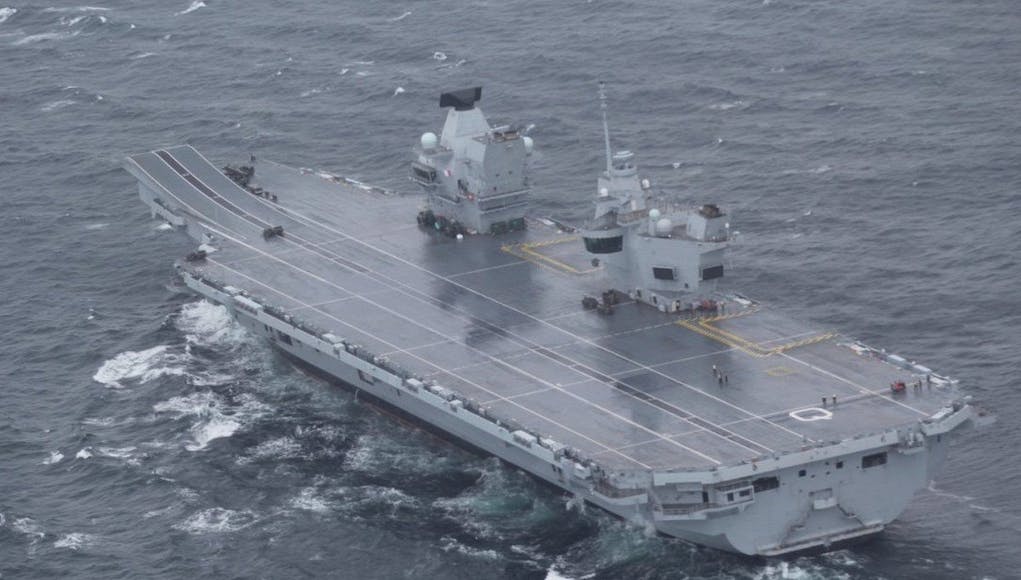 A senior Babcock International executive has been quoted by sources as saying SNP indifference to the sailing of the carrier is a snub to yard workers.

As quoted in EBN, Naval Today Blog and the Express who broke the news, the executive said:

“I am disappointed for our workforce that their own Government has ignored this project and dismissed it as an English project being carried out in a Scottish naval yard. The project has involved suppliers from across Scotland, has produced hundreds of apprentice and graduate opportunities for Scottish youngsters, has involved several universities in development and technical support activities and has been a landmark project for Scotland watched by countries around the world.”

After a question from MSP Murdo Fraser at Holyrood, Sturgeon said:

“I commend all those at Rosyth and elsewhere in Scotland who have contributed to the construction of the Queen Elizabeth. I thank them for their efforts and wish them well as they move on to their next assignment, so I have no difficulty, for once, in agreeing with Murdo Fraser.”

“It’s very disappointing that it took a direct question in the Scottish Parliament to get any kind of acknowledgement from the First Minister about the importance of this project.”

The operation to move the vessel out of the basin was performed by a fleet of tugs and attracted significant public interest as well as statements from many parties and organisations.

When she is next in Rosyth how about fitting her with some actual weapons? Phalanx not fitted currently, 20mm +30mm guns not fitted. Desperately needs sea ceptor or sea viper fitted.

Fitting Sturgeon with a Phallic projectile is an image I really didn’t want Mr Bell and she is enough of a viper as it is ….

Sigh, add this into the list of silly comments along with those who pretty much wanted the F=35B Lightning II to be landing on the deck as she passed under the Forth rail bridge! Look it is simple, Queen Elizabeth is first in class and in effect a prototype. She is owned by the Aircraft Carrier Alliance not the Royal Navy and is at the beginning of some very carefully planned sea trials. Her first five weeks of sea trials are to test her basic systems and propulsion she will then return to Rosyth for defect rectification. Her second five… Read more »

What an idiot Sturgeon is cannot even bring herself to admit the UK as a whole has delivered a superb flagship to the RN and Scotland as part of the UK had a star role in that. Well done Rosyth shipbuilders you are all excellent. Lets hope for many more years of the UK building impressive warships there (as long as no indyref 2).

I travelled to South Queensferry with my partner and two young sons to see it. The obvious lack of planning, organisation and promotion of the event seemed willful. Typical SNP dogma from the Scottish Govt, wanting to actively discourage us from celebrating anything British.

Bang on Mr Bell and I don’t think there’s much chance of indyref2 for a very long time now.

If this snub is true, then her attitude could have ramifications come the next election. The RN’s future build programme centres heavily in Scotland, and many jobs there.

Mr. Bell, you’re right (as usual) but I’m sure that fitting CIWS will occur before the ship is handed over to the navy. As you know, the current plan is for Phalanx and small-calibre guns only. That’s short-sighted and inadequate. All other aircraft carriers have their own short-range missiles too and for good reason. Sea Ceptor should be fitted asap.

Sturgeon is becoming or is a bit of a fool. Anything English is abhorrent to her excepting English money. Scottish taxpayer of course contributes to the Defence budget , and should have a share in the build of ships. In fact the Clyde gets the Lions share but Sturgeon mimics the Ostrich and sees no good in the investment made by the Defence Ministry in Scottish Yards, What a foolish little woman

Well why don’t we build our warships in lets say Harland and Wolfe yards, or in the North East. You can imagine the SNP kicking off in spades about that. Too many of our warships are built in Scotland why not share it out.

As soon as it’s out of Scottish waters all the better.

On how many levels do people not understand that most Scots don’t want anything to do with Britain or Britishness.

As I read this there are 11 comments above you, of which 8 are baseless nonsense about how anti-British/English the First Minister of Scotland is. It would be interesting to see if even one of them could point at a quote to back that up.

As was shown in referendum, the sooner the blue bonnets are oe’r the border pillaging the better for us Picts.

C Avery is as far wrong about Scots and the UK as can be. We voted No in 2014. The nationalists going down the tube. We celebrate that. Rule Britannia.

C Avery Totally wrong in your assumption that most Scots don’t want anything to do with Britain or Britishness. The majority of Scots do want to be part of Britain ??????

Go grow up you biased idiot. If BRITAIN took all the national contracts away from Scotland then we would be right up shits creek. How in hells name could Scotland exist without national contracts in the ship building industry far less any where else. Oil? Wind Power? Bugger all else !

“I commend all those at Rosyth and elsewhere in Scotland who have contributed to the construction of the Queen Elizabeth. I thank them for their efforts and wish them well as they move on to their next assignment, so I have no difficulty, for once, in agreeing with Murdo Fraser.”

“Saying well done to everyone involved is a horrendous snub because of reasons.” said seven time electoral reject and perennial top-up-list bench-warmer while waving a copy of the Daily Mail guide to abusing Scots (souvenir edition with pronunciation guide).

The silence from SNP is deafening, till it is pointed out it is a Great British achievement , only then does she give grudging acknowledgement.