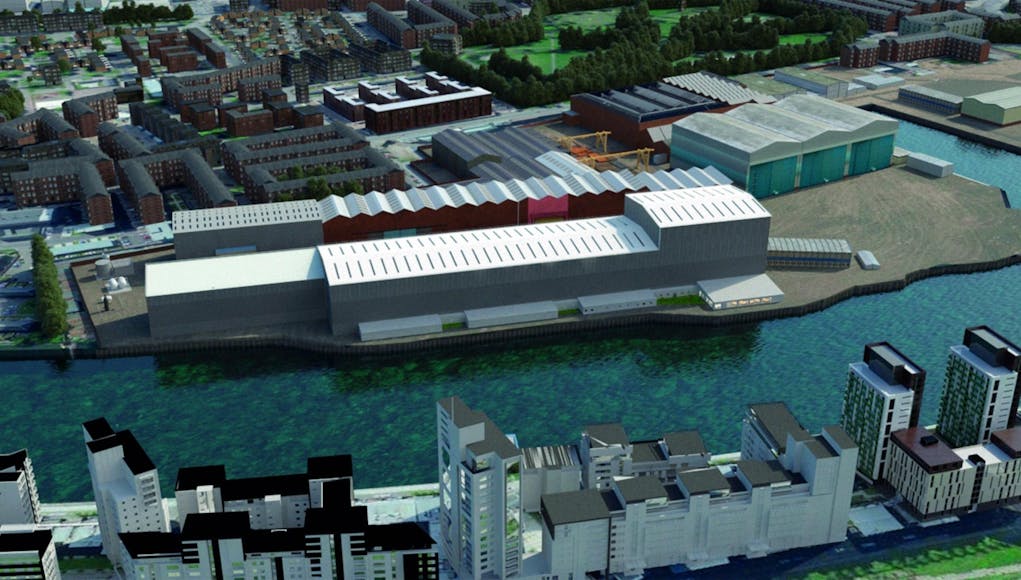 BAE Systems have scaled back plans to construct a large outfitting hall and is instead investing £100m in the Govan and Scotstoun shipyards on the Clyde.

As we reported in 2014, BAE had originally planned a ‘frigate factory’ on a single site. BAE Systems told STV at the time that they intend to press ahead with developing plans to build a new all-encompassing facility at the site which currently employs more than 700 staff. A BAE spokesman said:

“The first, a single site strategy, involves consolidating all phases of the build process at Scotstoun where a new state-of-the-art complex warship manufacturing facility would be built.

The second, a two-site strategy, involves extending and improving existing facilities at both Govan and Scotstoun.

However in 2015, BAE cancelled the ‘frigate factory’ plans in favour of retaining both the Govan and Scotstoun yards opting for a large build hall at the Govan site (pictured above).

This has been cut back further still, with the current, much smaller, build hall being used to assemble sections of the vessels which will then be assembled outside in the open (pictured below). 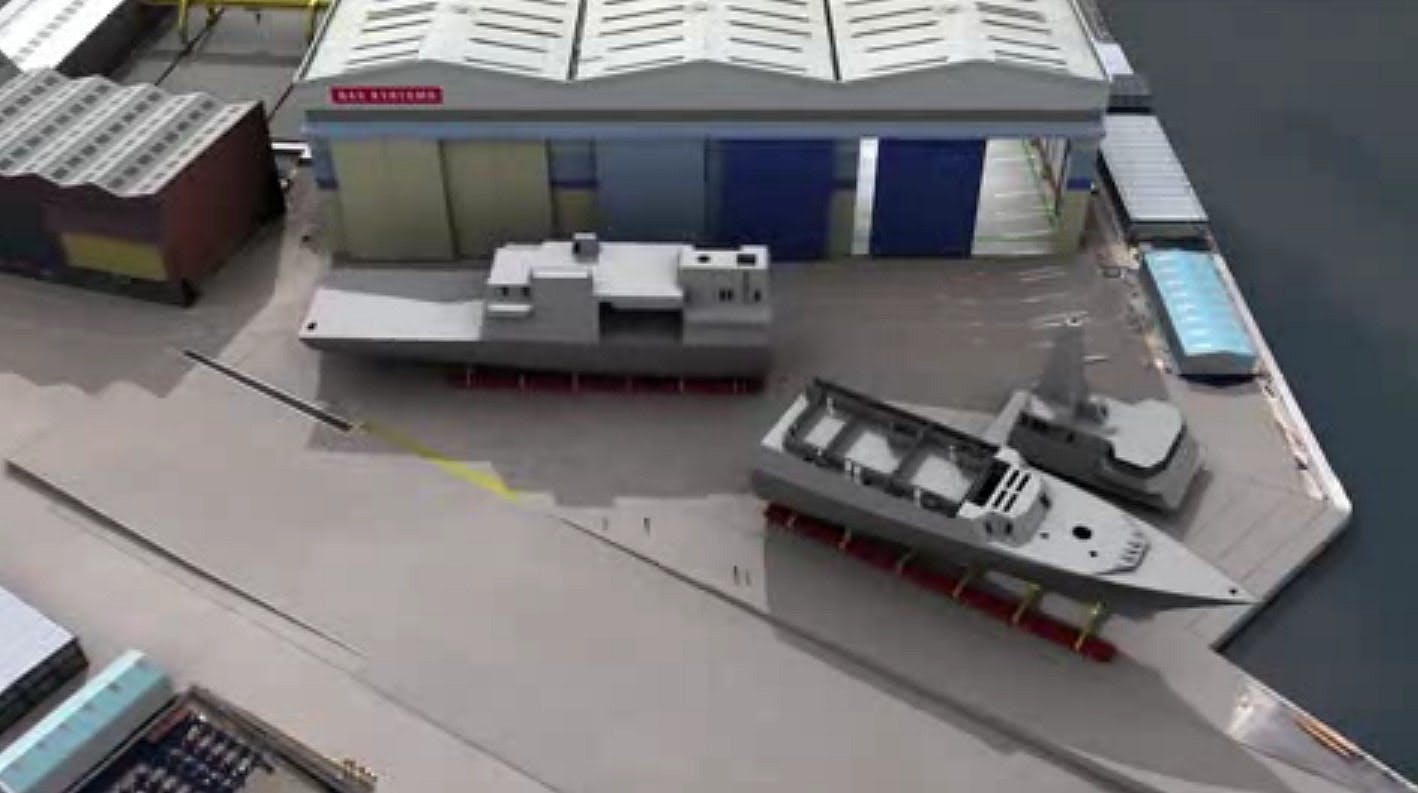 “BAE is investing in infrastructure which is essential for the Type 26 programme and in facilities for employees which is welcome. However, the investments are not on the scale we had hoped for.

This is not the game-changer it could have been and we have long argued that this is a missed opportunity to provide world class shipbuilding facilities in Glasgow which would have helped us secure future export contracts.

Unfortunately, it still means we are constructing ships outside rather than under cover, which is not the way modern shipyards should operate.”

Chris Stephens, SNP MP discussed the impact this will have on export potential:

“MoD pressure not to invest in the frigate factory, which resulted in the demolition of the covered berth and module hall at Scotstoun, means that the Clyde has constrained capacity. Shipyard reconstruction will unlock significant long term advances and savings for the industry.

It will mean that more orders can be won, not only here but overseas. Investment in that reconstruction will see the full potential of shipbuilding on the Clyde being realised.”

As reported by the Herald, a spokesman for BAE said:

“We are investing in modern technologies, systems, ways of working and our infrastructure as we continue to transform the way we design and build warships.

We are making significant investments in Glasgow and our focus is to design and build complex warships to the highest quality whilst ensuring we deliver value for money for our customer and are well placed to compete effectively for future orders.”

It is understood that this development could impact the export chances of the later Type 31s.

This is a pity and I do feel for the workers on the Clyde. I suspect this has a lot to do with the SNP constantly threatening to leave the UK – so I guess the SNP must now intervene and state that they will not leave the UK or that they will repay BAE for its investment in the Clyde. Not an ideal situation all round and I am a believer that all complex surface warships are indeed built in a single facility, the UK cannot maintain more than 1 yard indefinitely. I think the lessons from S Korea… Read more »

Agree with RH we have placed all our proverbial eggs into one slightly broken basket. With SNP wanting independence there is a huge risk of shipbuilding needing to move entirely south of the border (along with the nuclear deterrent and all submarine basing) would be much more sensible to have modular construction from all around the uk then final construction of type 26 and type 31 frigates at whichever location is politically suitable. If Scotland remains part of the uk then yes why not finish the ships on the Clyde. We probably do need a ” frigate factory concept” to… Read more »

Unfortunately you are both right – but that does not make me feel any better for the hard working people in the ship yards and Faslane, whose livelihoods rest upon this work. The UK government would be prudent to move both facilities outside of scotland, but really the SNP can offer to underwrite both facilities (or neither) and in the case of them leaving the union agree to re-imburse the UK government its repatriation costs. If this could be done in a legally binding manner then I guess the investment would go ahead. I am sure we had a frigate… Read more »

Until the Tartan rednecks make up their minds whether they’re staying or going, BAE & the MOD should suspend ALL investment north of the border.

No more pussy footing around with these ingrates.

2 HOURS AGO
However they conclude that on a “normal” accession process, Scotland could take up full EU membership in 2024 if it formally separated from the UK in 2020.
This process could be accelerated if informal talks were able to take place before the end of 2020, making Scotland an independent member state by 2023.
Are we still going to let them build Type 31 and Type 26

pretty good if you ask me…
http://www.stellersystems.co.uk/news/

Does this website take comments with a different point of view? My comment on the previous article about this has not appeared.

Appeared, replied to, and reply replied to. Would you believe it, this is UK Defence Journal (UKD for short?) not TD? How to lose what would otherwise have clearly been a winning posting …

Until Ms Sturgeon signs on the dotted line saying there will never be another IndRef we should make it clearly understood to the Scottish people that rUK will not be held to ransom by anyone. Which means we will build Type 26 on the Clyde and Type 31 wherever we choose from many capable sites. We should also make it very clear that if this ‘Brexit means IndyRef’ nonsense continues much longer then the last four Type 26s will be be built elsewhere as well. Time to let the hard realities shine on the Clyde like it shone on Portsmouth… Read more »

Hi Chris, wonder if you post in the H? (I’m PP). Your figures are provably wrong for Scotland. According to the illustrative accounts for Scotland for 2015-16 (GERS), Scotland ran a deficit of £14.8 billion (9.5 per cent of GDP). For the UK, there was a deficit of £75.3 billion (4.0 per cent of GDP). That INCLUDES any “generous Barnett Forumla payout”. And nobody in Scotland would subscribe to your view “Scotland is a financial basket case”, apart from a handful of extremists. In the event of Independence, Scotland would take a fair share of the UKassets – and debt,… Read more »

It is normal practice to ’round’ numbers. So £14.8 bn is called £15 bn while £14.4 Bn is called ‘£14 Bn. A bit pedantic? And that deficit is after the Barnett Formula money is included. The SNP basically overspent and sent the bill to Westminster. And yes the UK total Deficit was some £75 Bn as you say. But are you saying that the deficits of Scotland (£15 Bn), Wales (£14 Bn) and Northern Ireland (£9 Bn) totalling some £38 Bn in that year are somehow different or do not contribute? OK my saying ‘basket case’ was wrong and I… Read more »

Chris I wasn’t actually being pedantic, what happened is I didn’t complete the point in reply to …costs rUK £15 Bn a year plus generous Barnett Formula payouts …”. As I said, it’s not “plus” Barnett, the (illustrative) deficit includes the Barnett. But it’s not £15 Bn it costs the rUK, because the UK has a deficit all of its own. It’s the difference between the % of GPD deficits in cash terms, which was around £8.5 billion NOT the full £15 billion. As for the deficit itself, it is indeed illustrative, in fact the Scottish Government has absolutely no… Read more »

Dadsarmy. Not sure where you got your figures and statistics from but they are simply wrong. Barnett formulary and the office of national statistics and national audit office indicates clearly that Scotland gains immensely and is subsidised by uk taxpayers hugely. As an Englishman i would like to say that i want the uk to remain as it is now but we cannot stand quiet whilst Nicola Sturgeon talks tripe, lies and is misleading the Scottish. If Scotland left the uk it would be financially worse off by £32-45 billion a year, rapidly running up a Greek style national debt.… Read more »

Mr Bell. I get my balance sheet figures for Scotland from the official source, it’s called GERS – Government Expenditure and Revenue Scotland. These are audited by Audit Scotland, figures come from the Scottish Government and estimates from the Treasury, with some coming from HMRC. These are the official “accounts” of the Scottish Government, and were set up by Ian Lang – Scottish Secretary for the Westminster Conservative Government in 1991, long before Devolution. GERS is also the set of figures used by all the Unionist parties in Scotland who oppose Independence, and the Conservative Secretary of State for Scotland… Read more »

At the end of the day these Frigates will only be built in Scotland if it remains part of the UK so its up to the Scottish people to take that decision in fact as I understand it most of Glasgow votes SNP so as for your comments about Clyde workers sick of being used as political footballs seems a bit off the mark.

Dadsarmy. i am pro the UK remaining together and sorry if you are upset but tough. Scotland will be worse off if there is a 2nd referendum vote and leaves the UK. No RN frigate or any other uk defence contract will go north of the border to an independent Scotland. Reiterate the fact more Scottish voted to remain in the uk then for independence. Thus statistically we know 2 things. We have had a recent referendum AND therefore as Scotland has already voted on both issues, the majority vote is to remain in uk, therefore no need for a… Read more »

It was not going to be for Govan in which bae do not own. This yard bneeds to be owned and run by a shipbuilder (owned by a land owner and run by an aerospace firm).

When the new owner of Ferguson shipyard gave intentions of wanting to buy Govan off of Peel holdings and said about giving some competition to BAE, with the reduction in type 26 ships too, BAE wanted to retain Govan Fairfield yard to protect itself. Retaining the main slipway for launch into a deep building dock complex replacing the unused slips at Govan is the future option for Govan, and feeding sections to a modernised Inchgreen drydock. That is the future for a modern effecient bigger shipbuilding sector on the Clyde. The time will come for Govan and Inchgreen (a new… Read more » 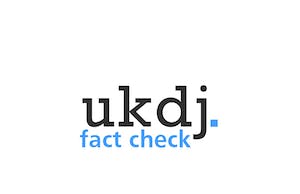