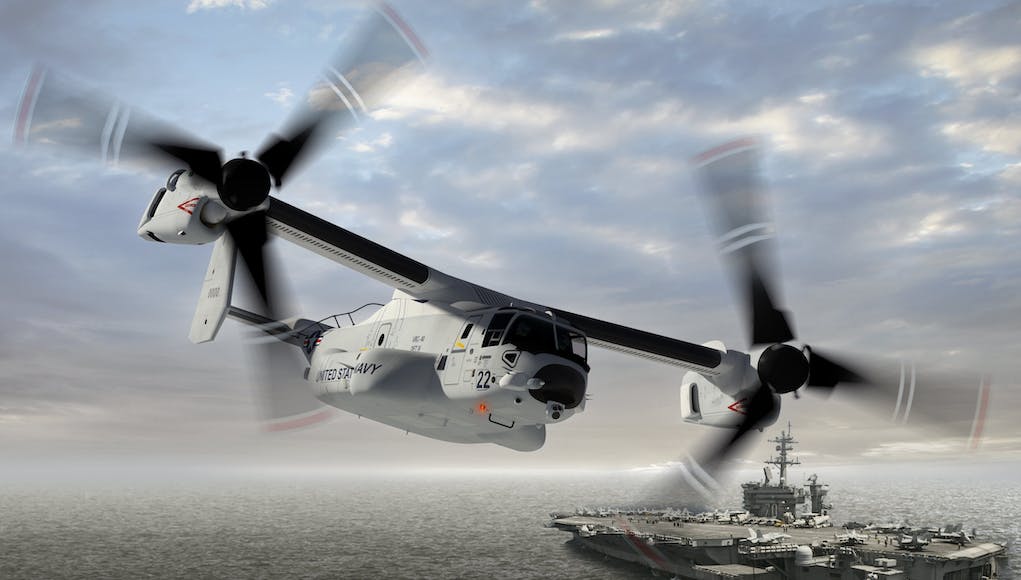 This contract provides a total of 58 tiltrotors to United States Navy, Marines, and Air Force, and the government of Japan.

“Bell Boeing is pleased to extend production of the V-22, supporting our warfighters with one of the most versatile and in-demand platforms in the U.S. arsenal,” said Chris Gehler, Bell Vice President for the V-22 Program.

The US Navy will use its new CMV-22B for transporting personnel and cargo from shore to aircraft carriers, eventually replacing the C-2 Greyhound, which has been in service since the mid-1960s.

“It also enables the U.S. Navy to begin advancing its carrier onboard delivery fleet with modern tiltrotor aircraft. It’s a true win-win.”

A good option as inflight refuelling for the POW and QE? Any thoughts?

Cost probably make it a non-starter!?

$72.4m each for this contract. I do wish we could afford them. The US is already testing a ro-ro AAR rig. It would be a useful range extender. Also, the pilots and operators would have to be on oxygen unless other arrangements could be made, but if V-22 was ever embarked on the carriers for AAR purposes then finding a way to get it to host Crowsnest as well (also ro-ro I assume) would be a big win. The ability to lift the radar another 10,000 foot higher would be well worth having.

£50m each is not a bad price actually Julian,

Maybe we should get in on this and purchase 8 for the carriers only.

Surely its worth it

AEW as well perhaps???? Onboard delivery…

When do we get some?

Don’t think V-22 is actually a particularly useful capability. Cannot carry very much or very far. Very good as a Sea Knight replacement for the USMC, but not much else. But always glad to be proven wrong.

The CMV-22B version is supposed to have extended range fuel tanks (on the wings?? I think). Found this… “Where the V-22 really shines is taking the critical logistics out to a distance that gives the carrier strike group flexibility. The CMV-22B is designed to carry maximum cargo for more than 1,100 nautical miles, whereas the C-2 can’t fly that far in a maximum cargo configuration. Typical ship-to-shore planning is currently at a max range of 800-1,000 nautical miles, and the C-2A is very cargo-weight limited at that range. The Navy variant of the Osprey is not as limited—it will carry… Read more »

As I said, I’m prepared to be proven wrong. Still don’t think we can afford it.

I can’t seem to find the figures but from memory the AAR kit that the US have been testing holds about an F-35B tank-and-a-bit’s worth of fuel in its ro-ro bladders. Is that enough to be worthwhile? I assume, based purely on intuition not knowledge, that a fully loaded F-35B uses a disproportionate amount of fuel on takeoff & climb so maybe a top-up within the CBG air defence bubble would be a worthwhile range multiplier for a handful of aircraft that needed to do a longer range strike? I’m not sure how much it would add to the combat… Read more »

Wouldn’t F-35 buddy-buddy be a better investment? As for carrying spare engines about, what would be the range of a Chinook with an F-35 change unit in it?

I honestly don’t know, I am definitely not an expert on these things but if, as I’m pretty sure I’ve remembered correctly, the bladders on the US ro-ro AAR rig do carry about the equivalent of a full F-35B tank and with the V-22 having its own fuel load on top of that to use for its own take-off, going places and landing I would have thought that a single V-22 launch could offload as much fuel to F-35Bs that need to go on a long mission as maybe 5 or 6 F-35Bs doing the buddy role so in terms… Read more »

It is meant as a top off of aircraft taking off as the B model burns excessive amounts of fuel doing that. The other reason is both the Navy and Marine Corps have not liked the amount of airframe hours consumed on refueling operations.
In the end the refueling kit is more of a stopgap for the Corps’s MUX program and the USN’s MQ-25 program to become available. As the MUX unmanned tilt rotor is supposed to have refueling as one of it’s tasks. While the MQ-25 is meant to be a catapult launched tanker drone.

The MUX is what the RN should be looking at for the carriers. A force of 24 x F35B’s augmented with 36 MUX drones would give the carriers a punch second only to US supercarriers.

If Japan can afford some- surely a limited buy by us shouldn’t be out of the question? training and maintenance surely could be shared with the USA and surely some lease to buy option such as with c17 should be looked at? They must be more much capable in AEW and COD than the merlin (which should concentrate on ASW). I am guessing if the raf wanted them they would order, but as it would be most useful for the RN which has the priority of building the surface fleet up. I can’t help think that RAF would be jealous… Read more »

(Chris H) Simon – why on earth would the RAF be jealous? It has no need for a V-22 as it has bigger uplift capability for land based forces. A400M then onto Chinooks makes the V-22 look rather a waste of money As for the RN I can see the argument for an airborne supply vehicle or more likely an AEW / Crowsnest asset but thats it and even then onboard Chinooks for re-supply would be better. It will never be a viable tanker for the RN. Even the USAF use buddy up tanking using old F-18s. We would be… Read more »

The USMC had been conducting the Air to Air refueling trial in 2016 where the V22 was configured with a single point drogue system from Cobham (UK Company). They managed to successfully refuel two F18s, a Harrier and a Super Sea Stallion. At the time the aircraft was fitted with only one internal cabin tank, so there is scope for additional tanks although they haven’t released the tanking capacity. The most significant factor in the V22s favour is that the V22 can carry the F35’s engine internally, as the only VERTREP aircraft we have that can do this is the… Read more »

Cheers, I’m a muppet, should have tried that earlier….

No real need to transfer an engine by aircraft, the carriers should have at least 2 spares in stock (I mean they are big ships after all) and the Tides can also deliver these to the carrier if need be.

Yes it would be nice – but we dont need anything specific for transferring an engine (chinook will do at a push), but I do think we should get some of these for refuelling.

(Chris H) I have never seen the V-22 Osprey as being of any value to the RN. And certainly not as AAR tankers for carriers. The US Navy have needed the old Greyhounds because they run huge carriers with 5,000 crew and 60+ aircraft so that demands that resource. These latest V-22s seem to be replacing Greyhounds amongst other duties. We just do not need that resource and not @ £72 Mn a piece which is heading into later production costs territory for an F-35 We have 3 test F-35B aircraft located in California. they will never be used in… Read more »

I’m pretty certain there’s a contractual agreement between Leonardo and Bell/Boeing over using “tilt wing/prop” aircraft for the military. Basically Bell/Boeing have all the military contracts whilst Leonardo have the civilian. The three test F35s will remain test aircraft. One of their primary roles will be to integrate and test new weapon systems. This means that the front line fleet can be dedicated to normal tasking. Also these aircraft will be the trial aircraft for future software upgrades and modifications again not troubling the first line aircraft. I think the Osprey would be good for the Navy, its just too… Read more »

It should be available next year.
https://www.flightglobal.com/news/articles/aw609-certification-slips-again-to-end-2019-446030/

USMC/USN V-22’s will soon be regularly operating from Queen Elizabeth, and probably embarked as part of her air group in 2021. If they prove to be a serious capability step-up from an RAF Chinook for COD, maybe the MOD will try to find funds to buy or lease a few. A UK carrier based capability for F-35B AAR is not even a white board wish-list item in the MOD Equipment Plan at the moment. Buddy refuelling would seem to be the easiest to implement, but an inefficient use of scarce aircraft and very expensive F-35B flying hours. Note that the… Read more »

As a pure long range AAR aircraft for the F35B in RN service I would say a limited purchase of 6-8 aircraft would be a very sound buy. It makes absolute sense to extend the F35Bs range out to 800-1000 mile combat radius. Providing the carriers with a significant stand off strike capability. Additional cargo, special forces delivery, VIP transport carrying capability and AEW should be explored. I agree with paceman £56 million per aircraft is actually not that bad for the potential flexibility and force multiplier this aircraft can enable. The question is will the MOD actually really invest… Read more »

On board the QE carriers an AEW Osprey would be transformative: the extra 10,000+ feet of altitude, the longer range, the higher speed, the ability to fly in weather that grounds helos would give the ships the AEW capacity of the old Ark Royal with its Gannets, if not quite the security provided by the USN’s Hawkeyes.

Bring on the Fairey Swordfish; seems as capable if a tad slower than a Greyhound.
Mk XV Torpedo 1800lbs
Range with same 550 miles
Endurance 5.5 hours
I am guessing if you use extra 900lb of fuel you get close to 1000 mile range and still 900lb payload.
No need for catapult launch although you still need the wires. Great serviceability, hugely lower running and crew costs with less training required.