Home Sea ‘Big decks and fast jets are back’, says Defence Secretary on board... 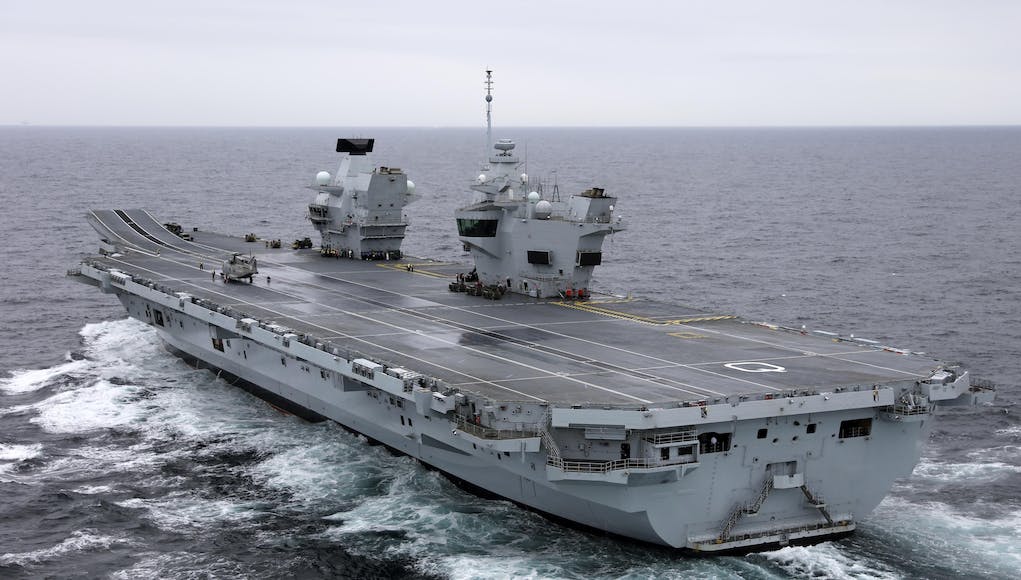 Defence Secretary Michael Fallon has visited HMS Queen Elizabeth, the largest and most powerful ship built for the Royal Navy.

The Defence Secretary landed by Merlin helicopter on the deck of the new aircraft carrier HMS Queen Elizabeth, which is currently on sea trials off the coast of Scotland. He met with members of the crew and thanked them for their contribution to UK defence.

While addressing the Ship’s Company, Fallon announced the Britain’s second aircraft carrier, HMS Prince of Wales, will be officially named at a ceremony in Rosyth on 8th September 2017.

“Our carrier programme is a clear demonstration of British power and commitment to our global standing. With two aircraft carriers we will have one available at all times, providing a world-class carrier strike capability. They offer a prodigious promise to future generations of our determination to continue fronting up to aggression for years to come.

The magnificent HMS Queen Elizabeth provides us with power on a scale we have never seen before. Protecting us for the next half a century, she will be a highly versatile and potent force, capable of both humanitarian and disaster relief and high-end warfighting.”

Four weeks ago today HMS Queen Elizabeth sailed for the first time from Rosyth, under the authority of the Aircraft Carrier Alliance which is responsible for building and delivering the ship to the Royal Navy. Celebrating a number of firsts as we bring the ship to life, she has now had her first helicopter landing, first passenger boat transfer and first port call in Invergordon. The Ship’s Company, a crew of over 700 Royal Navy and 200 industry personnel, have settled in well to the routine of ship’s life.

The initial period of sea trials, expected to last around six weeks, will test the fundamentals of the ship. The trials are monitoring speed, manoeuvrability, power and propulsion, as well as undertaking weapons trials and additional tests on her levels of readiness. Last week the Defence Secretary announced the name of the first Type 26, HMS Glasgow, as part of the new City class frigates that will form the backbone of the Royal Navy until the 2060s.

HMS Queen Elizabeth is expected to enter Portsmouth to be handed over to the Royal Navy later this year.

Wow ! A statement from Michael Fallon that doesn`t mention a rising defence budget and a £ 178mill equipment plan.

Well spotted! My wait is over. Perhaps he was feeling seasick and had a momentary lapse of concentration.

Or maybe he was afraid of the laughter from HMS QE’s crew.

Nice to see big decks and fast jets back, but it was his party which scrapped the carriers and sold the Harriers in the first place, so that was a bit rich, I thought.

Very true – they’ve been responsible for huge and damaging cuts to all the services.

HF – And as I keep asking people who slag off the Coalition and Tories for the ‘cuts’:
“And who caused the economy to implode so these cuts were necessary?”
“And who caused a £35 Bn Black Hole in our Defence budget?”

Never seem to get a straight answer from those who can’t quite grasp the difference between cause and effect.

Not sure why you’ve got the cuts in brackets but the answer to your question ‘“And who caused the economy to implode so these cuts were necessary?” “And who caused a £35 Bn Black Hole in our Defence budget?”’ Is the Tory party’s main backers, the ‘city’, and their counterparts abroad. A world wide banking crisis caused by lax regulation here (still thought too tight by Cameron and the tories). The crisis began in the USA as the sub-prime crisis. and the collapse of the US bank Lehman Brothers. It spread here as the banks were all sailing too close… Read more »

The country is bust for one reason only, us the general public. Every election we here the parties say they won’t raise taxes and yet will increase public spending, these two can not happen without borrowing. The financial crisis just brought the problem to the surface, but the borrowing had been getting out of control for a long time and is still growing.

HF – The fact remains that Brown spent hugely in the good times, turned a surplus into a deficit and created massive debt before the crash. I never said he CAUSED that crash (although your version is quite hilariously wrong) but he so disabled our ability to borrow that when it happened it was like being attacked and finding we only had one arm. Selling half our Gold reserves at a giveaway price wasn’t too bright and was another resource he gave away when we needed it later. And as has been pointed out to you many times here if… Read more »

Chris I don’t think you grasp anything about politics if you think it was labour that caused the financial crash.

Unfortunately it was a lie the tories told, and was repeated by the right wing press ad nauseam.

KierenC – well thanks for the personal insult but I possibly know as much as you do. And where exactly did I accuse Labour of causing the financial crash? Once again a straw man response to avoid a straight question. My point was (and you know it) that to blame the Tories is blaming the doctor administering the medication and not the infection. Or to use another analogy the UK was up shit creek without a paddle. Now the Yanks may have started flooding that creek but it was Brown who overspent when he inherited a neutral / surplus economy,… Read more »

And meanwhile, the guy that put * in country, Fallon, has kicked off yet another defence “review” aiming to cut billions. Expect more planes, ships, tanks, sailors, soldiers, to be thrown away. Again.

Ron5 – Any sources for that rumour?

unfortunately the general public doesn’t even seem to understand the need for any military spending, they all think it should go to the black hole that is the nhs. this is why no government is willing to spend money on anything military regardless as to whether it is necessary or not (which it most definitely is) because quite simply its not a vote winner… needless to say if it all kicked off somewhere and we weren’t annihilated at the off, everyone would be running around screaming how could we let this happen…. its almost like we have forgotten how lucky… Read more »

Absolutely! Very well said and take the Falklands for example. The British public has every right to take pride in what our superb Armed Forces achieved but most are ignorant of the fact that it was a very close-run thing and the RN today is about 1/3 of the size it was then – if not less. I fear that the next ‘Falkland’s’ will expose to the British public the true extent of the non-stop cuts to the Armed Forces allowed under successive governments but by then it will be too late.

I’d agree about the ignorance of the public but the NHS isn’t a black hole, it’s just underfunded. We spend less than our western European counterparts – and far less than the USA – so the idea that it’s a black hole isn’t valid.

We can afford high quality services across the range – as long as we stop companies that make large profits here declaring them abroad, in Luxembourg, for example, to avoid paying the tax that is properly due.

The NHS is actually the most efficient first world healthcare system bar none. It’s only issue is that for the last fifty years it’s been under paid to the the tune of a couple of hundred billion pounds. The fact it’s managed to maintain life expectancy and infant mortality rates at the same levels of other systems ( while being a political football and crapped on by the press and government after government) is testament to: Very effective operational planning (contrary to the rubbish coming out of the press NHS management is the best in the business). Clinical staff willing… Read more »

This next defence review will surely make the country realise that far too much is being spent on military projects and what is being spent is on the unsustainable. The following is likely: a massive cut in the Royal Marines, disposal of Bulwark and Albion, to follow Ocean, a reduction in the F35 programme. This country cannot sustain this level of spending and more and more are beginning to recognise this.

There does not have to be any cuts, the money is there it just isn’t getting spent properly. There should be a public independent body that has total control over the defense budget, not aligned to any political party and not having BAE lobbying in their ear.

Don’t tell me there is no money when every single year we can find 13.5Bn to throw away in Foreign Aid!! Why is 0.7% GDP enshrined in UK Law for Foreign Aid spending? Totally irresponsible!!

well, it’s been growing under the tories, despite their claims, hence the massive increase in the national debt. Check the ONS figures for borrowing and you’ll see that it ballooned as a result of the banker induced financial crisis and has been made worse by ‘austerity’. labour have proved better custodians than the tories, and returned surpluses more times than the tories over the last 30 years or so.

HF – If you had any integrity you would accept the counter arguments many have laid against you and stop playing out your ignorance of the difference between ‘debt’ and deficit’. One has to assume therefore your deception is quite deliberate. The Tories never ever said they would reduce or stop ‘borrowing’ and therefore ‘debt’. They said they would reduce the annual ‘deficit’ and that is what they have done. Every year and it is now 75% less than when Labour left office. You totally misrepresent the facts by slipping in the wrong word here and there. It really is… Read more »

But Steve at least he’s worth a laugh on a dismal day.

David – And HF’s Corbynomics can raise a laugh …

HMG keeps making ludicrous statements to keep the public in the dark about how weak our forces are after decades of cuts & how difficult it would be to simply defend ourselves. Yes, a shiney new carrier(PTL!) but where are the “fast jets”? Only a handful, even in a few years time & those shared with the RAF. No cheaper Harriers to be going on with as we stupidly & recklessly decided we could do without them a while simply to save a few quid, years back. If the Tommies in WW1 were “lions led by donkeys”, it seems the… Read more »