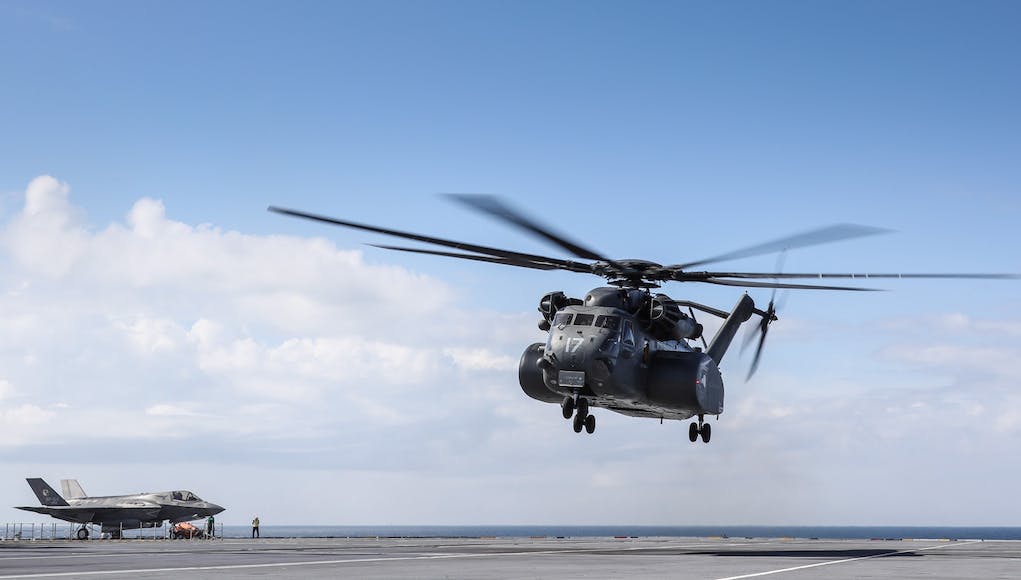 The Royal Navy say that the visit gave HMS Queen Elizabeth’s aircraft handlers the opportunity to work with the US aircraft and means they can now operate from the British carrier.

“Proving we can operate with yet more US aircraft on board gives us more flexibility and adds to our own capability.

It gives us a lot of options. It is another example of the fantastic relationship we have with our closest naval ally, as we are proving throughout Westlant 18.”

According to the US Navy, Sea Dragons are mainly used in counter mine operations and for delivery of equipment and personnel.

HMS Queen Elizabeth left her home port of Portsmouth in August, crossing the Atlantic to conduct the flying trials as well as training with the US Navy.

More than 1,400 sailors, flight crew and Royal Marines have been working on board the carrier during her deployment.

They’ll be landing F18’s next. It would be some craic if they managed to take off from the Ski Jump on low fuel.

We await the Kilo. 🙂

Didn’t they launch bombers from carriers in WW2?

Can a B-52 fit on this as I’d gladly give them £5 if they can manage to launch one of those.

Yes the Doolittle Raid after Pearl Harbour had US bombers launch from carriers, bomb Tokyo, then fly on to land in friendly territory in China.

Except those that run out of fuel short and were tried and beheaded by the Japanese. A sad end to what was effectively a propaganda effort.

Absolutely horrible fate for those guys, but it was also a desperately needed morale boost.

The Doolittle raid was not merely a “propaganda effort.” In addition to being a huge morale booster to the American psyche, it had profound strategic ramifications. As a direct result of the fact that the US had managed to bomb the Japanese mainland, the struggle between the Japanese Army with its China first strategy and the Japanese navy’s Pacific strategy was finally resolved after a decision by the Emperor to support the Navy. It was the Doolittle raid that led the Japanese Navy to formulate the plan to lure the American carriers into a decisive battle. Two months later that… Read more »

Europeans well behind on this.

Im a bit on the dark side here, what does the Sea Dragon do, why does the USN need a large heavy lift helo?? Follow up question, is it something the RN would require in future, could it be filled by the V22??

It’s used for mine sweeping and heavy lift, it can lift more than the Chinook, but I don’t see the RN ordering any as the Chinook can lift enough with going overboard.

We also already have quite a few Chinook’s and they’ve served really well so is there really any need to change now?

Isn’t the main difference from Chinook being that it’s designed for being used off ships and so is properly coated etc to avoid excess stress /rust etc on the airframes?

It also has fairly long range, and has been used in special operations using special rotors.

Apparently the CH53 is also a death trap. It has the worst safety record of any aircraft in the US inventory.

The CH-53 is not a death trap. Their per flight hour crashes are lower than most other aircraft in inventory. Problem is if one crashes you can lose a whole rifle platoon. Which skews the safety record considering the overall smaller number of airframes in service compared to say Blackhawks or Chinooks. Most of CH-53s in service are the Marine Corps E models which have been used the most and rode the most hard. They are very complex for a helicopter and combine this with the USMC’s favorite pastime of duct tape in lieu of spares you have accidents. Parts… Read more »

Elliot. Go to the Defensenews website they have an article about the huge rise in the number of aircraft accidents and there probable causes.

I prefer to actually read the accident reports. The number of deaths per flight hr statistics are computed over decades.
The CH-53s in service are mostly suffering from the problems of an aging fleet. Along with deferred maintenance due to the USMC being cheapskates when it comes to spare parts and slow about deciding to order the K-model.

I can’t help but think that the US is seeing the carrier’s as extra capacity for themselves on the free. Ok this is what the British amred forces have been for a while now, but this feels a little too obvious. Saying that we need them to avoid us looking stupid after buying two carrier’s that we weren’t in the position to defend or fully gear out.

Anyone that believes the whole soft power arguement of the UK has been drinking their own cool aid.

And, to be fair, the ‘extra capacity’ of the US armed forces has been serving our increasingly stretched country for, oooh, about 101-years. Indeed, there’s nothing knew whatsoever in our making the carriers available for USMC use. I know that, from day one, the carriers project always had an eye to maximising our relevance to the USA; it’s called reciprocity (think Trident missiles, intelligence sharing, USN Poseidon’s hunting Ruskie subs off Scotland for us). It’s not becoming obvious – it always has been obvious (and wholly accepted).

That is the truth of being a junior partner.

I wouldn’t get too excited by what has been happening over the last couple of days. It is just run of the mill interoperability trials, too ensure that nothing unforeseen can happen: after all the QE carriers are unique. The RAN went through a similar exercise with their new LHD ships.
For those who are curious the aircraft that bombed Tokyo was the B25 Mitchell and both the C130 and U2 have landed and flown off aircraft carriers.

Watched one of those land on the Promenade on Plymouth Hoe a few years ago not sure why it landed it stayed overnight and went the next morning,it seemed to be expected because a fence was erected around it soon after it landed,bloody impressive thing though the rotors were huge and the sound of it was something else.

Say what you like about Pompey, but please get the spelling right.

That’s because GUZZ is the codename…. shhhhhhh.
Type 26 is great news. Lets hope we get a lot more.

Blimey, they’ll be landing a Stars and Stripes on it next. Do the US land Merlin and Wildcat on their new ships to ensure interoperability? I’m sure it’s not the case, but it does look as if the US see the QE as something they can ‘borrow’ when required. But then I don’t suppose it will ever do anything in anger independent of the US anyway.

What is the biggest fixed wing utility aircraft that could feasibly operate from the carrier?

The 125 was mooted as a Gannet replacment for the CVA01.
The 146 as a STOL could have worked off a Nimitz but was never trialled as the proposed ramped twin tail variant was never built. Development went to the “quiet trader” with the side door.

The 146: They are getting very old now even BA are or have given all their’s up for the new gen Embraer and Bombardier/A220. I think you probably right though. It could probably pull it off. Issue would be take off with the ramp.

I think 32 sqn 125-700 are now retired/sold. A second hand 2011 125-900XP could be had for $4.5 million, if anyone was awake in Whitehall.
I think fitting cats to QE/PoW is too expensive/major rework. I would be interested to know if the advanced arrester gear could be fitted to the new UK carriers without too much fuss. STOBAR is not perfect, but gives you more options than just STOVL.
That new Pilatus PC-24 is billed as the 4×4 of business jets(ie. able to get into short airfields. That might be able to operate on a STOBAR converted QE/PoW.

Non really. There are no cats or traps so a large aircraft would struggle to land or take off

but there are specialist short field aircraft for use in wilderness and remote locations. What about those?

They are bush planes, they are not large aircraft really. They normally carry between 2-5 people. But yes they have very short take-off distances. I am sure they would fill their pants trying to land on a carrier though…

Slightly out-of-date info, but if the de Havilland Buffalo (TO 1040 ft) can do it possibly there are others out there that can.

The MH53 (the USN version) has 11 gear boxes in its transmission system which makes it very dicey if one goes. The aircraft also has mechanical flight controls vs fly by wire which can make it difficult for pilots to control at low altitudes which is where it conducts its primary minesweeping mission pulling a large sled behind it. Very old aircraft with lots of lfight hours on the airframes. They just rehabbed two out of DM after sitting in the desert for years to replace airframes lost in recent crashes. The USAF version – The MH53 Pavelow was a… Read more »

interesting that so many wild assumptions ate made from a single event! The help was simply trialing the deck at an opportunist time. There is no plan to purchase, C53, or tilt rotor craft. Incoming Crowsnest is extremely capable and will suffice. In addition, it is a myth that AEW / ASAC aircraft need to be as high as possible, if this was so then we would all be using satellites, likewise the RN ASAC deployed to Afghanistan as it was better suited than fixed wing AEW asserts in certain areas. QE will have many more visits from various aircraft,… Read more »