The Caimen 90 is being offered to Australia by BMT.

The firm say that the craft is able to operate at high speeds with heavy payloads, allowing faster amphibious offload from host ship compared with slower, more conventional landing craft. 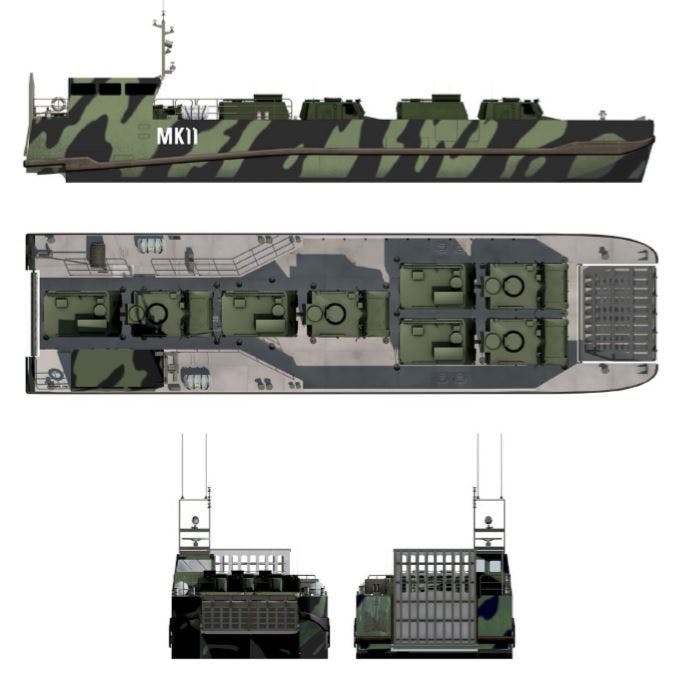 “A variant of this vessel is already being built internationally, which shows it is a proven hull form and design. The Caimen 90 represents a significant improvement on speed performance from previous landing craft vessels and is capable of traveling at up to 30 knots,” he said in a release.

“Additionally, features such as a tri-bow aluminum monohull and a bow and stern ramp, will allow for roll-on, roll-off capability, a key requirement for a modern landing craft. We are delighted to be able to offer this vessel to Australia” Mr Behrendt said.

Land 8710 Phase One is the programme to replace the Australian Army’s Mark 8 Landing Craft.

Just curious, I remember watching a program on the LCAC (or whatever it’s called) when I was a teenager, where the USMC said they could land on 90% of the world coast line compared to 10% of the worlds coast line using the conventional landing craft.
Obviously they cost a lot more but I couldnt understand why the likes of the UK do not order them off the US if we will only be purchasing a handful, as far as I know Albion welldock was built to accommodate one.

The Royal Marines only have 4 hovercraft, is that really enough? You would think they would be far more useful in many different situations landing most places easily, Great British invention.

On Bulwark you can get 4 x LCU into the Dock, 2 on each side of the center line barrier. To fit LCAC the barrier needs to be removed and you can only get a couple in. Removing the barrier alters the way the water in the Dock acts and causes issues with vessel handling. The noise and fumes from operating 4x LCU is bad enough. 2 X LCAC with GTs running and hoofing great fans would be horrendous. With only 2 connectors the ability to get material ashore becomes an issue. Whilst LCAC are quicker and bigger you have… Read more »

How many LCU remain please? I thought just 10.

BMT for all it offerings will not dislodge the BAE blinkers at the M.O.D.

And the Tide Class…

And the Queen Elizabeth Class…

The Aussie’s have some great kit and in good quantities relative to the size of their Armed Forces! For such a small nation, I was surprised to see their budget is not much smaller than ours ($39Bn vs our $49Bn) for FY19.

You must be using different currencies. The Australian budget is a lot smaller than the UK although they def get more bang for their buck.

You are both correct – good catch! Thank you for pointing that out. I agree BB85 – they definitely do get more bang for their buck and we could learn a lot from them.

Assumptions are often incorrect. Eg The “approved” budget to design & build 12 “Attack” class diesel submarines is AU$50Bn, ie $4.2Bn each or £2.2Bn. Compared to an Astute nuclear submarine, that is 50% larger @ about £1.6B. In fact, the word from Canberra is, the Australian subs will cost a lot more than budgeted to build. Not sure if that’s more bang for the buck.

Yes I saw that. Its been surrounded in contraversy too because the Australians selected a sub designed to be a nuclear attack sub but fitted with AIP engines (for politic reasons) which makes it a different beast entirely. The pump jet properly is designed to limit noise at speed not the 2 or 3 knots it will be traveling at to save its batteries. They should have teams up with the swede’s again but not changing the design when they don’t know what they are doing.

Not necessarily. While the UK defence budget is larger when spread out across the number of personnel in each respective nation Australia spends roughly 33% more then the UK per each soldier (Based on current rough exchange rates)(Only counting active service rather then reserve and ready reserve).

In US Dollars its c$27bn. So just over half the UK defence budget.

Maybe we should sub-contract their defence procurement specialists.

Maybe, but a (relatively) efficient procurement system and bi-partisan political support for defence are not the only reasons.

The Tigre procurement makes our WAH64 buy a bargain.

Imagine of if you reduced the population of the UK to about 40% of its current size then made your defence forces solely responsible for protecting the whole of western Europe up to the Russian border.

That is the geographic scale of the challenge the Australian Defence Forces faces. So we need every bit of that kit and then some.

I worked with an Australian, amongst my fellow RMP, there was only one or two that could match him. Magnificent soldier and MP. Should they all be like him, Australian is blessed.

Its about half the UK budget and they don’t have to pay for a nuclear deterrent out of that. They also have a smaller (but growing – so this will change) defence industry, so tend to buy more off-the-shelf products than UK, investing less than we do in R&D for new sovereign systems. They also have to deal with a greater regional threat – there is a major arms race ongoing in the Asia/Pacific region, and increasing tensions and militarisation of the South China sea, and North Korea of course. Australia is playing catch-up with China, India and Indonesia, and… Read more »

The stated Australian defence budget for FY1920 is AU$38.7Bn, which represents approximately 1.9% of GDP. The UK defence budget, converted to AUD is about $75Bn at the current rate of exchange.

I agree with GUNBUSTER’s comments

I think if this is chosen for the Aussies the RN seriously needs to look at this craft. The current LCU is too slow at 10knts, to protect amphibious ships in the first you really need to be about 40nm or so out. This design would change hours of transit to the beach to under 1. I agree with the LCAC comments although fast the footprint is significant and counter acts its speed. That’s the beauty of this design its similar sized to existing LCU but travels at 3-4 times the speed. I also think that the RM need to… Read more »

We have tried a new LCU design that was fast and carried the same load as the current craft. Its introduction into service was not moved forward as it had serious issues. As I said the use of LCU by the RM is not just for landings. They are used as mother ships and are used in the riverine role something that a hovercraft is not suited to. A Griffin is a pure troop carrier only. No Vehicles. Its also a bit of a maintenance hog compared to an LCU. Anything manned and used by Royal needs to be “robust”… Read more »