Boeing recently hosted 37 companies from Boeing’s UK supply chain along with representatives from the UK Government.

The group is visiting Seattle to grow further the UK partnership. The visitor companies range from small- and medium-sized enterprises (SMEs) to UK-based multinational companies.

The visit builds on orders for P-8A Poseidon maritime patrol aircraft and AH-64E Apache helicopters from the UK Ministry of Defence.

Sir Michael Arthur, president for Europe and Managing Director of the company in the UK and Ireland said:

“The UK is a critical source of high-quality suppliers for Boeing, across both our commercial and defence businesses. Since 2011 we have more than doubled Boeing’s spending with UK suppliers. As we deliver Boeing’s growth plans for the UK we are working with the Government to ensure we also provide additional opportunities for our partners in the supply chain.”

“This supplier conference is a key milestone in the UK’s partnership with Boeing, which was announced at the Farnborough Airshow earlier this year.

The UK government wants to see UK suppliers winning more work directly from the company and this event will provide a real opportunity for some of our highly capable civil and defence aerospace suppliers to engage directly with Boeing’s decision makers.

We look forward to continuing our work with Boeing as it grows its business in the UK and strengthens its ties with the wider UK civil and defence industry.”

More than 250 UK companies are suppliers to the company and in 2015 the company spent £1.8 billion with them, supporting more than 12,700 jobs in the tier one UK supply chain alone.

When will we begin receiving our first P-8? 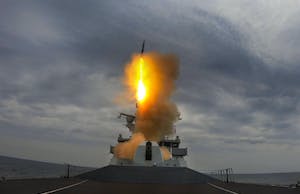 May 31, 2021
HMS Dragon has fired her missiles off the coast of Scotland in order to shoot down a target but don't worry, it's just an...

Royal Navy using A.I to speed up shooting down missiles