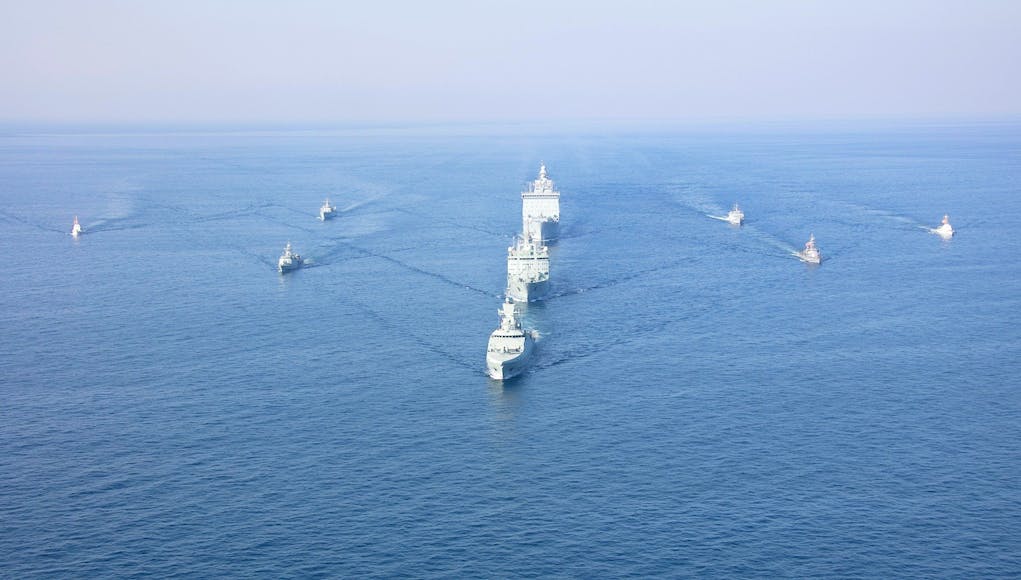 RFA Cardigan Bay, acting as mother ship to all four Royal Navy minehunters in the Middle East, was joined by HMS Bangor and Ledbury for the exercise.

The Omani hosts threw their patrol ships Al Dhafirah, Al Muazzar and Al Bat’nah into the mix according to a Royal Navy release, alongside the French destroyer, two US Coast Guard patrol boats and two fast coastal protection ships for the four-day workout.

The exercise centred on a fictional scenario, taking place in the Gulf of Oman, in particular the waters off the capital of Muscat which had been ‘mined’ and needed to be rendered safe to allow shipping to get in and out.

“I would say the biggest take away is learning the capabilities of our coalition forces,” said Information Systems Technician 1st Class Lavashti Washington, communications officer on board fast patrol ship USS Hurricane.

“Hopefully I’ll get to participate next year and take what we learned this year and build upon it to get even better.”

The exercise culminated with a simulated air attack on the entire naval force. The Chevalier Paul, as the task group’s air defence ship protected the vessels.

“It is always fantastic to visit Oman, and even more of a thrill to have had the opportunity to exercise with our close partners, the Royal Navy of Oman,” said Lt Cdr David Armstrong, chief-of-staff of the RN mine warfare force in the Gulf.

“With the threat neutralised and the minehunter force having provided safe passage in and out of port, the exercise concluded having proven the ease with which the different nations can operate together.”

Question for anyone whos knowledge about the subject, are mines that common these days or even effective? I’m not that well versed on the subject but I haven’t heard of mines having much success since WW2.

Fairly common, dozens of nation can deploy them if needed. They are fairly effective in their explosive potential, USS Tripoli an Iwo Jima class LHA was damaged by an Iraqi contact mine during the Iran Iraq war as was USS Princeton (Tico) but they are most effective in denying the enemy the freedom to move. It takes a very long time to detect and then destroy a single mine. The USMC abandoned an amphibious assault during Desert Storm because it would take 3-5 days to clear the mines in the area and they where within range of shore based artillery.… Read more »

I know they can close a water way to all shipping or a harbour as well.