A British RC-135 ‘Rivet Joint’ intelligence-gathering aircraft has once again been monitoring Russian forces near the border with Ukraine.

It should also be noted that these flights are designed to be visible so that the public and Russia know they’re happening.

Earlier, we reported that there has been an increase in the frequency of British RC-135 aircraft being deployed to the Black Sea region near Ukraine’s border with Russia. The frequency in recent weeks has become almost daily, up from weekly last year.

🚨 NEWS | A British RC-135 'Rivet Joint', a dedicated electronic surveillance aircraft, is once again off the coast of Crimea near the Russian border. The UK has been increasing the frequency of such flights in order to gather intelligence about the build-up of Russian forces. pic.twitter.com/zlpUruMR8H

British surveillance aircraft being over the Black Sea near Crimea isn’t unusual but as above, we are seeing a significant increase in the frequency of the flights over the last few weeks. American assets are also present.

Other British aircraft in the region

According to a statement given by the Defence Secretary in the House of Commons today, the 17th of January 2022.

“As of today, tens of thousands of Russian troops are positioned close to the Ukrainian border. Their deployment is not routine, and they are equipped with tanks, armoured fighting vehicles, rocket artillery, and short-range ballistic missiles. I can today confirm to the House that, in light of the increasingly threatening behaviour from Russia, and in addition to our current support, the UK is providing a new security assistance package to increase Ukraine’s defensive capabilities. We have taken the decision to supply Ukraine with light, anti-armour, defensive weapon systems. A small number of UK personnel will also provide early-stage training for a short period of time, within the framework of Operation ORBITAL, before then returning to the United Kingdom.

This security assistance package complements the training and capabilities that Ukraine already has, and those that are also being provided by the UK and other Allies in Europe and the United States. Ukraine has every right to defend its borders, and this new package of aid further enhances its ability to do so. Let me be clear: this support is for short-range, and clearly defensive weapons capabilities; they are not strategic weapons and pose no threat to Russia. They are to use in self-defence and the UK personnel providing the early-stage training will return to the United Kingdom after completing it.”

You can read the full statement here.

A little update on the previous story: 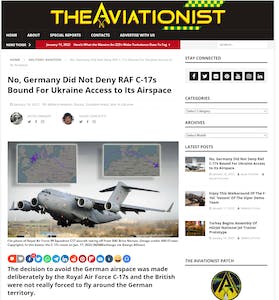 Wonder how hard it is to keep these aircraft running. There 1960’s aircraft. I guess with the e-3 sentry it was the kit inside that was knackered and the actual airframe.

Should be not the actual airframe 🙈

FYI:
I use the following website Ukraine interactive map in which to see what is happening. Its quite good and if you click on the icons it will take you to the story (on the right) which includes a link. Ive used their sister sites for Syria/Libya/Iraq and Yemen: 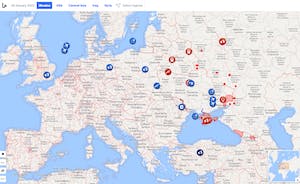 Which if you click on the bottom of the two blue aircraft in the North sea you will be rewarded with this: 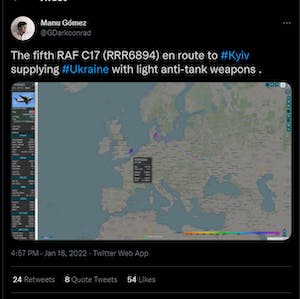 The disciples asked Jesus an interesting question: “Tell us, when shall these things be? and what shall be the sign when all these things shall begin to be fulfilled?” (Mark 13:4, Douay-Rheims 1899 American Edition) He answered: “But ye will hear of wars and rumours of wars. See that ye be not disturbed; for all [these things] must take place, but it is not yet the fulfillment [of the sign].” (Matthew 24:6) The global nuclear war, (this will be the fulfillment of the sign of Jesus), will start with an ethnic conflict: “For nation will rise against nation”, like as… Read more » 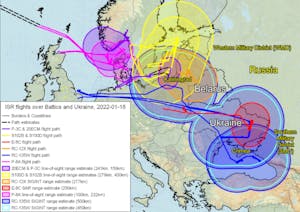 It’s not looking good at the moment, a strong unified hand is required.

“US Secretary of State Antony Blinken arrived in Ukraine on Wednesday amid mounting fears that a Russian invasion of Ukraine could be imminent.

Mr Blinken was due to hold discussions with President Volodymyr Zelensky in Kyiv, before meeting European allies in Berlin and his Russian counterpart in Geneva on Friday.

Russia has repeatedly denied planning to invade neighbouring Ukraine.
But senior US officials say Moscow could attack at “any point”.