HMS Queen Elizabeth and her Carrier Strike Group joined ships from NATO Standing Maritime Groups One and Two for an impressive display of maritime power in the Eastern Atlantic on the 28th of May 2021.

The rendezvous was part of Steadfast Defender 21, a large scale defensive exercise designed to test NATO’s ability to rapidly deploy forces from North America to the coast of Portugal and the Black Sea region. 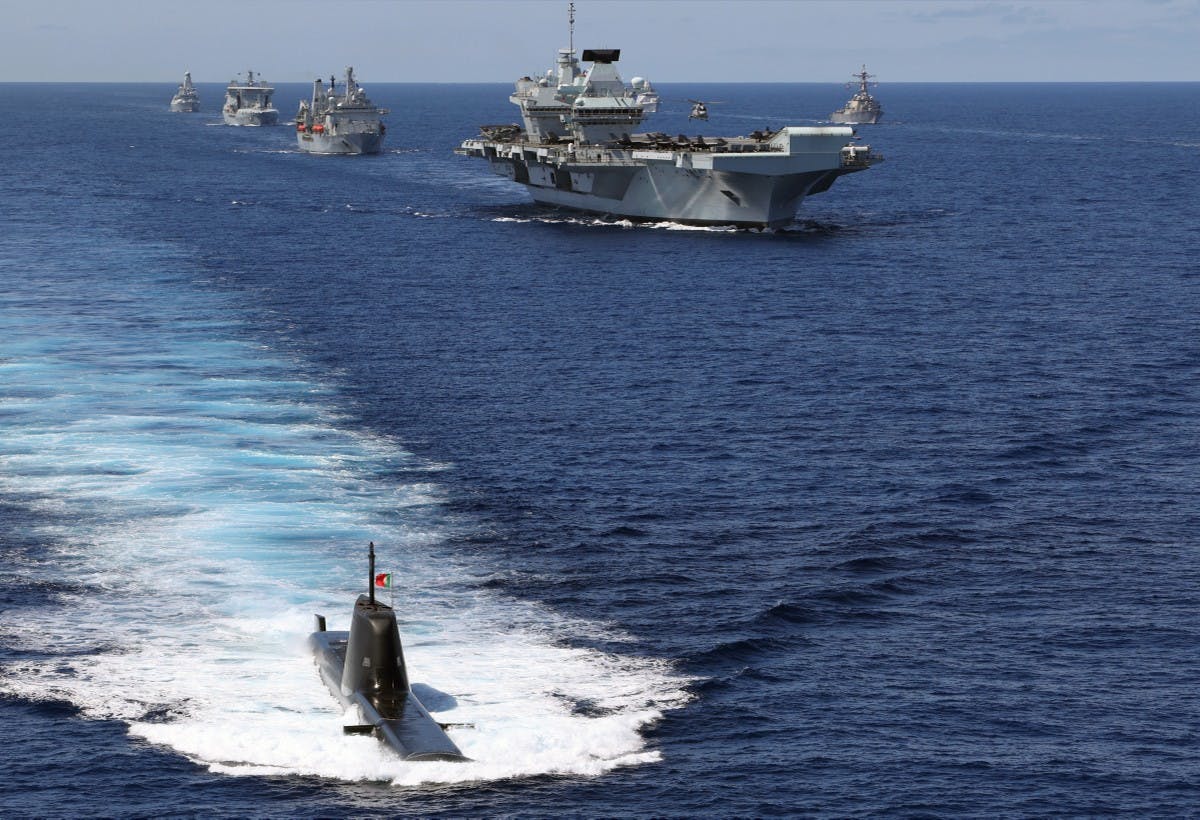 The Strike Group includes ships from the United States Navy, the Dutch Navy, and Marines from the US Marine Corps.

This is the largest deployment of Fifth Generation Fighter Jets at sea in history.

I live on the southern Algarve coast. Does anyone when the group will be transitting to Gibraltar? I’d love to see them on the horizon.

Too late I’m afraid, she’s already in the Med

Strange how it wasn’t the RN’s own Astute boat on show in that formation.

Everyone knows its there, its been publicly confirmed, so I can’t really understand the reluctance to give the silent service a little bit of recognition before the strike group tour begins proper..

Maybe its doing its job.

I suspect you will have one astute here and a different one (or same passing all the way around Africa) will meet it east of suez. Or do astutes ever go through the suez? I know other subs have but do our nuclear powered ones go thru?

RN SSN’s have transited through the Suez Canal in the past DRS, you may remember Superb making the news in the Red Sea shortly after passing through the canal.﻿ 🙄 ﻿

Ah yes just had a look and jolted the memory, Superb was no longer superb after hitting a pinnacle in the Red Sea and was brought to early retirement. Thanks for the clarification and reminder – I had searched but did not see an astute going thru hence the question.

Steadfast Defender 2021 Is happening off the coast of Portugal, so it makes sense that one of their Tridente-class is on show. Potential the astute has not been involved in the exercise and is off having fun elsewhere.

It’s probably busy shadowing a Russian sub that’s following the group, and avoiding giving itself away by posing for a photo.

A recent article in Warships IFR went as far as it could, i.e. without official confirmation, to advise that a US attack boat is reported to be ‘present’.

I wonder if the new 200 million pound flagship was built now , would it be deployed with the carrier group to promote British interests .

Readily understood the rationale for ‘UK One’ flight, which in any case appears an efficient usage for the A330.
But cannot yet square this vessel despite referencing sites like Thin Pinstriped, etc. It’s not a RY either though utilising an RN crew, we’re advised.
If it’s somehow directly funded by the private sector, at least in part, or has a role as a genuine medical facility outside of wartime i.e. somewhat like USNS Mercy, then maybe so. Though that role seems at odds with the released ‘current concept’.

If is built I think it should be paid for by the Government, crewed by the Merchant Navy or RFA and when not being for trade shows . It could be used as a training ship for seamanship skills for the Merchant Navy RFA or Royal Navy .