Britain is now able to deploy a combat capable Carrier Strike Group anywhere in the world.

“All elements of the group from fighter jets to radar systems to anti-ship weapons have been successfully brought together and operated. Both the air and naval elements of the CSG have now met this milestone, which includes qualified pilots and ground crews being held at short notice for carrier-based operations and trained to handle weapons and maintain the equipment.

Another marker of success at this stage includes the ability to deploy Anti-Submarine Warfare capabilities such as frigates and destroyers, as well as both fixed and rotary wing aircraft including Merlin helicopters to operate alongside the carrier.”

“This is a hugely significant milestone for HMS Queen Elizabeth, the Royal Navy and the whole country. This achievement is a testament to the determination of our service personnel and industry workforce who have delivered this first-rate military capability, a capability held by only a handful of nations. I wish the entire Carrier Strike Group well ahead of their first operational deployment this year.”

Full operating capability for the CSG is expected by December 2023, say the MoD. 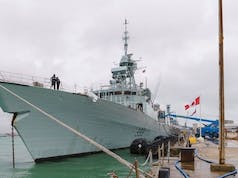 Great news but still no AEW…

Nor effective AShW missiles. Nor adequate missile defence onboard the carrier. Nor a full fighter wing. Typical bloody government

He is right. Unless you tell me that “operational” is just Sir Humphrey slang for: we can do navigation without crashing into each other…

So what am I missing?, We have world beating T45 Destroyers, Fantastic T23’s with the world beating 2087 sonar. Harpoon is still in service, with a interm replacement planned from 2023 onwards. SeaViper, SeaCeptor, CIWS or DS30 on all assets including 3 Phalanx and 4 DS30 on the carrier. The deadly Astute class subs with TLAM capability, and 24 5th gen all aspect stealth strike fighters to fly off the deck, backed up by the very capable Merlin helicopter and 3 x Crownsnest systems. And the finest trained men & women to operate all this kit to ever put to… Read more »

I’d anticipate initial Crowsnest AEW presence during the Spring, though F35 is not bereft on that front in any case.
Maybe two submarines will go along to add further tactical uncertainty for the Politburo. Could be two of ours, or one UK / one US; or maybe an Aussie Collins on the surface with ours below.

I think 3 Crownsnest systems will deploy with QE this year, but they are not declared operational. And yes, F35 brings massive ISTAR capability and wide area surveillance. 👍

Great news. Remind me again how many serviceable F35B we have.

21 at the moment (I believe 3 of which are currently in the US for training/intergration purposes). 617 sqn could deploy half the numbers if necessary but the desperately slow buy rate really isn’t helping nor is, as Rob pointed out, the lack of AEW. Still, by the time the CSG sails we might have a few more F35s

If we speed up the buy rate now we will be stuck with too many block 3 airframes which are unable to use Meteor/SPEAR 3 without an upgrade to block 4 past 2024.

Boom!
Have an up vote.
Finally someone who gets what the F35 buy is about.

I also suspect that the speed of acquisition is also impacted by the relativly slow US production rate.

Are the USMC F35s onboard too?

17 in fleet and flying last time I checked

They have NO AEW when is crows-nest operational

IOC for Crowsnest is September 2021, though 3 pre-IOC kits will be on board for the 2021 group deployment.

well not quite it needs some push fit fittings replacing for the fire system,which i cannot believe they used in the first place for a high pressure system,bit like using plumbing pipe for compressed air in a workshop..

It cannot actually be push fit. It wouldn’t pass the shock test. It might be something like a slide collar Compressed fitting with the compressing done by bolts. It **might** actually be that the quality of the tube is too high and it is too hard for the compression rings to bite into it. Or that the tube used is too inflexible so when it is shocked it puts all the forces on the connections. Or that it is an issue with the wider pipes which are inherently stiffer. Or I could be totally wrong! It can be an issue… Read more »

I feel like I have ventured into a plumbing site.

Shouldn’t have gone to Screwfix for the fire main fittings!

Point to note; this is Initial Operating Capability which is obviously NOT Full Operating Capability so some key elements are going to be missing. Apart from the issues about AEW and aircraft numbers the ship/group is supposed to be on 5 days notice to sail operationally. However, QE is still along side in Portsmouth undergoing her latest capability insertion so I think IOC may be a few week previous. As they have said on Save the Royal Navy it would take a “hercilean effort” to get QE and the other ships of the group ready in the event of a… Read more »

Slightly off topic, But the Koreans have decided to build a light carrier (40000 Tonnes) I quote: South Korea Officially Starts LPX-II Aircraft Carrier ProgramThe information which was first reported by local media JoongAng Ilbo means that after about a year of preliminary planning and debate, the program is now officially underway. This ship is expected to enter service with the Republic of Korea (ROK) Navy in 2030. As we previously reported, LPX-II will prioritize aircraft operation over amphibious operation and will have not have a well deck. It will also not feature ski-jump and will have two islands. Primary aircraft will be… Read more »

Slightly off topic, But the Koreans have decided to build a light carrier (40000 Tonnes) I quote: South Korea Officially Starts LPX-II Aircraft Carrier Program The information which was first reported by local media JoongAng Ilbo means that after about a year of preliminary planning and debate, the program is now officially underway. This ship is expected to enter service with the Republic of Korea (ROK) Navy in 2030. As we previously reported, LPX-II will prioritize aircraft operation over amphibious operation and will have not have a well deck. It will also not feature ski-jump and will have two islands.… Read more »

Interesting they Suggest no Ski – Jump ?.

I just read that. Why design a carrier from scratch for STOVL planes with no ski-jump?! It’s a needless handicap of the aircraft’s take-off weight at least, maybe they aren’t planning on flying planes with any actual weapons on board?!

Wot no leaks? Operational after a fashion -propped up by the USA
Meanwhile, the other leaky boat Prince of Wales can’t make the voyage to the US so will be staying at home

And saving 2 mil in trials and fuel costs. Are you saying they should go after they have fixed the pipework issue?

Sometimes its better to keep your mouth shut and be thought a fool than open it and remove all doubt.

I still believe the Brits would have been better off purchasing or even ”renting”, two or three of of the Kittyhawk CV’s. They would have then been able to put together a real strike group using F/A-18’s. Instead of this so called carrier with the ‘wonder plane’ be all do nothing well F-35. It may not have been cheaper…but it certainly would have been more effective.

Glad to have you as a full naval ally into the next decade. We just may need it with China