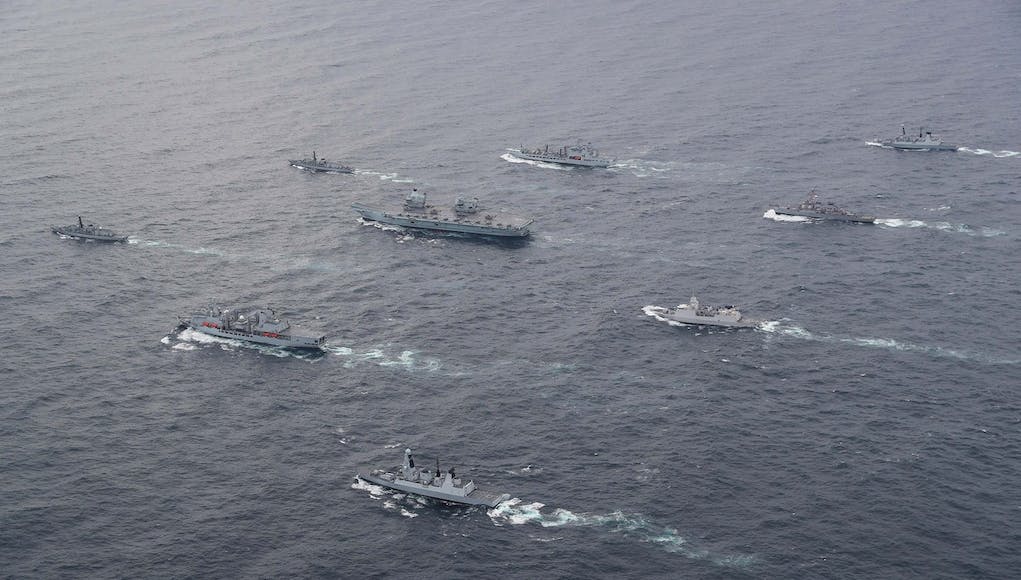 The strike group is the largest and most powerful European-led maritime force in almost 20 years.

The Ministry of Defence say that the deployment is expected to include two Type 45 Destroyers, two Type 23 Frigates, two Royal Fleet Auxiliary logistics vessels and a submarine ina ddition to an American destroyer and potentially other allied vessels.

“The task of protecting an aircraft carrier involves many ships, submarines and people. A Carrier Strike Group has an escort in the form of Type 23 Frigates and Type 45 destroyers, giving the strike group the ability to defend against above and below the sea threats. The Royal Fleet Auxiliary also play a vital role, keeping the strike group replenished with food and armament. The Queen Elizabeth-class carriers will be deployed with up to two operational Lightning squadrons and 24 F-35Bs on board, with a maximum capacity allowing for up to 36.”

You can read more about the specifics of the Carrier Strike Group here.

Get ready for the SNP’s vitriolic ranting ….
Bless em, they get more Trumpesque by the day….

As we’d say in Ireland, they’re a bit touched.

They certainly are a bit touched Patrick, detached from reality and never letting the facts get in the way of whipping up resentment….

I would be interested to see how many Scots are actually serving in the ships of the CSG. I would bet that in percentage terms it will be higher than the percentage of Scots in the UK.

Wasn’t a group CertEx scheduled for March/April 2021, or have plans changed?

Great article shame about the Anti Scotland tone shown in the comments below/above.

That’s what happens when the Scottish electorate choose to indulge their casual anti-English bigotry by continually electing a political party run by and run for casual anti English bigots.

Sadly, the snp keeps getting elected because nearly all the nationalists votes goes to 1 party, whereas the Unionists votes are split between 3 major parties.

Can’t really see any anti Scottish posts there! Stay in the union keep on building our ships,leave and you won’t simple fact of the matter.

And trying to make it clear to snp/indy supporters the real consequences of leaving the UK, especially relevant regarding shipbuilding as this is a defence blog.

It’s a bit rich for Scots to complain about anti-Scottish attitudes when all we hear from Scotland thesedays is one long,anti-English whinge about how hard done by they are being imprisoned in the Union.

On the internet, any anti Scottish sentiment is nothing more than keyboard warriors but in Scotland, The anti-English/UK vitriol is official SNP policy!

Mac I really think you’re confusing the views of a small political party with the diverse views of all Scots. Perhaps it’s time to remind some UKDJ posters, once again, that the SNP is not Scotland. Ms Sturgeon simply runs a minority SNP administration in Edinburgh looking after some powers devolved to it by the UK government. The majority of Scots do not vote for, “a political party run by and run for casual anti English bigots”. At the last General Election in 2019, 54% of Scots who took part voted for Pro-UK parties – and only 46% for the… Read more »

But the problem is wee Ms Krankee, has the ear of the media. She’s in “control” and she has the majority of the house in her pocket. Until, somebody who isn’t touched in the head my some romantic fantasy and understands the harsh reality of economics can be the leader of the opposition. We will constantly get this vitriol. What happens if she loses indyref2, will she go down the same road as Trump and claim there was voter tampering? In some respects she and her party are like the Argentinian Junta, lets start up a campaign that gets the… Read more »

I think the problem is Alan that the SNP have really embraced the modern spin politics of blame and hate, copied and pasted from Trump…

They have rather successfully blamed the English and Boris for everything that’s wrong in Scotland, while doing a fairly shit job of running the Scottish schools and hospitals … I do hope you are right regarding people coming together to fight them….

“stay in the union and keep building our ships” would suggest that Scotland is allowed to build ships as a favour.

“You can take our Ship Building but you’ll never take our Whiskey” springs to mind !

Shame Scotland is so demanding to stay in the EU, by doing so the US tax on whiskey will never be lifted. It was almost removed in a UK/US trade agreement before the riots just before trump left scuppered it.

Wonder what Sturgeons opening line is going to be about this:

Its a breach of covid rules

We are being invaded

Or maybes something even more over exaggerated than usual.