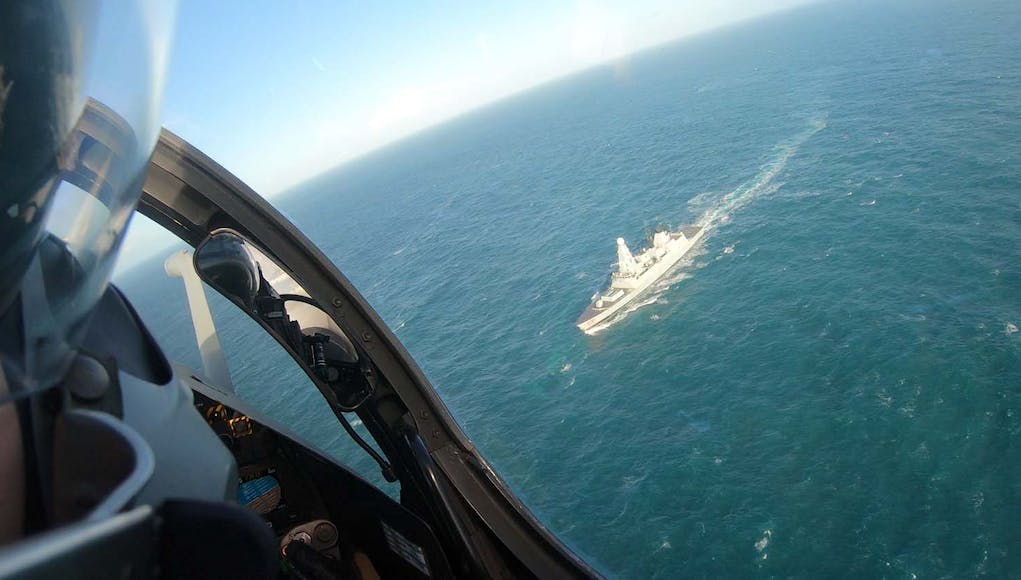 Don’t worry, HMS Dragon was only being put through her paces as part of training.

The Royal Navy say here that the Type 45 Destroyer took part in a number of scenarios including simulated attacks from fast craft and from the air.

“The Type 45 destroyer was tasked with protecting the fictitious Freeport – what Plymouth is known as during training exercises like this – from any danger during an intensive three weeks at sea. Despite poor weather in the Channel, Dragon was able to complete a variety of serials, testing her abilities across all warfare disciplines.

All of this was part of HMS Dragon’s FOST period. Fleet Operational Sea Training ensures the ship and her crew are ready for anything as they head on missions. As part of the training, the ship faces a loss of capability to see how her sailors can adapt when radars, weapons or communications go down.”

HMS Dragon is continuing with further training around the south coast.

I feel confident both T45 and T23 can defend themselves from air attack. I am less confident the RN can return fire. We are neither vessel yet has the interim AShM and the F-35Bs have to approach a target to within the glide range of Paveway.

Well, I believe that both get fitted with Harpoon cannisters if they go anywhere “hot”- even if they are rather an old system. USN Burkes don’t get anything different, and French and Italian destroyers have the same number of AShMs in cannisters, of a newer type though. F-35B needs Brimstone (except that’s not in the plan, as far as I’m aware) and Spear 3 quickly, as you say it’s just Paveway at the moment. Unfortunately I don’t think that Paveway can hit moving targets unless they’re being lased. The only other option is Wildcat with Martlet and Sea Venom, which… Read more »

Purchase LRASM, fit to our surface ships via cannister/Mk41 vls, and integrate it on F35B – it will give the RN the truly formidable capability it so badly needs.

Can’t see it with money being tight, isn’t it more than double price of other options

I thought the intention of the interim anti ship missile purchase was for only five ship sets. Has/will this change?

As far as I’m aware, that is still the plan. It makes some sense, we’ll never have all of our escorts at sea at the same time, but we should be able to equip all of our escorts that can put to sea at the same time if we had to- so maybe 2-3 extra sets. I don’t think we would have more than 8 escorts able to put to sea at once, not for a while at least.

I wonder if the Hawk T1 crash was linked to this exercise? Seems everyone had a lucky escape both the aircrew and people on the ground.

Hawks fly most days around Cornwall, like they do in Somerset and Anglesey and many other places. Unlucky incident that happens from time to time.

Wonder who came out on top the Type 45 or the Attacking jets ?

The T45. The normal scenario is an ADEX 451 which simulated Missile Launching aircraft with Jammer support targeting you. That’s normally done by Falcon jets fitted out with Electronic pods and a cabin full of electronic wizardry. The Hawks then come in flying close to the falcons. The falcons either turn away or join the hawks and tank in simulating missiles homing heads. It then turns into an ADEX 323 which is low level attacks by FGA to test upperdeck gunnery and direction teams against FGA aircraft attacks. A T45 ESM teams probably heard the interplane frequencies on the tarmac… Read more »