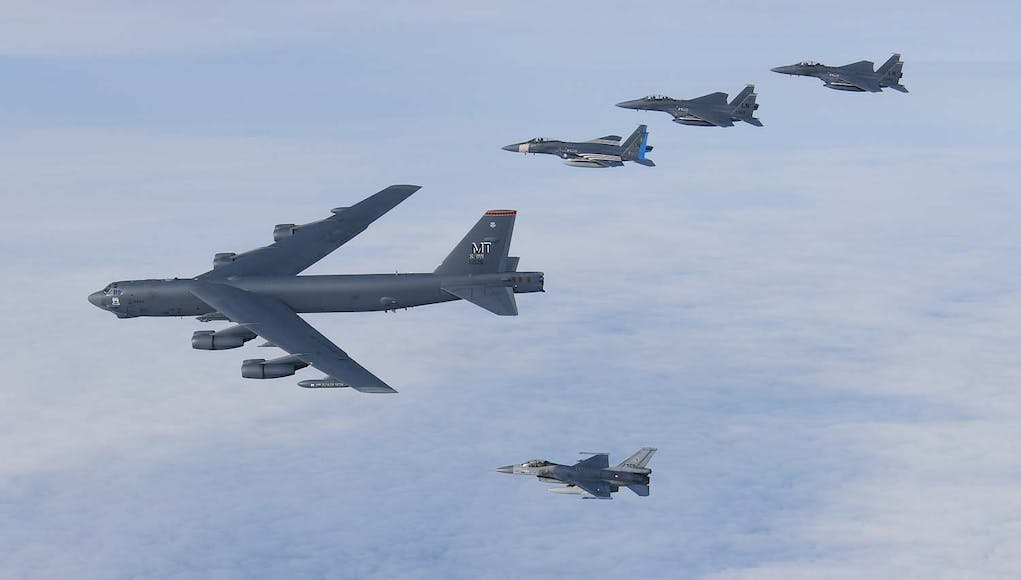 The Royal Navy say that naval aviators grappled with 50 fighters and bombers over the North Sea to hone combat skills before joining HMS Queen Elizabeth for autumn exercises.

“Eighty years since the Battle of Britain reached its climax in UK skies, British, US and Dutch jets have ‘joined battle’ for the latest Point Blank exercise. British, American and Dutch F-35 stealth fighters shared airspace with RAF Typhoons, US Air Force F-15 Strike Eagles, F-16s and even mighty B-52 bombers, while RAF Voyagers and American KC-135 Stratotankers kept fuel tanks topped up to allow the dogfights to continue.

Held every few months, Point Blank focuses on the ability of British and American air power to fly and fight side-by-side. The latest iteration of the exercise – the fourth held this year – expanded to embrace the Dutch (who operate the conventional, land-based version of the F-35, the A variant, rather than the ‘jump jet’ B version flown by the RN, RAF and US Marine Corps), while the Americans have also brought in two F-16 squadrons from Italy.” 617 Squadron and the US Marine Corps VMFA 211 Squadron F-35s are due to embark on HMS Queen Elizabeth in a few weeks for the final workout of the ship and her broader task group before they deploy for the first time in the new year.

No question the Americans will require that one is involved if the QE travels into vaguely contested waters with US jets onboard.

I was thinking that, but I’m surprised one won’t sail the whole deployment. Anyway it’s good the UK can demonstrate we can and will sail alone globaly if needed.

F16s, plus don’t forget the u2 currently at Fairford.

You can bet that Russia and China will be watching.

Realistically how many jets could the UK operate at one time?

Obviously there’d be stuff like tankers, and awacs but how many Typhoons and F35 could be scrambled if we suddenly for whatever reason felt the need?
Could we get 36 up in say, 30 minutes?

Probably not that many as there are only a few QRA aircraft at the two active Typhoon bases, and I’m pretty the F-35’s are not part of the QRA force. They took part in this exercise as part of the their preparation for deployment on the QE. How quickly the second line of aircraft could be made ready I’m not sure but if memory serves it is somewhat longer that 30 minutes as they would have to be armed and pre-flight checked etc. before they are ready to go. Even then am not sure how many could be readied quickly… Read more »

We are amateurs JR. We do this in our very limited free time and sometimes have to rely on the assumption that quotes we’re given are correct.