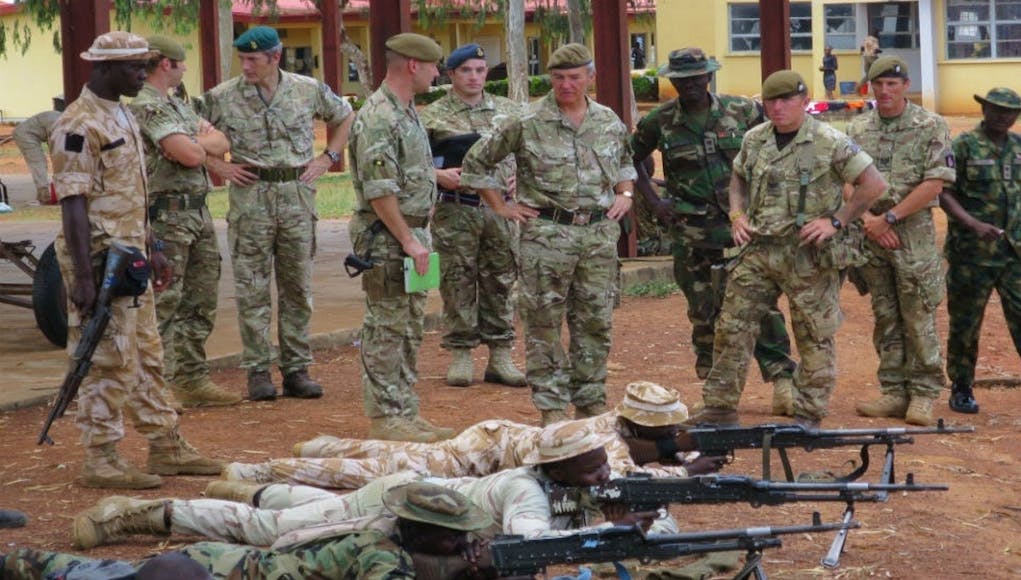 Britain’s partnership with Nigeria provides the Nigerian Armed Forces with the necessary skills to tackle and defeat terrorist organisations and also aid to thousands of displaced civilians.

The relations between Britain and Nigeria are still robust and receive a growing attention by the Foreign and Commonwealth Office. The history of both countries is closely linked, as Nigeria was part of Britain’s empire until October 1960 when it achieved its independence and, signalling the future friendly relations towards Britain, joined the Commonwealth of Nations as a monarchy. In 1963 the country became a Commonwealth republic and was suspended from the organisation between 1995-1999 due to human rights abuses and undemocratic policies carried by the military junta that ruled the country.

Since then, Nigeria has been facing new threats to its stability and recently established democracy, an example is the Islamic extremist terrorist group Boko Haram, which in 2015 declared its allegiance to the Islamic State. Boko Haram operates mainly in Northeast Nigeria and also bordering countries like Niger, Chad and the Northern part of Cameroon. Since 2009 more than 20,000 people were killed and roughly 2.3 million were forced to leave their homes. The terrorist actions also made more than 250,000 Nigerians flee into nearby countries.

Britain deploys successive Short Term Training Teams (STTT) to aid the Nigerian Armed Forces to improve their readiness and forestall possible attacks from Boko Haram. The British forces in the country train especially the Nigerian Air Force (NAF) in how to defend their bases from the increasing threats of terrorist groups.

This training is performed by the No. 5 Royal Air Force Protection Wing from the RAF Lossiemouth and generally, have the total duration of six weeks. With 66 personnel involved, the June 2017 deployment was the third in a five-year programme. According to the Ministry of Defence, alongside the No. 5 Force Protection Wing, the 51 Squadron of the RAF also helps to enhance the Nigerian Air Force’s skills ‘in improvised explosive devices (IEDs), tracking insurgents, identifying weapons caches and navigation’. Besides, they also train the capabilities of the Nigerian Army ‘on improving ground-to-air coordination’.

Beyond the RAF’s efforts in the country, the British Army also has its share. One example is the deployment of the Corps of Royal Engineers and troops from a Regiment to Nigeria in 2016. The Royal Anglian Regiment trained the Nigerian Army and Navy during a four-month deployment at the Nigerian School of Infantry. Similarly, Engineers from the 101 Engineer Regiment shared their expertise that has been tried and tested in their deployments to Iraq and Afghanistan, focusing on how to disable Improvised Explosive Devices (IEDs).

In total, more than 350 British troops currently train the Nigerian Armed Forces with around 6,000 troops being benefited by Britain’s training programme in the country since 2015. As declared by the British Government, the programme also offers ‘medical training, infantry skills, media operations, command and leadership, and support to Nigerian military training schools’.

The primary objective of the British Training Teams in Nigeria is to provide the country’s Armed Forces the necessary skills to tackle and defeat terrorist organisations and, therefore, improving the safety and quality of life of millions of Nigerians that suffer in the hands of terrorist groups like Boko Haram.

Furthermore, the British presence in the country also helps to improve the military defence cooperation of both nations. The defence links are growing strong after decades of stagnation, and the training teams play a crucial role in enhancing these ties between Britain and Nigeria. The experience obtained by the troops deployed are unique to improve their capabilities, thereby, although the British personnel is sent to teach there is a lot to learn from their Nigerians counterparts.

In December 2016, it was officially announced by the British Government the creation of a regional British Defence Staff for West Africa, which will support the Nigerian Government in fighting terrorism. This defence staff is based in Abuja, Nigeria’s capital, and represents a permanent British commitment to the country.

On the economic side, the UK has been developing a growing assistance to the country. As declared on April 2017 by the British High Commissioner to Nigeria, Paul Thomas Arkwright, the British Government spends ‘just under half a billion UK pounds each year on development assistance in Nigeria’. In 2016, the results of British aid to the country are displayed by the delivery of ‘food assistance to more than 1 million people’, medical treatment of approximately ‘34,000 children at risk of death from severe under-nourishment’, providing essential household items to more 225,000 Nigerians who have fled their homes and access to clean water and sanitation to roughly 135,000 people.

Therefore, Britain’s ongoing commitments with Nigeria goes beyond the military field and helps to improve the quality of life of many ordinary Nigerian citizens throughout the country, especially in areas afflicted by terrorist groups. The British support for Nigeria’s democratic system is also relevant, for one of the objectives when training the Nigerian Armed Forces is to legitimise their role in helping the country’s democratically elected leaders, paving the way for a more stable and prosperous British partner in West Africa.

So, the British relations with Nigeria are deepending, and through military and economic partnership both countries benefit with strengthened links. On the one hand, the defence cooperation through the permanent British Military Advisory and Training Team (BMATT) and by the successive Short Term Training Teams (STTT) is essential to scale down the threats of terrorist organisations and is also an opportunity to exchange of skills between the British Armed Forces and the Nigerian Armed Forces. On the economic aspect, Britain and Nigeria are working together to increase bilateral trade and to remove from poverty millions of Nigerians. Thus, this cooperation is yielding fruits for both countries and still have a greater potential to be developed in the years to come.