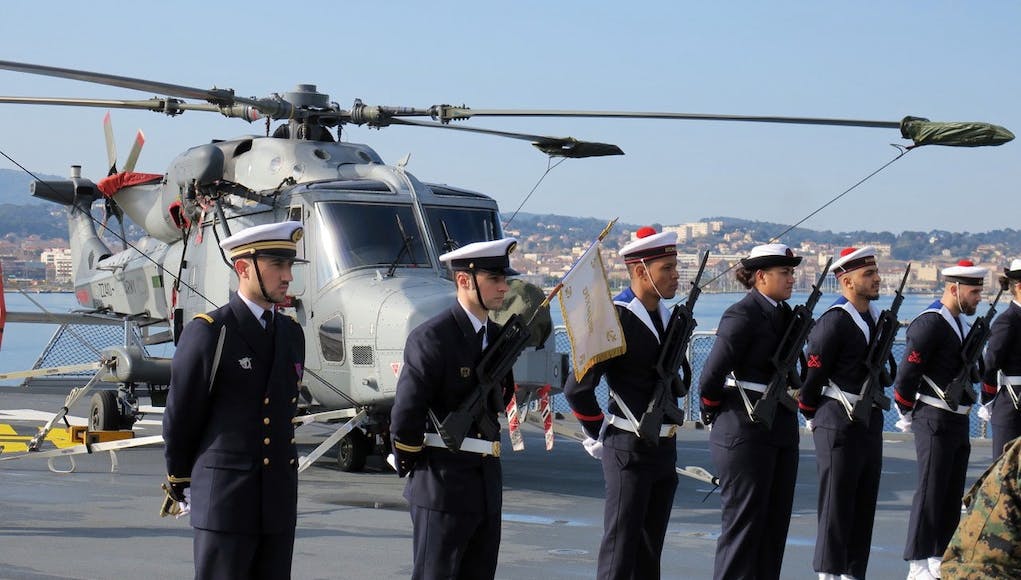 British forces are taking part in a French naval deployment to the Indian Ocean and Far East, say the MoD.

According to a press release, 40 Royal Navy and Royal Marine personnel and two Wildcat helicopters have joined a French naval task force for a five-month mission.

The flagship of the deployment, helicopter assault ship FS Dixmude, left her home in Toulon today bound the Middle East and ultimately the South Pacific.

“The 30-strong detachment of Brits, led by Lieutenant Mike Wells, left home at RNAS Yeovilton last week for the two-day flight down to the south of France to join 50 US marines, two Spanish Cougar helicopters and 133 French officer cadets who are beginning their operational training.

The UK’s contribution to France’s annual Jeanne D’Arc naval deployment demonstrates a shared commitment from both countries to enhance their maritime cooperation in home waters and around the world, in support of global security and prosperity and protection of freedom of navigation.

This priority was agreed at the UK-France Summit in January 2018.”

The deployment is part of the UK’s programme of bilateral defence cooperation with French forces, which includes the development of the Combined Joint Expeditionary Force, a rapidly deployable joint UK-French force that can respond to crises.

British and French forces also operate together as members of NATO, with France agreeing to contribute troops to the UK-led enhanced Forward Presence battlegroup in Estonia in 2019.

Ah yes, whilst the French government does its best to fuck us over at every chance in the Brexit talks, we go through the pretence that they are a friendly nation…they’re really not you know.

We don’t have to blame the French we do a really good job ourselves When will you people realise we can no longer do defence on the world stage alone We need all the help we can get!!

Andy – Sorry but mac is dead right. They need British support in a wide variety of operations and are happy to play the ‘partner’ in matters military but when it comes to EU politics they are as nasty a bunch of bastards as you could wish to meet. Now I don’t think we should NOT take part in military operations like this as it helps our own training before any agreement (or not) is reached but we should maybe remind the French and Germans just who is the strongest European player in the military game right now. And I… Read more »

Is it just me or does that Wildcat have “Army” on the tail boom? The 40 sailors and RM personnel will not be happy with that! 🙂

It does. I zoomed in.

But if that Wildcat is from 847 NAS which supports CHF those are pooled under the 34 “Army” AH1 variants with 1 Regiment AAC, so not a naval variant like the 28 Wildcat HMA2’s for the RN.

The UK tries to have everyone over too. Every country is the same. The UK is a master at dirty tricks though…….and illegal wars.

LOL. Thing is though. Every country does the same. Do you expect the UK to not play the game and just sit round the campfire singing Kumbaya like a good Corbynista or actually stand up for itself in this difficult world and do unto others before they do unto you?

What did you think?

Thank Christ the second world war wasn’t illegal,or was it?

Mac, you are dead right. Perfidious Albion? Totally untrustworthy Gallic two faced gits who still smart from their shamefacing in WW2. Get over it. It happened.
Peder noted, irrelevant.

Will the French be conducting freedom of navigation sailings by the Spratley islands?

The French and Germans regard the British as an Ally. Its a pity some Brits still regards some of their European neighbours with such bias disdain. You are ALL suppose to be neighbours and Allies!!!